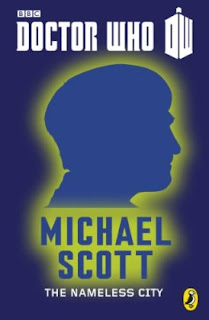 Puffin continued its year-long celebration of Doctor Who earlier this year with the release of The Nameless City, a short story featuring the Second Doctor as portrayed by Patrick Troughton. Since I came to the show via the Ninth Doctor, I've never really had the opportunity -- or, frankly, the curiosity -- to learn more about his earlier incarnations until this year, when celebrations surrounding the show's fiftieth anniversary have led to the release of specials, short stories, and novels featuring the first eight Doctors. Prior to the release of this short story, I'd never heard of author Michael Scott -- but after reading his contribution to the 50th Anniversary celebrations, I'm thoroughly impressed with his style and imagination.

Referred to as the "cosmic hobo," here the Second Doctor appears to be more whimsical than his predecessor, very suggestive of the childlike wonder Matt Smith is capable of bringing to the role as Eleven. Within the pages of Scott's story the Second Doctor is joined by long-time companion Jamie McCrimmon (played by Frazer Hines on-screen), an eighteenth-century Scotsman and one of the Doctor's longest-serving companions, appearing in well over one hundred episodes. I LOVE the idea of the Doctor having a long-term companion from a historical time period relative to whenever the show aired. The creative possibilities for introducing an eighteenth- or nineteenth-century native to not only future worlds but the twenty-first century and its people and technology are endless! It's an avenue I dearly hope the showrunners for New-Who consider, as I think it could breathe fresh life into this dearly-loved series.

More so than in the case of Colfer's First Doctor story, I feel as though Scott has succeeded in writing a story that hits the right balance of appealing to New-Who fans while avoiding the temptation to project the show's later mythology onto one of the Doctor's first incarnations. This story very much feels as though it could be an episode of the show, different enough in tone and style to distinguish it from the reigns of Nine, Ten, and Eleven whom I know fairly well. *wink* The Archons were suitably creepy villains, and I loved the glimpse of the unnamed Master, operating in the shadows. If the Doctor and Jamie's on-screen relationship is half as interesting as I found it play out in this story, I definitely need to make time to become better acquainted with Patrick Troughton's Doctor. Very enjoyable!

When Jamie McCrimmon brings the Second Doctor a mysterious book, little does he realise the danger contained within its pages. The book transports the TARDIS to a terrifying glass city on a distant world, where the Archons are intent on getting revenge on the Time Lord for an ancient grudge. 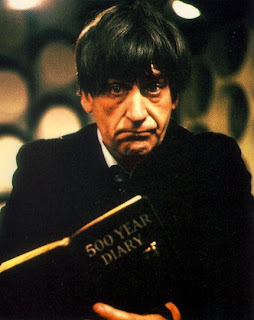