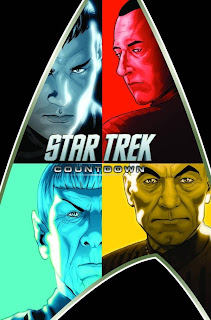 Star Trek: Countdown was released as the official graphic novel prequel to the 2009 film that relaunched the franchise -- and kick-started my own love affair with the classic characters of Kirk, Spock, and the rest of the Enterprise crew. This slim volume is a fast read, taking place entirely within the confines of the "classic Trek" universe, detailing the threat that leads to the Romulan Nero's single-minded quest to destroy everything Spock holds dear. While I first fell in love with the Star Trek universe thanks to the film that follows the story laid out in this volume, it wasn't until Into Darkness was released that my new-found love for the characters in the Trek universe blossomed into a full-blown obsession that drove me to seek out ancillary product like this graphic novel.

The artwork is gorgeous -- I particularly appreciated the detailed renderings of an older Spock Prime and the evolution the Eric Bana-portrayed Nero undergoes, from dedicated family man to vigilante. While the actual mechanics of the star's implosion and the use of "red matter" is thinly-realized at best, I appreciated the perspective and backstory on the classic universe developments which led to the events that unfold in the new-Trek universe in the Abrams film. There's the Vulcan/Romulan tension that Spock Prime has been working so hard to diffuse, and welcome appearances from The Next Generation characters such as the Enterprise's erstwhile Captain and now Ambassador Picard, Geordi, Worf, and the ever-logical Data. Having laid the groundwork for the re-booted characters I've come to love, I look forward to exploring further volumes in this series!

The countdown to the motion picture event of 2009 begins here, in the exclusive graphic novel prequel to Star Trek, the upcoming blockbuster film from Paramount Pictures!

JJ Abrams, Roberto Orci, Alex Kurtzman, Mike Johnson, Tim Jones, and David Messina present the origin of Nero, the mysterious Romulan who will ultimately threaten the survival of the entire universe. Don't miss this story that brings Star Trek back to the big screen!
Posted by Unknown at 6:44 PM