Review: The Edge by Rudy Josephs 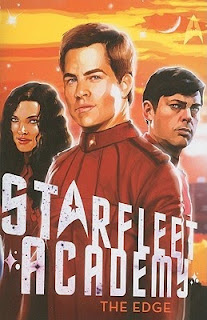 Offering a glimpse into the lives of Kirk, McCoy, Spock, and Uhura before the events of the 2009 J.J. Abrams film that relaunched the Star Trek franchise, the Starfleet Academy series continues with its look at the cadets' school days with The Edge. For some inexplicable reason, the publisher elected to release The Edge, which clearly covers the first few months the quartet spend at the Academy, after The Delta Anomaly, when they are well-established in their studies, Academy routine, and relationships. As one who tends to read series from start to finish, releasing even category fiction of this ilk out of order like this is jarring to say the least, and in this case unfortunately colors my overall opinion of Josephs' single entry (to date) in the series.

The Edge confronts Kirk, Uhura, and McCoy with the rigors of Academy training, forcing Kirk in particular to assess whether or not the rules, regulations, and expectations placed on the cadets by the Academy brass are indicative of the life this erstwhile free spirit wants to lead long-term. The first challenge facing Kirk's class of cadets is the desert survival race, setting the precedent that winning is everything. Kirk narrowly misses claiming victory, taking consolation in the fact that he's met Lynne, a gorgeous and driven fellow cadet. As weeks pass, and Kirk sees cadets destroy their lives all in the name of a bid at Starfleet glory, he's forced to evaluate just how far he's willing to go to carve a name for himself in the Academy's annals in his own right, outside his famous father's legend.

While I like the overall concept of Kirk, Uhura, and McCoy being forced to evaluate the personal cost of succeeding in their chosen field -- the discussion of the effectiveness (or lack thereof) of the honor system at the Academy felt reminiscent of some of the moral conundrums tacked by Classic Trek -- it does not translate into an engaging storyline. Joseph opens the novel strong with the desert survival race, but then the forward momentum of that event fizzles as Kirk and company settle into the routine of Academy life. The characterizations of the four main players are fair to solid relative to their Abrams' film counterparts, but here Uhura and Spock fare best. While jumping back in time series-wise was jarring, I loved seeing how this series envisions Uhura and Spock's first meeting and the way in which they bonded over each being outsiders in their own way when compared to the Academy norm.

The Edge provides many moments fans of the new incarnations of Kirk, Spock, McCoy, and Uhura will enjoy -- from Uhura's initial flirtation with Spock (all in the name of practicing "small talk") to the loyalty to McCoy that drives Kirk to act when the former's reputation is threatened. Josephs sketches each of the principle players in a manner that is faithful to their on-screen counterparts, particularly when it comes to Kirk's bravado and Uhura's intense focus. While the character moments fail to outweigh the plot's uneven -- and oft-times sluggish -- pace, The Edge is a pleasant enough diversion if one wishes to while away a few hours in the company of the future Enterprise crew.

A new Starfleet Academy series for teens--filled with romance and adventure! In The Competitive Edge, Kirk finds out how much of a toll the intense training classes and grueling schedule of academy life is taking on all the cadets, including himself. But some recruits seem better equipped to handle the challenges. Is there something that is giving them an edge? Kirk is determined to find out, especially since one of the cadets with a little something extra is his new girlfriend.
Posted by Unknown at 6:26 PM