Review: The Spear of Destiny by Marcus Sedgwick 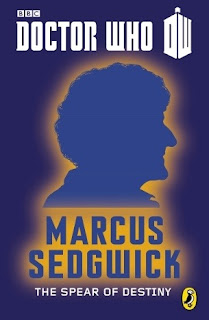 The third entry in Puffin's yearlong series of short stories celebrating Doctor Who's fiftieth anniversary has introduced me to yet another author whose work I am determined to explore further after trying this sample. Marcus Sedgwick, author of the Raven Mysteries, was tasked with bringing the third incarnation of the Doctor to life, as played by John Pertwee for most of the 1970s. While I am only passingly familiar with Pertwee's Doctor, based on appearances alone I've always suspected he was rather a deliciously eccentric aristocratic type. In doing some reading about the Third Doctor's tenure after reading this story, I thought it was fascinating that Pertwee's tenure was often characterized by intrigue and spy capers, inspired by popular television programs of the time such as the long-running The Avengers. Sedgwick brings the spy caper quality of the era's television shows to bear within the pages of this short story, one that sees the Doctor embark on a museum heist and once again face one of his greatest foe.

The Doctor's companion here is Jo Grant (played in the series by Katy Manning). Jo was a junior operative with UNIT (United Nations Intelligence Taskforce, later the Unified Intelligence Taskforce), an elite paramilitary group dedicated to fighting extraterrestrial threats to the Earth's existence. I was fascinated to learn that the UNIT which figured in new-Who episodes such as "World War Three" and "The Christmas Invasion," as well as the spin-off series Torchwood and The Sarah Jane Adventures, had its origins in the classic Who stories. UNIT was notably featured in the Third Doctor's run, and having the Doctor operate under its auspices fits neatly within the realm of television spy show tropes such as CONTROL in Get Smart or The Man from U.N.C.L.E.

Here the Doctor and Jo are tasked with stealing a spear thought to be the Norse god Odin's spear, the legendary Gungnir. Unable to retrieve the spear in the 1973 present, the Doctor and the delightfully ditzy Jo travel back to its last known point of origin -- the Viking age. Given the current popularity of Thor, this story's exploration of Norse mythology is particularly fresh and relevant. Touching on the idea that myths and legends have their origin in fact, and mixing the presence of the Master and his sinister machinations into the historical record, Sedgwick delivers a fresh, entertaining short story just begging to be made into an episode or a full-length novel. (Note to the show's producers: I would LOVE to see the Doctor visit the Vikings or something similarly new -- I love Victorian England and all but the Doctor has ALL of time and space to work with, let's remember that!) Following this highly entertaining introduction to the Third Doctor I see myself checking out episodes from his era at the first opportunity!

The Third Doctor and Jo Grant are trying to track down the magical spear of Odin when they find themselves caught up in a vicious battle between two Viking tribes. But one of the Vikings is even more dangerous than he appears to be. Can the Doctor stop the spear getting into the wrong hands before it's too late? 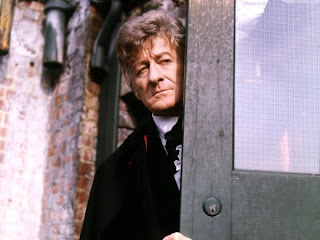