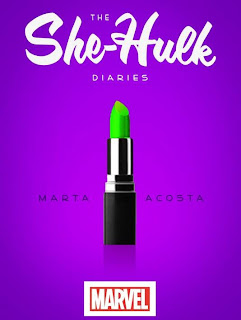 Though I have only a passing knowledge of She-Hulk's presence within the Avengers universe (i.e., I know she exists), when I learned that Marvel was releasing a series of chick lit-style novels featuring some of their most famous heroines, I was immediately sold. I mean, if this novel does well they might release one starring Black Widow, right? Puh-leeze?! But I digress. *wink* Two parts Bridget Jones and one part superhero action film, The She-Hulk Diaries introduces Jennifer Walters, a single, business-like, and currently out of work lawyer trying to balance her personal and professional life. She particularly struggles to reconcile the part of her life that involves morphing into a six-foot-seven green Amazon with a penchant for partying and wanton destruction with the dedicated lawyer who'd like to meet a guy more into her than her secret green alter-ego. But keeping her real life separate from her superhero life soon proves to be harder than she realized, as her new dream job puts her on a collision course with the man that got away years earlier, and her new high-profile case demands both Jennifer and Shulky work together to save the world.

There are times when nothing but a breezy chick lit novel will do, and here Acosta takes the tropes of the genre and spices them up with a healthy dose of superhero-related shenanigans. I loved the diary-style, first-person format. Jennifer has an fairly entertaining, self-deprecating sense of humor (the OMG!'s are way overused, however), and her resolutions for a better, more fulfilling life -- right down to the ridiculous, constantly moving, self-imposed "deadline" -- would be engaging enough without the presence of She-Hulk. But add a green, party-loving superhero who refuses to act with tact or discretion befitting a top-level attorney, and you have the (potential, at any rate) for chick lit comedic gold.

This novel prompted me to do some quick reading on She-Hulk's history, and while Acosta's take on the iconic character can hardly be seen as definitive, based on a cursory reading of the character's biography the cases and supervillains Shulky encounters does not seem entirely out of place within the character's overall canon. For the very casual fan, such as myself, it works. I was particularly intrigued to learn that during the John Byrne-penned "Sensational She-Hulk" years the character was known for breaking "the fourth wall," a self-aware characteristic that dovetails nicely with the diary format Acosta use to tell her She-Hulk story.

While fans with more knowledge of Jennifer Walters' history than I can debate the merits (or lack thereof) of Acosta's interpretation of She-Hulk, overall I enjoyed this fresh take on the popular superhero conceit, otherwise typically limited to comics or films. While I thought Acosta went a tick too far in illustrating the initial differences between Jennifer and Shulky's personalities, in playing to the tropes of a chick lit novel I appreciated the manner in which so much of Jennifer's growth trajectory as a character involves coming to terms with her superhuman persona -- embracing both the strengths and weaknesses of her duality. With all-too-brief nods to other touchstones in the Avengers universe -- the Mansion, Tony Stark's womanizing ways, Hawkeye, and Black Widow -- The She-Hulk Diaries is a fluffy, light-weight summer entertainment. With more polish and inclusion of other Marvel legends, this is a concept that could be a lot of fun -- and I hope I get the chance to see that play out with other characters.

JANUARY 1
CURRENT STATUS: No job, no boyfriend, no permanent place to live, no car, and most of my clothes are held together with staples and duct tape. Bank account almost wiped out. Many of my former associates have expressed a desire that I never darken their doorways again for legal and financial reasons.

She-Hulk got us got us kicked out of the Avengers Mansion. People keep posting videos online of her New Year's Eve shenanigans: twirling, flaming telephone poles in Times Square, climbing the Empire State Building while dangling Anderson Cooper, dancing wildly at parties, and commandeering a motorcycle cop's ride to do wheelies across the Brooklyn Bridge. Saying there are two sides to Jennifer Walters's personality is an understatement. When she hasn't morphed into a 650-pound, crime-fighting, hard-partying superhero, she's a single lawyer trying to get her act together. Hilarious and action-packed, The She-Hulk Diaries tells her story, as she juggles looking for Mr. Right and climbing the corporate ladder by day with battling villains and saving the world by night. Maybe she'll finally take on a case that will define her career. Maybe she won't meet one Mr. Right, but two, and she'll have to choose. Maybe bad guys will stop trying to destroy the planet so she can read her Perez Hilton in peace.
Posted by Unknown at 2:57 PM

This sounds like a really fun read! Thanks for spotlighting this book, Ruth. I've not read any Marvel books but considering my well documented love of their superheroes, it might be fun to do so at some point. ;)

I have not of She-Hulk. I have heard of Marta Acosta, though. :)