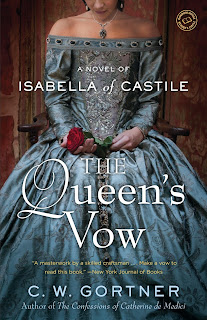 Isabella of Castile was never meant to be queen. Today an image of this formidable Renaissance monarch has survived that is alternately admired for her contributions to art, literature, and education, or castigated for her role in bringing the notorious Inquisition to Spain and the forcible expulsion of those Jewish subjects who refused to renounce their faith and embrace Catholicism. Arguably -- and understandably -- much of the focus of history is on the darker aspects of Isabella's reign, a legacy shrouded in ominous tones, particularly since, in the ensuing centuries, society has by and large removed itself from the strictures of a life led by the demands of one's faith. As he did so superbly with his novel exploring the life of the controversial Catherine de Medici, within the pages of The Queen's Vow Gortner brings to life a vibrantly complex Isabella, a woman who is very much a product of her time while managing to defy the conventions of the same that would seek to proscribe the roles of women to the hearth and home alone.

The only daughter of Juan II of Castile, Isabella was preceded in the succession by her older half-brother, the dissolute Enrique, and her younger brother Alfonso. Following their father's death, their mother reviled at court, Isabella and her brother became wards of the king, but lived in veritable exile in a shabby shadow court in Arevalo. Her sheltered youth comes to an abrupt end with the birth of a niece -- a child Isabella and her brother, as the only other claimants to the Castilian throne, are required to swear fealty to -- an oath whose legitimacy is called into question by rumors of the infanta's dubious parentage, called further into doubt by Enrique's sexual preferences and his wife Juana's thinly-veiled regard for a certain courtier. Shocked by the profligate excesses she encounters at court, the devout Isabella finds herself thrust into a battle for her very life. When Alfonso becomes the unwitting pawn of nobles seeking to oust Enrique, Isabella becomes a virtual prisoner in a delicate dance for her life, one where she must respect Enrique as king while disdaining his policies and remain defiant of those who would seek to make her a pawn on the marriage market. When the unthinkable occurs, the girl never meant to rule becomes heiress to a crumbling empire, with the vultures circling, each side determined to claim her as a powerless pawn of their cause. But Isabella has a strength within her as yet untapped, and the princess who was only ever meant to make at best a strategic marriage becomes a ruler who will not be gainsaid, a queen whose force of will and dreams of empire refuse to be denied.

Love her or loathe her, the Isabella found within these pages is an extraordinarily compelling woman. In an age when queens -- if they came to the throne -- were expected to be controlled, she determined to chart her own course, going so far as to arrange her own marriage against the explicit wishes of her half-brother. While it is generally believed that Isabella did not meet her husband-to-be, her cousin Ferdinand of Aragon, until their wedding day, Gortner takes some license with the record to suggest an earlier meeting between the two, a moment in Enrique's court which plants the seeds of a relationship that would blossom into a love story for the ages. While there was an undeniably strategic political advantage to their union, benefiting both parties and their respective kingdoms, theirs is a life-long partnership that transformed the trajectory of their people -- for good or ill -- forever. Theirs is an electric partnership, fraught with tension, but in the end a "marriage of true minds" -- a ground-breaking union where each cherished and valued the contributions and strengths of the other.

Gortner not only succeeds in bringing the past to vibrant life, but in making me care about his characters -- at one moment left in awe of Isabella's strength, at another moment heartbroken as choices are made that will live in infamy. He excels at recapturing the humanity of women oft-times maligned by the historical record, never excusing or dismissing a controversial action, but rather restoring such to within its proper context. For a fifteenth-century Catholic monarch like Isabella, the dictates of the church were the literal alpha and omega, the beginning and the end by which all decisions are measured, and heresy and dissent in matters of faith are not to be tolerated. By understanding the fallibility of Isabella's now legendary, larger-than-life persona, and restoring her humanity -- her brilliance and her short-comings -- he delivers an unvarnished, compelling portrait of a woman who fought for the right to determine her future and strove to live out her faith in the best way she knew how, for good or ill. While the consequences of allowing the Inquisition into Spain or of the expulsion of the Jews aren't fully analyzed, the agony and fear that went into Isabella's decisions are fully explored, resulting in a perfectly-realized portrait of an imperfect, but compelling woman.

In The Queen's Vow Isabella emerges as a fully-realized, multi-faceted woman, a compelling and contradictory mix of tradition and ground-breaking, forward-thinking independence. With a meticulous attention to detail and a deft hand for period mannerisms and dialogue, Gortner excels at bringing Isabella and her world to life on the page. He is the rare author capable of balancing his audience's modern sensibilities with a soul-deep understanding of the the time in which Isabella lived, a gift of restoring the triumphs and short-comings of his leading lady, capable of elucidating her motivations and fears with a compassionate and clear-eyed touch. A Gortner novel is an experience to savor, and Isabella's story is no exception -- by turns exhilarating, maddening, and heart-breaking. I can't wait to see where Gortner takes readers next!

Isabella is barely a teenager when she becomes an unwitting pawn in a plot to dethrone her half brother, King Enrique. Suspected of treason and held captive, she treads a perilous path, torn between loyalties, until at the age of seventeen she suddenly finds herself heiress of Castile, the largest kingdom in Spain. Plunged into a deadly conflict to secure her crown, she is determined to wed the one man she loves yet who is forbidden to her -- Fernando, prince of Aragon. As they unite their two realms under "one crown, one country, one faith," Isabella and Fernando face an impoverished Spain beset by enemies. With the future of her throne at stake, Isabella resists the zealous demands of inquisitor Torquemada even as she is seduced by the dreams of an enigmatic navigator named Columbus. But when the Moors of the southern domain of Granada declare war, a violent, treacherous battle against an ancient adversary erupts, one that will test all of Isabella's resolve, her courage, and her tenacious belief in her destiny.

*Thanks to Historical Fiction Virtual Blog Tours for the review opportunity!
Posted by Unknown at 5:41 PM