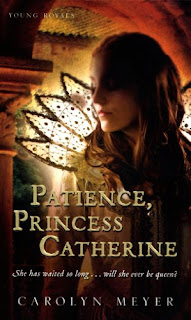 Patience, Princess Catherine is Carolyn Meyer's YA retelling of Catalina of Spain's early years in the Tudor Court, her marriage, teenage widowhood, and subsequent years-long struggle to see her promised betrothal to her one-time brother-in-law, Prince Henry, realized. Framed by chapters where an older Catherine, victim of King Henry's attempts to see their marriage dissolved, Patience, Princess Catherine is a diary-like reminiscence of Catherine's arrival in England, interspersed with brief passages from Henry's point-of-view.

Having just finished Philippa Gregory's The Constant Princess, I sadly found this fictional retelling of Catherine's life sorely lacking. While Meyers does an adequate job sticking to the historical record in that Arthur is viewed as weak and sickly, his marriage to Catherine left unconsummated, facts alone do not a compelling story make. Meyers' incarnation of Catherine is curiously lifeless -- there is no suggestion of the vibrant queen who reigned at Henry's side for over twenty years, who fought for her marriage and position. Catherine here is immature, easily swayed, and -- thanks to the diary-like format of most of the novel -- frankly boring as there is no well-formed narrative, only a dry recitation of events punctuated by fictional insight into Henry's psyche.

Given the inevitable tragic conclusion of Henry and Catherine's marriage, the insight Meyer's attempts to provide into Henry's youthful view of Catherine suggest -- in this context -- that Henry harbored a passion for his first bride. Whether or not this is in fact the case, Meyer's writes Henry with the voice of a man much older than ten years of age when the book opens. Not only does the tone feel off, but these passages in particular are riddled with distracting spelling and grammatical errors, with words misspelled, misused, or omitted altogether.

Patience, Princess Catherine is a textbook introduction to Catherine and Henry -- the research is there, but these larger-than-life characters are stripped of their life and vibrancy, left colorless, pale shadows on the page. Between the characterizations, awkwardly-executed narrative, and abundance of distracting editorial mistakes, I was left rather underwhelmed by this offering in Meyer's Young Royals series. Hopefully, subsequent volumes in the Young Royals series will succeed in bringing history to life on the page in a more vibrant, engaging manner.

England anxiously awaits Prince Arthur's betrothed--the Spanish princess who will be its future queen. But when Arthur dies not long after the wedding, Catherine of Aragon's fate becomes uncertain. Will the king and Catherine's parents arrange a marriage with Arthur's brother, Henry, or will she return to Spain a widow? Through all this turmoil, the young princess's resolve remains unshaken. She will one day be England's queen . . . no matter how long it takes.
Posted by Unknown at 11:25 AM