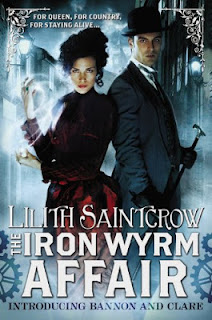 Just when Archibald Clare, unregistered mentath, thought the boredom levels he was suffering might prove fatal, Emma Bannon, Sorceress Prime, appears in his study bringing with her dark whispers concerning threats to his life and the very empire he once served. Someone is killing unregistered mentaths in extraordinarily brutal ways -- a threat not only to Clare's person but to Britannia herself, as the empire's power rests on a delicate balance of sorcery and logic, magic and industry. With a young and vulnerable queen at risk, Clare finds himself the reluctant ally of a sorceress pledged to do whatever it takes to protect her queen -- even if it means unleashing forces as dark as those arrayed against the empire. And so the partnership between Clare and Bannon is born, a wedding of logic and passion, an unlikely union just unorthodox enough that they might just save Britannia -- if mistrust and stubborness don't see one or both of them killed first.

I freely admit that what first attracted me to this novel was its striking cover and typography, all very reminiscent of the promotional materials for the recent Robert Downey Jr. Sherlock Holmes films. And certainly Saintcrow's evocation of Bannon and Clare's world owes much to director Guy Ritchie's colorful vision of Victorian England. But Saintcrow takes Ritchie's energetic filmic sensibility a step further by infusing it with sorcery, mechanical advancements, and a history all her own, a 19th-century Britannia that is at once familiar and refreshingly unique. In Bannon and Clare's world, Britannia is governed by an ancient ruling spirit, currently residing within the vessel of a youthful Queen Victrix, seeking to establish her reign free of her mother's (and mother's advisors) corrupting influence. Familiar places are rechristened (i.e., Thames/Themis, London, Londinium) -- but just when you think Saintcrow is simply making free with new spellings, she surprises and reveals a deeper level of the science, sorcery, and history that makes this world tick.

Clare's intelligence and personal idiosyncrasies are a clear nod to Sherlock Holmes, the prime literary example of reason and logic personified. Like his literary progenitor, Clare even possess a promising arch-nemisis, obliquely referred to as the shadowy Dr. Vance. When coupled with Clare's mysterious past, the promise of Vance waiting in the wings holds tantalizing promise for Clare's further adventures. Pairing such a Holmesian figure with Emma, his polar opposite in passion and expertise, is an inspired touch as watching this 19th-century odd couple strive to find common ground is thoroughly entertaining. Add the peculiar mechanics of Emma's field into the mix -- including a dishy and unflaggingly loyal bodyguard named Mikal -- and the result is a winning (if dangerously combustible) sleuthing team.

The Iron Wyrm Affair is a thoroughly enjoyable slice of steampunk-colored escapism. Saintcrow may paint her world with an easily recognizable -- arguably derivative? -- brush, but she peoples her narrative with a pair of compelling, charismatic leads, colorful supporting characters, and eye-popping action scenes resulting in a highly readable, unfailingly entertaining reading experience. Bannon and Clare each possess a past rife with secrets and drama, promising further revelations and conflict in subsequent volumes as their unorthodox partnership and friendship finds fresh threats in need of the combined force of their particular talents. As a relatively new fan of the steampunk genre, I found much to love here, from Saintcrow's band of misfit heroes to the cinematic flair she possesses when penning scenes of high action. Those searching for a novel laced with a spirit of sheer, entertaining adventure and escapism need look no further than here -- and I for one am looking forward to Bannon and Clare's next case in service to Britannia's Queen Victrix.

Emma Bannon, forensic sorceress in the service of the Empire, has a mission: to protect Archibald Clare, a failed, unregistered mentath. His skills of deduction are legendary, and her own sorcery is not inconsiderable. It doesn't help much that they barely tolerate each other, or that Bannon's Shield, Mikal, might just be a traitor himself. Or that the conspiracy killing registered mentaths and sorcerers alike will just as likely kill them as seduce them into treachery toward their Queen.

In an alternate London where illogical magic has turned the Industrial Revolution on its head, Bannon and Clare now face hostility, treason, cannon fire, black sorcery, and the problem of reliably finding hansom cabs.

This book is waiting for me at the library -- picking it up tomorrow!

Have you read The Affinity Bridge by George Mann? I picked that up on a whim from Amazon Vine and loved it. It's Steampunk and fun. (I need to re-read it and do a review!)

I haven't heard of Mann's books but they look fun! I added The Affinity Bridge to my wishlist. :)

I've been so curious about this one. So glad you liked it! I'm also really glad that it's just a fun as the blurb makes it sound. Thanks Ruth! :)

@Kara - You're welcome! I really enjoyed this one -- lots of fun and high adventure. Good times. :)

Thanks for sharing this review, Ruth! As always, it's helpful. I may pick up a copy of this. Someday. :)

Love what you said about the cover - those were my thoughts exactly.