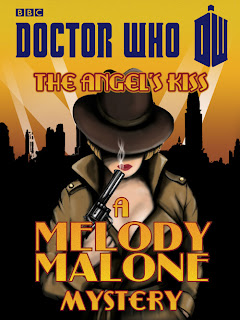 "The Angels Take Manhattan" -- the fifth episode from the current (seventh) season of Doctor Who -- saw longtime companions Amy and Rory bid a poignant and moving farewell to the Eleventh Doctor. Fittingly their final adventure involved one of the Doctor's most fearsome foes (in my view at any rate) -- the Weeping Angels. Only Stephen Moffat could take statuary associated with memorials and faith and give it such a deliciously sinister undertone.

Within the episode, the Doctor reads a pulp detective novel featuring hard-boiled private eye Melody Malone, a character remarkably similar in tone and style to River Song, who is later revealed to be the author. Cue the obligatory multimedia crossover, penned by frequent Who novelist Justin Richards. Richards has a good track record when it comes to capturing the voice of the Doctor in print, and he makes the transition to River-as-narrator with equal aplomb.

I have a bit of a love/hate relationship with River Song -- a little goes a long way in my book. To Richards's credit he does a good job bringing River to life in the 1930s, as her sass and temperament lend themselves to the female version of Sam Spade -- all hard-boiled dialogue and sarcasm. I have a special affinity for the '30s and classic Hollywood, and Richards's incorporation of the Weeping Angels into the studio star-making "machine" is inspired, a storyline I'd love to see explored in a Doctor-centric episode.

While I am admittedly not the best audience for a River Song novella, as I quickly lose patience with her character, Richards delivers a competently-executed supplement to one of the best Eleventh Doctor episodes to date. As a quick read this solid if unspectacular story suffices as an episode tie-in but falls short as it lacks the afterword promised within the episode's script. That aside, it's always fun to see the Doctor or his companions inhabit new worlds and time periods, and personally I hope that one day we get to see the Doctor inhabit the world Melody Malone's adventure introduces to him -- one filled with shadows, hard-boiled detectives, and glamorous femme fatales.

On some days, New York is one of the most beautiful places on Earth.

This was one of the other days…

Melody Malone, owner and sole employee of the Angel Detective Agency, has an unexpected caller. It’s movie star Rock Railton, and he thinks someone is out to kill him. When he mentions the ‘kiss of the Angel’, she takes the case. Angels are Melody’s business…

At the press party for Railton’s latest movie, studio owner Max Kliener invites Melody to the film set of their next blockbuster. He’s obviously spotted her potential, and Melody is flattered when Kliener asks her to become a star. But the cost of fame, she’ll soon discover, is greater than anyone could possibly imagine.

Will Melody be able to escape Kliener’s dastardly plan – before the Angels take Manhattan?
Posted by Unknown at 5:29 PM

So glad I'm not the only one that doesn't adore River. :) On top of her character being meh to me, there's the issue that she married the Doctor and Rose didn't. I knowwww all the variables why she could and blah blah, but still. Haven't gotten over that yet. :D

@Alexandra - Oh you have no idea how glad I am that you commented. :) River just WORE ME OUT in seasons five and six, especially. Seven -- she redeemed herself a bit since there was less of her. Less is more IMO. :)

I was hoping that they'd put this out as a novel. River Song is one of my favorite characters. I can't wait for the day that she meets Captain Jack. Can you just see the sparks and innendos fly?! I love what Moffat has done with the whole meeting out of order thing because she can pop in and out of the show in any episdode.

@Holly - Since River is a favorite you will enjoy this I think! :)

@Tasha - Whoops, forgot to respond to your comment - the concept is a lot of fun, one I would love to see explored further! :)