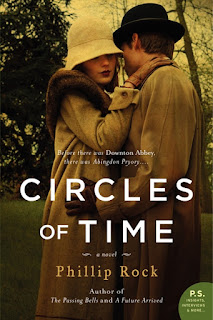 While the "war to end all wars" came to its official conclusion in 1919 with the signing of the Treaty of Versailles, two years later the effect of that devastating conflict is still to be found rippling through the lives of the survivors. American Martin Rilke, who gained worldwide acclaim for his dispatches from the frontlines, returns to London to work as a news bureau chief -- but leaves a piece of his heart buried forever in a Flanders grave. His Greville cousins have their own wartime scars -- Alexandra has returned to Abingdon, bringing with her a young son, the only remnant of a passionate love affair and all-too-brief marriage, cut short by her husband's untimely death. Her long-time affair with the tortured Irish doctor -- and their barely legitimized child -- have left her parents, particularly the earl, scandalized by the changing moral values of post-war society. Meanwhile her brother Charles, the heir, shell-shocked and amnesiac, is a painful reminder of what the war robbed from the Greville family -- a past some would rather see stay buried than risk the heartbreak of unfulfilled hope. And family friend Fenton faces painful repercussions from the army for his role in refusing to bury the truth of Charles's tragic breakdown -- an honorable act that may cost him his family, if not his very life.

Each member of this family, tied to Abingdon Pryory by right of birth or friendship, must grapple with not only the impact of the war on their lives but also the rapidly changing social and political more of society that have blossomed in its aftermath. For traditionalists such as Anthony, the Greville family patriarch, the loosening of morals signals the beginning of the end for a long-held and dearly cherished way of life. Faced with change demanded by the war's indelible impact on each of his children's lives, Anthony and his wife must decide if they can accept the new in order to maintain the dearest tradition of all -- familial bonds. Charles's restoration and slow recovery is a stunningly poignant example of the "unseen" costs of conflict (and, in many respects, mental illness in general -- a medical field whose treatment and research expanded as a necessary by-product of the war), as the horror of war left him a prisoner of shell shock and memory. The family's initial reluctance to address and come to terms with his condition, followed by their tentative steps in accepting, treating, and seeking to reincorporate him into their lives rather than denying his survival is a moving portrayal of reconciliation, hope, and healing in extraordinarily difficult circumstances.

While Martin remains by far my favorite character in this sprawling family epic (more on him in a moment), Alexandra's storyline was perhaps this volume's greatest surprise. Transformed by the war from a flighty, superficial society miss into a somber nurse and long-time married man's lover, by the traditional standards of her aristocratic origins she is "spoiled goods." But the war and its aftermath added great depth and compassion to her character, and the way in which this dedicated mother and mourning widow finds a second chance from a most unexpected quarter made my heart soar. And this is the beauty of Rock's carefully crafted characters -- while, from a conservative, traditional viewpoint, many of their choices are, at the very least, questionable, they are always very honest to the individual and his or her circumstances. Each individual that makes up this world is gloriously, beautifully, messy, flawed, and authentic. I love these characters -- not only for Rock's sterling sense of time and place and authenticity, but because they are each so fully realized. I can't help but celebrate their triumphs and mourn with them in their pain -- vibrant, flesh-and-blood characters all that bring the tumult of the Jazz Age to technicolor life on the page.

As the novel progresses, Martin once again takes center stage as his work as a reporter and passion for bringing the truth to the press gives him a front-row seat to witness the impact of the world's desire to crush Germany for her transgressions -- and in that quest for reparations are sown the seeds of the conflict to come. I have a tremendous passion for World War II history and the interwar years of political, social, and economic unrest that served as a prelude to coming war. Seeing those early seeds of discord find fertile ground through Martin's ever-perceptive eyes, both horrified and powerless to bring the full impact of the brewing anarchist movement in Germany to light -- since it could never happen again, it wasn't more than "they" deserved, it would all "work itself out" -- is a masterful example of the power and potential of historical fiction. Rock is one of those rare historical authors with the power to shock with their work. By restoring the vibrancy and life to a time and place, the birth of National Socialism and the rise of Hitler becomes more than just dates and times. Through Martin's eyes the chilling implications of Hitler's Beer Hall Putsch, the socio-economic realities that fostered his rise and the embrace of his rhetoric possible come to life, resulting in one of the rare instances where a fictional recreation of history fostered within an electric, visceral response. That sense of living history once again, of witnessing the world, in its desperation to recover from one war sow the seeds for a second, is an extraordinary experience.

Starting Circles of Time I was nervous, sure that there was no way it could live up to just how much I loved its predecessor -- but I couldn't have been more wrong. With his second outing exploring the intricacies of the lives of the Grevilles and their circle, Rock has delivered a sequel that is the equal, and perhaps in some respects, arguably the better, of its forerunner. Within the greater framework of a society, a world, left reeling by a devastating war, Rock explores through characters like Martin, Alexandra, and Charles, the thousand little ways in which their world -- indeed, their very identities -- were torn down by the conflict, leaving them to face a brave new world in which to remake themselves and their hope of a future if not free from war's shadow, than one not wholly dictated by the horrific effects of that conflict. In many respects this is an incredibly life-affirming novel, as each of the characters that I've grown to love over the course of two novels discovers their true mettle. It speaks to the powerful resiliency of the human spirit, as Martin, having just met the evil of National Socialism first-hand, can still speak to hope -- "Oh God...let the  marching always be to glad song -- to tidings of comfort and joy." And like our fictional counterparts, no matter how dark the day, may we never lose sight of the promise of a coming dawn.

A generation has been lost on the Western Front. The dead have been buried, a harsh peace forged, and the howl of shells replaced by the wail of saxophones as the Jazz Age begins. But ghosts linger -- that long-ago golden summer of 1914 tugging at the memory of Martin Rilke and his British cousins, the Grevilles.

From the countess to the chauffeur, the inhabitants of Abingdon Pryory seek to forget the past and adjust their lives to a new era in which old values, social codes, and sexual mores have been irretrievably swept away. Martin Rilke throws himself into reporting, discovering unsettling political currents, as Fenton Wood-Lacy faces exile in faraway army outposts. Back at Abingdon, Charles Greville shows signs of recovery from shell shock and Alexandra is caught up in an unlikely romance. Circles of Time captures the age as these strongly drawn characters experience it, unfolding against England's most gracious manor house, the steamy nightclubs of London's Soho, and the despair of Germany caught in the nightmare of anarchy and inflation. Lives are renewed, new loves found, and a future of peace and happiness is glimpsed -- for the moment.

My heartfelt thanks to TLC Book Tours for the review opportunity!

Excellent! I have the first two books on my shelf to read soon.

Wow, what a thoughtful and thorough review! I'm ready to get the book for myself now.

I missed this book tour and I'm so bummed. It sounds so good. I need to find copies.
2 Kids and Tired Books

@Holly - Oh bummer, sorry you missed this tour! Hope you can get a chance to read these asap!

This cover is absolutely STUNNING!

I've GOT to get to these books! Alexandra's storyline is one I know I would love. Also, the fact that you enjoyed the second book as much as the first speaks volumes to me! There's only one series I can think of off the top of my head that I can say that about!

@Rissi - I think this is my favorite out of the covers for the reissued trilogy! :)

@trish - I can never thank you enough for inviting me to participate in this tour -- these books are absolute GEMS!

This is a truly beautifully written review!

@Shirley - Thank you! I just adored this book (and the series as a whole). :)