Review: A Cast of Stones by Patrick W. Carr 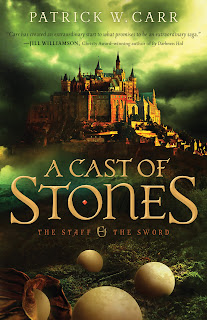 Barely on the cusp of adulthood, orphan Errol Stone has been lost to the ale barrel for years, seeking to drown the memories of horrific tragedy coupled with unspoken grief over his loss of a family to whom he could belong. When a church messenger arrives in Errol's backwater village of Callowford with an urgent summons to the capital for the unassuming local hermit priest, Errol volunteers to deliver the missive, as the promised coin in return for completing his mission could keep him in drink for a week. However, en route to the priest's cottage, Errol is attacked and barely escapes with his life. Now just as much a target as the recipient of the summons, Errol is forced to leave the only home he's ever known and embark on a journey with the priest Martin, his associate Luis, and a pair of warriors from the village in a desperate attempt to safeguard the future of their kingdom from those who would see it destroyed.

Like Errol, his homeland stands on the brink of profound change. King Rodran, the last of his line, has no heir, and so the church leaders and their readers stand ready to select the next king to lead Illustra into a new age. But enemies of the church and king are killing the church's readers, those with the gift of casting lots and reading the answers they seek within the wood or stone, seeking to blind the land's leaders and destroy the fragile barrier that has protected the kingdom for years from the intrusion of corruption and anarchy. When Errol's latent gift as a reader is discovered, the erstwhile alcoholic nobody finds himself one of the most wanted men in the kingdom, facing forces that will stop at nothing to prevent him from fulfilling the call on his life demanding the sacrifice of service to Deas (God) and king. A sacrifice this unlikeliest of heroes must decide if he's willing -- and able -- to give when the cost demanded is his very life.

Faith-driven speculative fiction has traditionally been a tough sell in the inspirational market, classics set in Middle-earth and Narnia seemingly making little room for visions of new worlds in mainstream sales channels. Ten-plus years ago I devoured the attempts of faith-driven publishers to expand this genre, when authors such as Kathy Tyers and her Firebird trilogy and Karen Hancock's ambitious quartet Legends of the Guardian-King. Following those releases, the larger part of the market seemed to step back from fantasy fiction -- so I couldn't be more thrilled that the genre is poised for growth with the release of Carr's debut.

Carr's introduction to Errol and his world is a rich, meaty debut sure to find a home on the shelves of fans who hold the like of Tolkien near and dear to their hearts. A Cast of Stones marries the traditional fantasy tropes of exotic worlds and terrifying dangers with a compelling hero-in-the-making and a subtle, deftly-woven thread of faith. Errol's story is one of the best, freshest realizations of the monomyth, Joseph Campbell's term for the universality of the heroic journey. Campbell posits that the heroic journey follows a basic universal pattern -- the separation, initiation, and return, wherein the hero is called to leave his familiar life, venture into the unknown where he is tested, and return, empowered with the strength and wisdom to change his world. Errol's transformation from addict to warrior is fantastically realized. Even at his lowest he is a wonderfully relatable individual with an ingrained sense of honor and compassion that makes his character one you can't help cheering for.

The world-building within Carr's debut is superb. Errol is surrounded by a cast of richly-drawn characters, from the honorable to the villainous, and the secrets and threats he must navigate, even from those he calls friends, add welcome layers of tension and suspense to the plot. While the world of Illustra is recognizable as a medieval construct, with its royal hierarchy, village priests, and watchman knight-warriors, Carr adds a rich layer of religious and political history to the narrative. The church, with its role in society and the hierarchy of priests and readers is particularly well-realized -- the concept of stone-casting, and its attendant powerful and dangerous possibilities holds rich promise for future volumes in the series.

A Cast of Stones marks Carr as an author to watch. With his debut he's delivered a rollicking, compelling, old-fashioned adventure story wrapped in the trappings of a medieval fantasy. From the first, unexpected threat to Errol's life, Carr sets an electric pace that doesn't let go until the novel's finale pages -- and then, only to leave one hungry for more. With its subtly included faith thread, compelling hero's journey, and multi-layered world-building, Carr has crafted an unforgettable, utterly absorbing story whose imaginative impact will stay with readers long after the final pages. This is a story worth losing yourself in, with a hero you can't help but love. Very well-done -- I cannot WAIT for the sequel!

In the backwater village of Callowford, roustabout Errol Stone is enlisted by a church messenger arriving with urgent missives for the hermit priest in the hills. Eager for coin, Errol agrees to what he thinks will be an easy task, but soon finds himself hunted by deadly assassins. Forced to flee with the priest and a small band of travelers, Errol soon learns he's joined a quest that could change the fate of his kingdom.

Protected for millennia by the heirs of the first king, the kingdom's dynasty nears its end and the selection of the new king begins -- but in secret and shadow. As danger mounts, Errol must leave behind the stains and griefs of the past, learn to fight, and discover who is hunting him and his companions and how far they will go to stop the reading of the stones.
Posted by Unknown at 4:27 PM

I haven't read fantasy in a long time, but now I'm tempted. I met Patrick once several years ago (same trip I met you!) and have been hoping his books would be contracted. This is such good news.

Sounds like a great read! And I love the cover. :)

@Lori - I think you'd really like this one, my friend! I haven't met Patrick, but I hope to do so at some point in the future as I'd love to have him sign my book! :)

i cannot wait to read this!!!!