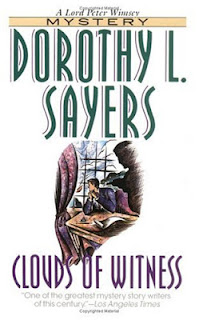 Lord Peter Wimsey, amateur sleuth, is leisurely wending his way back home to London from a much-needed vacation abroad when his indefatigable valet, Bunter, stumbles upon some astonishing news in the Paris papers. Gerald, Peter's elder brother and the oh-so-proper Duke of Denver, has been arrested on suspicion of murdering their sister Mary's husband-to-be. Of course the idea of Gerald murdering anybody is completely ridiculous, but Wimsey cannot resist the siren song of a promising case and the chance to put his flair for investigative work to use on behalf of the very brother who has in past bemoaned his sibling's unfortunate involvement in police work. Faced with the hangman's noose, Gerald refuses to provide himself with an alibi, and his case is remanded to the House of Lords for what promises to be the trial of the decade. With a brother who seems determined to hang and a sister who proves to be uncommonly un-helpful, Peter dives with relish into the conflicting reports that make up the account of the fateful night that Mary's fiance met his untimely end, determined to save his family from ruin in spite of themselves.

I love classic mysteries which spotlight quirky, memorable protagonists, and with the cultured, devilishly smart Wimsey, Sayers has crafted an amateur sleuth sure to delight the heart of any Anglophile. Clouds of Witness is only the second full-length novel to feature Wimsey (following 1923's Whose Body?), and when compared to its predecessor it is a more polished offering, playing to Sayers's greatest strength -- Wimsey's intelligent, sarcastic charm. I love this novel's increased focus on Wimsey vis-a-vis his family relationships. Clearly aware of his various family members' respective affinity for the ridiculous, Wimsey is keenly aware of their short-comings but fiercely loyal -- and seeing Wimsey dance between his roles as brother, son, and friend test the sleuth's perspective and focus, adding tension to the narrative and layers to a character who at first blush could be mistaken for little more than a society fop.

As Wimsey's second full-length outing, the plotting is more polished than his debut. The focus on his family dynamic adds a welcome personal focus to the narrative, raising the personal stakes for Peter since it it isn't just pride of accomplishment at stake, but his brother's very life. Where, however, this novel loses points is the narrative's reliance on transcripts of police interrogations or trials. The lengthy passages and chapters devoted to prose of this ilk bring the narrative to a screeching halt, slowing the investigation's momentum. Sayers's dense, packed prose is as always a delight, but her sidetracks into sarcastic, social commentary fall flat unless filtered through Wimsey's incisive point-of-view -- and in this case, he is almost wholly absent from such chapters.

Despite the novel's occasionally uneven tone, Sayers's sleuth and his circle of acquaintance are, as always, an absolute delight. Between the ever-loyal Bunter, whose friendship and service to Peter began in the trenches of World War I France, to the loyal, easily exasperated Detective Parker, loathe to admit that he's begun to develop feelings for his best friend's sister, Wimsey's closest compatriots are as skillfully rendered as the shining star at the center of Sayers's work. While not Sayers's best work, Clouds of Witness is a solid example of a masterful writer honing her craft, providing a critical chapter in the development of one of literature's most enduring and memorable sleuths.

Rustic old Riddlesdale Lodge was a Wimsey family retreat filled with country pleasures and the thrill of the hunt -- until the game turned up human and quite dead. He lay among the chrysanthemums, wore slippers and a dinner jacket, and was Lord Peter's brother-in-law-to-be. His accused murderer was Wimsey's own brother, and if murder set all in the family wasn't enough to boggle the unflappable Lord Wimsey, perhaps a few twists of fate would be -- a mysterious vanishing midnight letter from Egypt...a grieving fiancee with suitcase in hand...and a bullet destined for one very special Wimsey.
Posted by Unknown at 7:23 PM

Yayyyyyyyy, Lord Peter Wimsey!!!! Loooooove these so much. :) Although I agree, Clouds of Witness was not the strongest novel in the bunch (I prefer any of the novels that Harriet Vane is in...love the banter and sexual tension between the two of them, particularly in Have His Carcase).

@Alexandra - Why am I not surprised that you too love Wimsey? ;)