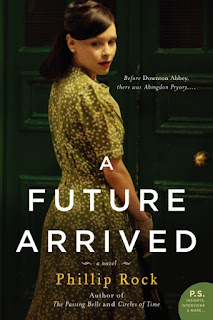 A decade has past since "the war to end all wars," and those impacted by that conflict's stunning, tragic losses fervently pray never again. But as time passes one adage seems determined to prove true -- the more things change, the more things stay the same -- and the Greville family and friends so tested by the conflict that spilled a generation's blood in the trenches stands in danger of seeing the lives of their children imperiled by a new, graver threat. Yet if there are always examples of the worst humankind has to offer willing to test the mettle of the world's resolve, so to are there those whose lives and faith in the potential goodness of humanity who resolve to shine all the more brightly against the threat of overwhelming darkness. In many respects, this final volume in Phillip Rock's Greville trilogy is not only about the final twilight of the Edwardian era, an examination of a world and class system shattered by the first world war,  but how one generation's trials and choices shape the lives of those who follow in their footsteps.

A Future Arrived opens with a symbolic passing of the guard, as long-time Greville family butler Coatsworth passes away, his death a stark, shocking reminder to the earl of his own mortality and the fragility of the legacy he desires to leave his children. But the war and the ensuing tumult of the 1920s, with its dissolution of social barriers once held sacrosanct and its rapidly changing moral values calls into question the very nature of a legacy and the inheritance, intentional or not, that is imparted to subsequent generations. One of my favorite story arcs in this installment involves Charles, the heir and one-time severely shell-shocked victim of the Great War. Charles has found passion and purpose in working with a school that caters to students who, for various reasons (i.e. bullying, as in the case of young Derek), are ill-suited to the rigors of a  traditional British boarding school system. Seeing someone once so broken by conflict, shepherding lives "the system" failed is incredibly heartening -- but also poignant, as the generation that comes of age during Charles's early tenure as headmaster are destined to be tested by the fires of an equally consuming conflict. Charles's accompanying love story is so perfectly realized, so well-meted out on the page as it speaks to not only the fulfillment of a long-cherished dream, but also the fruition of and fulfillment found within a new norm that recognizes that Charles is not -- nor should he be -- an heir fashioned from his father's mold.

Reporter Martin Rilke has been a favorite of mine throughout this series, with his warmth, humanity, and prescient ability to see world events unfold with a clarity and understanding most of his peers lack through either blindness or willful ignorance. Here, Martin becomes the mentor of his wife's brother Albert, the latter determined to follow his brother-in-law's career trajectory to journalistic renown. It's not only a pleasure to watch Martin mentor the next generation, but Albert is a fascinating, compelling character in his own right, who shares his mentor's ability to see world events with startling lucidity -- a gift and a determination to speak the truth regarding Hitler and the rising menace of Nazism to a world determined to maintain the status quo at all cost. I loved his burgeoning romance with the unlikely Wood-Lacy sister, Jennifer, a pacifist reluctant to wed her future to a man whose job requires his all -- much like her own father's undying passion to remake the British army into a viable 20th century fighting force, a viewpoint that, in decades obsessed with disarmament, would exact a stressful toll on her parents' marriage.

And therein lies the genius of this novel, marking it simultaneously as an incredibly moving coming-of-age portrait of the legacy of the post-1919 generationand a tribute to the courage and fortitude of the parents and Great War survivors that saw their world shattered and determined to make it anew. Rock's characters are incredibly flawed and real, genuine, passionate human beings whose hard-fought triumphs and tragic failings alike brought tears to my eyes in turn. While, with the benefit of hindsight, it always seems easy for the present to judge the past for short-sighted failures, if there's one thing Rock proves by transitioning to the younger generation in his conclusion to the Greville saga, it's the constancy of change and the resiliency of the human spirit. Change is hard, life can be overwhelmingly tragic -- but there is always, always hope in the ability of men and women to love, to remake themselves, to adapt, to survive.

As always Rock's ability to craft memorable characters and bring the past to vibrant, colorful life on the page is unparalleled in its power and accuracy. His scholarship is incredible, as is his ability to incorporate history within the novel while never bogging down the narrative with clunky or unnecessary detail. With incredibly fluid, powerful prose and characters so life-like I feel as though they've become dear friends, Rock brings his Greville trilogy to a powerful close with A Future Arrived. While those prone to cynicism might focus on the tragic reality of humankind's propensity for conflict, starkly illustrated just one hundred years ago by two world wars in the span of twenty years, what speaks most powerfully to me is the trilogy's poignant sense of hope in the face of incredible odds, of mankind's resiliency in the face of evil. Circumstances may shape us, but our choices -- how we respond to those circumstances -- that, in the end, is what defines a person and is what makes Rock's characters and his recreation of some of the twentieth century's most turbulent decades so unforgettable.

Putting a period to this trilogy by posting this review is an incredibly bittersweet experience for me. It is a rare treat to discover such a writer and to lose myself so wholly in his world. The Grevilles and their friends and family are characters I'll not soon forget -- quite frankly I'm loathe to leave their world -- and this is a reading experience that, quite honestly, will leave me hard-pressed to equal. Like its predecessors, I will never, ever get over my love for A Future Arrived. Breath-taking in its scope and heart-rending in its emotional power, this is historical fiction at its finest, positively breath-taking in its scope, vision, and raw honesty. Each page in this novel and its predecessors is worth savoring, richly replete with historical detail and achingly authentic characters capable of having you cheering for them at one moment and weeping the next. A Future Arrived is a beautifully-realized conclusion to a heart-pounding, emotionally-charged journey through the tumultuous early decades of the twentieth century. This, my friends, is a reading experience I'll not soon forget and one I'm extraordinarily thankful to have discovered. I will never get over this trilogy -- they've proven to be an exceptional gift, an experience worth savoring long after the final page has been turned.

The final installment of the saga of the Grevilles of Abingdon Pryory begins in the early 1930s, as the dizzy gaiety of the Jazz Age comes to a shattering end. What follows is a decade of change and uncertainty, as the younger generation, born during or just after the "war to end all wars," comes of age.

American writer Martin Rilke has made his journalistic mark, earning worldwide fame for his radio broadcasts, and young Albert Thaxton seeks to follow in his footsteps as a foreign correspondent. Derek Ramsey, born only weeks after his father fell in France, and Colin Ross, a dashing Yankee, leave their schoolboy days behind and enter fighter pilot training as young men. The beautiful Wood-Lacy twins, Jennifer and Victoria, and their passionate younger sister, Kate, strive to forge independent paths, while learning to love -- and to let go.

In their heady youth and bittersweet growth to adulthood, they are the future -- but the shadows that touched the lives of the generation before are destined to reach out to their own.

My heartfelt thanks to TLC Book Tours for the opportunity to review this trilogy -- it has fast become a favorite of mine.
Posted by Unknown at 1:37 PM

This gave me goose bumps! I've been wanting to read the series since reviews of the first book started showing up, but now that people have read the whole trilogy and really really love it I'm especially motivated!

I am so glad that you found this book and that it found you.

In fact, I am so glad that you found the trilogy and it found you. Your writing is just as exquisite, I'm sure, as Rock's. I love booklove! and bookcrushes! and bookpassion and I am thrilled that you found all three :)

@Rachel - Oh me too! I can't wait for you to discover these books...I do so hope you enjoy them even half as much as I did! :)