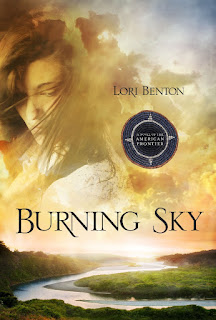 The gorgeous, stunning cover for my dear friend Lori Benton's debut novel, Burning Sky, was just released, and I couldn't resist helping to celebrate by sharing it here. Isn't it beautiful?

The official back cover copy has not yet been released, but here's the story teaser Lori shared on her website:

The 18th century New York frontier bred courage in those who survived its perils.

Willa Obenchain has survived. Returning to her white parents’ abandoned homestead after twelve years of Indian captivity, Willa believes a solitary life is the only way she’ll never lose again what’s twice been torn from her: her family, and her heart.

Even as she begins the backbreaking work of subsistence farming, Willa's land is threatened with confiscation by the new American government, and her determination to isolate herself is threatened from all directions.

There’s botanist Neil MacGregor, wounded and in need of aid....

Two orphans in need of shelter and love....

And the residents of Shiloh, a frontier village still reeling from a bloody revolutionary war, some who welcome her return, others who’ll go to any lengths to see her disappear again.

With each like an arrow poised to pierce her shielded heart, Willa must find a different sort of courage--the courage to lay the past to rest and once more risk embracing the blessings the Almighty wants to bestow.


You can pre-order Burning Sky here. It releases August 6th (which we all know will be here before we know it!). :)
Posted by Unknown at 10:00 AM

Neat! I've seen Lori's comments around here all the time. How exciting.

I love the cover! And it sounds really interesting. :)

@Rissi - Lori and I have been blog friends for ages -- we even got to meet in person a few years ago! I am SO excited about her debut!

@Jennifer - I think Lori got a fantastic cover...I couldn't be happier for her. :)

Thanks everyone! And thank you, Ruth for featuring Kris Orr's awesome cover work. He's captured my character, Willa Obenchain, perfectly. I searched for years for someone I thought looked like Willa, but never found her until WaterBrook dropped this cover in my inbox a few months ago. What a blessing!

@Lori - Oh that is awesome, I love hearing that and am so happy that the cover captures your vision for the character and story. Can't wait until its release! :)