Update 2/21/13: Well it looks like this rumor was too good to be true. Tom Ellis has been cast in ABC's Gothica pilot...so apparently the search for Lady Mary's new boyfriend continues!

My write-up of the season three Downton Abbey finale is coming, I PROMISE! But I couldn't wait to share some early season four casting news!

Read no further if you've yet to see the season three finale and have (somehow) managed to avoid spoilers!

This is your LAST CHANCE!! 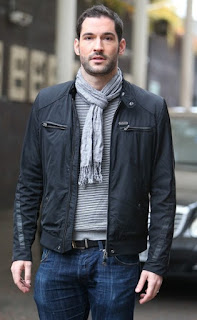 Tom Ellis has been cast as new eye candy for the show! I'm pretty happy about this as I'm familiar with some of Ellis's work (ShakespeaRe-Told and Merlin). It'll be nice to see a somewhat familiar face join the cast!

And seriously, if you can, save your finale comments for the upcoming post! :)
Posted by Unknown at 4:14 PM

Unlike most fans who claim they won't be back for S4, I am REALLY curious about how all this will play out, Ruth. (Thanks for reminding me of this news!) Looks wise, he will fit right in and it should be interesting to see Mary and he interact. Hope he "gels" with the cast so we get more than just one episode.

@Rissi - This seems like big casting news, so I'm guessing it will be for most if not all of season four (I hope so anyway). I've liked Ellis in the past so I'm pretty happy for the chance to see him in a 20th century-set period drama.

*WEEP* I don't WANT a new love interest for May. *throws tantrum*
Much as it will be very bittersweet, I'm curious to see how season 4 pans out...but oh GOSH. Already things like this are being leaked?! NO!
I'll go console myself with something I at least have control over--my novel! ;)

I'm glad to see that Lady Mary might find herself with another hottie on her hands ;) I've been worried about her, scared that she might disappear into a stony interior and never let anyone else again.
Maybe he'll be a brooding Mr. Darcy type and buy that house off of Sir Richard down the lane? :D

@Heather - Heck YES to everything you just said. :)

Ha! I agree totally with Heather! I'm sad about Matthew, but I rather like what little I've seen of Mr. Ellis in youtube clips of Miranda. Plus he's pretty cute! Always a good thing in my book. (Why yes, I am shallow. Thank you.) ;D

He was Tom Milligan in the Doctor Who episode, "Last of the Timelords". I like him. Season 4 will be very interesting.

@Holly - That too! Thanks for mentioning that role. :)

I've seen this is not a rumor that isn't true. It was a statement by Masterpiece's publicist. *sniff* Just got all excited about it. Wonder if that is the case or if they're just trying to keep the story under wraps? ;)

@Rissi - Yeah, I saw that Ellis has been cast in a Gothica pilot (I updated this post). Well the search continues! :)

@Traxy - Sad he won't be on Downton, but I'm looking forward to the Gothica pilot.