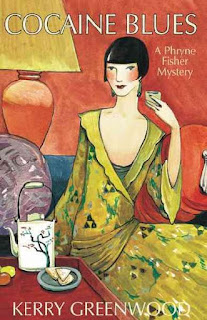 A few weeks ago I stumbled upon the news of an upcoming period mystery release -- Miss Fisher's Murder Mysteries, based on the long-running series of novels by Australian writer Kerry Greenwood. Biding my time until the first season's US release, and intrigued by the 1920s Melbourne setting, I opted to explore the first volume in the series (now numbering nineteen). The distant -- and considerably poorer -- relation of a prominent British family, Phryne's family was elevated from their impoverished state when several heirs were killed in the Great War, leaving Phryne's father the heir apparent. While Phryne has enjoyed the accouterments attendant with great wealth, she's grown tired of life in England -- and when the opportunity arises to investigate the state of a troubled marriage in Melbourne on behalf of a friend, she jumps at the chance to return to her homeland reborn as a lady with power and connections.

Phryne is perhaps best described as lightning in human form, raw energy that relishes in living life to its explosive, fullest potential. I like her passion and enthusiasm for everything from aviation to disguises, her refusal to conform to the societal norm and its expectations of the "proper" role for women. However, this is the roaring twenties with its rapidly changing moral values, and a determination to flout convention can all too easily veer into tastelessness -- and it is this curious dichotomy at the core of Phryne's character that I find most troublesome. She has an admirable heart to assist those less fortunate than her, remembering from whence she came, but her penchant for quick hook-ups and activities of that ilk cheapen an otherwise promising and independently-minded, unique heroine.

By contrast I really liked Greenwood's cast of supporting players. There's Bert and Cec, best friends and partners in a cab driving venture, who fall into Phryne's circle when the rescue the victim of a botched abortion and Phryne needs their help capturing the perpetrator. And then there is Dot, who loses her position  when she refuses the advances of her employer's lecherous son. Faced with selling herself in order to survive, Phryne earns her undying gratitude when she gives Dot's would-be destroyer his comeuppance and offers her the position of ladies maid. Unfortunately for Phryne, those surrounding her are often more skillfully drawn than the series' central character. But as this is only the first installment in the series, the pieces are in place to hopefully provide Phryne with a more compelling, full-realized backstory and a believable compulsion for her venture into the atypical world of sleuthing.

While Cocaine Blues didn't quite deliver the characters or sense of time and place that I look for in a period cozy mystery (i.e., Agatha Christie being a prime example), it was a fairly diverting if not altogether memorable way in which to spend a few hours. Greenwood isn't afraid to tackle darker, more controversial subject matter than found in most novels of this ilk, and the energy she brings to her first Phryne mystery holds promise for future installments.

The London season is in full fling at the end of the 1920s, but the Honorable Phryne Fisher—she of the gray-green eyes and diamant garters—is tiring of polite conversations with retired colonels and dances with weak-chinned men. When the opportunity presents itself, Phryne decides it might be amusing to try her hand at becoming a lady detective in Australia.

Thank you for reviewing Phryny Fisher, I did not think anyone had heard of her although I had to wait months to get to the top of the waiting list for the first book in the series at my library because I could not find it for sale anywhere.

It came in a 3 story volume and I am about to start the third story and loving them.

I watched the series in Australia and love it, it is being repeated at the moment and I am still loving it so I hope it does well overseas so we can have another series.

@Alexaril - I'm thrilled to meet another fan, and to have stumbled upon this character. I'm also thrilled to hear good things about the television series -- I'm anxious to check it out!