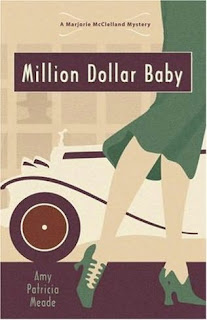 Successful young mystery writer Marjorie McClelland leads a solitary, comfortable life in the quiet post-Prohibition town of Ridgebury, Connecticut – that is, until Creighton Ashcroft, a British heir with time and money to burn, purchase a deserted mansion on the outskirts of town. Creighton craftily arranges an intimate meeting with Marjorie, but his romantic hopes are dashed when the two of them stumble across a body while strolling through the garden of his new estate. To complicate matters further, the handsome detective assigned to the case catches Marjorie’s attention – and Creighton’s suspicious eye. Determined to solve the mystery of the mansion’s sordid past, the unique sleuthing trio soon find themselves caught up in a web of treachery, betrayal, and murder.

Marjorie McClelland lives a quiet life in Ridgebury, a small town – think Jessica Fletcher’s hometown from Murder, She Wrote – where nothing exciting has happened in years. As a fairly successful mystery novelist, Marjorie’s profession and independent streak often put her at odds with some of Ridgebury’s more traditional residents. Under pressure to finish her latest book, Marjorie is thrilled with the arrival of a true novelty – the wealthy and worldly Creighton Ashcroft, a British heir with money and time to burn, both unusual attributes in the middle of the Great Depression. Creighton is immediately smitten with Marjorie, but when the two of them discover a body on the grounds of his newly-purchased home, she won’t give him the time of day once she meets the handsome investigating detective. Determined to win her, Creighton refuses to give up, and his amateur sleuthing partnership with Marjorie forces them to spend a great deal of time together. But their efforts to unmask a killer whose crimes have been buried for five years brings them closer to danger than either would’ve dared dream, and it’s a race to discover the truth before the killer can turn them into the next victims.

Million Dollar Baby is proof that Amazon is way too familiar with my reading habits and preferences. Meade’s debut novel showed up recently as a “suggestion,” and when I read a review likening Marjorie and Creighton to Dorothy Sayers’s detectives Peter Wimsey and Harriet Vane, I knew I had to give the book a try. The Depression-era setting and a British sleuth named Creighton (love that!) prove to be an irresistible combination. Meade’s characters and storytelling style have an old-fashioned feel that makes it easy to visualize classic Hollywood actors like Katharine Hepburn and Cary Grant, or Myrna Loy and William Powell bringing Marjorie and Creighton to life on the silver screen. The way Marjorie and Creighton constantly needle each other, exchanging quips galore while dancing around the issue of their mutual attraction is the heart and soul of the novel and is very reminiscent of the screwball comedies of the 1930s. I really enjoyed Meade’s gently sarcastic sense of humor, and I absolutely loved watching Marjorie and Creighton’s relationship develop.

The novel is paced fairly well, but it was the characters that kept me turning pages, not the mystery itself. Like Loy and Powell and their Thin Man movies, the Marjorie/Creighton relationship is what makes this book tick. The mystery is serviceable enough, with a few twists and turns that I didn’t necessarily see coming. But what kept me turning pages at a rapid-fire pace was the fun in watching Marjorie and Creighton establish their often prickly, always funny relationship. Million Dollar Baby is a trifle overly long, and there are a couple of spots where some judicious editing could’ve tightened the plot and pacing of the story, but those are relatively minor issues that didn’t detract from my overall enjoyment of the novel. If you’re a fan of Agatha Christie or Sayers, or the tone and pace of classic Hollywood films like The Thin Man, you’re in for a treat with Meade’s debut. Like the escapist filmmaking of the 1930s, Meade does a good job evoking classic Hollywood gloss and balancing that with an acknowledgment of the economic realities of the time. I’m hooked, and if Million Dollar Baby is any indication, Meade’s subsequent McClelland mysteries should hold great promise.
Posted by Unknown at 1:49 PM

This is going on my wish list now! There are so many mystery series that skimp on the characters in favor of dramatic plot twists. I tend to be more forgiving of a weaker mystery with characters that are truly alive and ready to pop off the page than a cracking mystery with characters who are just there to move the plot along, with no real personality or spark.

@Ruth - I really hope you get to read this one, as I'd love to discuss! I picked up used copies of books 2 and 3 in the series, and based on size (haven't started them yet) I have to wonder if the storytelling is going to be a bit "tighter" as they are noticably shorter than this book. Really enjoyed it but it did tend to meander just a bit.

And I COMPLETELY agree with your comment about characters...I can forgive a so-so plot if the characters are unique, quirky, living, breathing creations that are a joy to spend time with. Creighton and Marjorie were such delightful "throwback" characters, which worked really well for me considering I felt like I'd "met" them on Turner Classic Movies or something. *wink* They were a lot of fun, I look forward to seeing where Meade takes them in future books.

I've read your blog for awhile, not certain if I've left a moment before though. Anyway, I just checked out all three books at the library, due to your review. I'm looking forward to reading them.

@Michelle - Hi & thanks so much for commenting! I really hope you enjoy Million Dollar Baby, please let me know what you think! I hope to start book 2 soon...I've been hit HARD by allergies this week, so I'm behind on all my reading.

Agatha Christie and The Thin Man? Sign me up! I must read this. Thanks for the review.

Side note: I adore the cover!

@Juju - I know, I love the retro look of the cover too - the publisher did a great job with the design. :) Enjoy the book!