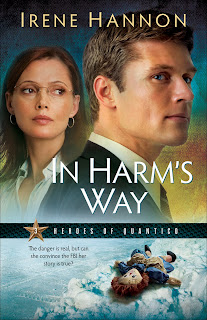 FBI Special Agent Nick Bradley has seen his share of kooks during his fifteen years with the Bureau. But Rachel Sutton is an enigma. She seems normal when she shows up at his office – until she produces a tattered Raggedy Ann doll and tells him about a strange feeling of terror it gives her when she touches it. Nick dismisses her, only to stumble across a link between the doll and an abducted child, setting in motion a chain of events that uncovers startling connections – and puts Rachel’s life on the line.

Filled with palpable suspense and heartwarming romance, In Harm’s Way is the final installment of the thrilling Heroes of Quantico series.

When Rachel Sutton pulls a battered Raggedy Ann doll from a snowdrift, she never expected to be assailed by a feeling of overwhelming terror. Not one to believe in psychics, but unable to ignore the fear that overcomes her every time she touches the doll, Rachel takes a leap of faith and delivers the toy to the local FBI office. At her wit’s end, and even though she’s convinced she’ll be mocked and dismissed as a crazy, Rachel’s sure that entrusting the doll to the FBI will allow her to move on with her life. Nick Bradley, a veteran agent, has met his share of whacky tipsters, but Rachel’s levelheadedness and apparently genuine terror raise enough questions in his mind that he’s unable to simply dispose of the filthy toy and write off Rachel’s reaction as some sort of bizarre coincidence. When the doll turns out to be the only clue in a kidnapping case gone cold, and it’s revealed that Rachel has an unexpected tie to the missing child, suddenly Nick’s intriguing tipster is the target of unwanted media attention. As the news story spreads, Rachel becomes the only threat to a kidnapper desperate to cover her tracks, and Nick must work overtime to protect Rachel, the investigation’s best lead and the only woman who’s ever invaded his heart.

I was so happy to finally read Nick’s story. The glimpses of his character in the first two books of the series marked him as an intriguing guy, and I had great fun watching Hannon turn the tables on him as he enters the spotlight and becomes the hero falling hard for a woman at the center of an investigation. Hannon writes the male point of view extremely well, and Nick is her best hero yet – a dreamy combination of toughness and sensitivity. The faith element was also well-integrated into the storyline. I loved the fact that Rachel wasn’t a stranger to the idea of God, she just didn’t see the need to cultivate a relationship with Him. Also, it was nice to see a female lead exploring faith – more often than not in CBA fiction it is the hero who learns faith in a story, so I really appreciated how Hannon shook up this formula with this novel. Also, Rachel’s reaction to the doll and how others respond to it added a unique element to the storyline.

Hannon concludes her Heroes of Quantico series with a well-plotted thriller and a spectacular romance, earning In Harm’s Way the top spot in my favorites ranking of the trilogy. Every aspect of this story clicked, working together on all levels from pacing, plotting and characterization to deliver one engaging, un-put-downable read. While I couldn’t help but favorably compare the first two Quantico books to Dee Henderson’s O’Malley series, which has long been a “gold standard” in romantic suspense in my view, this book blew past the competition. Hannon is clearly on track to lay claim to the title of “Queen of Romantic Suspense” in the CBA market. In Harm’s Way is the perfect blend of suspense, balanced with just the right touch of romance between two leads that have so much chemistry the sparks practically fly from the page. Masterfully plotted and crackling with romantic tension, In Harm’s Way delivers the goods – I can not WAIT for Hannon’s next book!
Posted by Unknown at 3:46 PM

Wow, Ruth! THANK YOU for the wonderful review of my book. I'm thrilled you enjoyed it, and very, very flattered by your kind words. Please do watch for my next book, Fatal Judgment, Book 1 in my new Guardians of Justice series. It will be out in January.
Again...thank you so much. Your review made my day! Irene Hannon

@16shamrock - Irene, wow, thank you so much for stopping by my blog and for your kind feedback!! I cannot WAIT to hear more about your new series, thanks for giving me the heads up on the title! :)

@Sara - Hi & thanks for stopping by the blog! Hope you get to read this one soon, I just loved it.