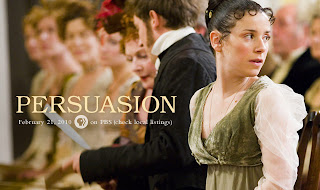 Let's see, Masterpiece Classic aired the encore of this version of Persuasion back in February, and I'm just now getting around to acknowledging it on the blog. Oh well, such is life...better late than never is apparently the new norm around here. ;-) This program originally aired on PBS in January 2008 as part of the Jane Austen season that year. I originally blogged about this show here - this is a re-post with maybe a few new thoughts thrown in for good measure. Here's the summary of the show from the PBS website:

"The one claim I shall make for my own sex is that we love longest, when all hope is gone." ~ Anne Elliot in Persuasion
Unhappily unmarried at age 27, and dealing with family financial peril, hope is fading from Anne Elliot's (Sally Hawkins, Little Britain) life. Circumstances bring Captain Frederick Wentworth (Rupert Penry-Jones, Casanova), a dashing naval officer she once deeply loved, back into her life eight years after Anne was persuaded by her family to reject his marriage proposal. Having returned from sea with a new fortune, Wentworth is surrounded by swooning women while Anne broods at the periphery, longing to be in Wentworth's favor. Now Anne comes face-to-face with the deep regret of her old decision, and her abiding love for Wentworth, as she wonders if a long ago love can be rekindled.

Upon first viewing, the verdict was that I absolutely loved it. This adaptation isn’t without…how can I say it?...it’s quirks, but I really, really enjoyed it. And I’m completely in love with Rupert Penry-Jones as Captain Wentworth (never saw that one coming, did you? LOL!).
The score, by Martin Phipps, was exquisite. He also scored North & South (it’s CRIMINAL that this man’s work isn’t available on CD). I also loved the sets, costumes, and cinematography…the latter for the most part, anyway. I read somewhere that some, if not all, of Persuasion was shot with hand-held cameras, and the herky-jerky movements are glaringly apparent, especially in the film’s first ten minutes. The whole hand-held camera technique worked really well for Bleak House as it helped up the story’s suspense level – but for a romantic period drama like Persuasion the “immediacy” such camera work provided wasn’t really required IMO, and could be a tad distracting.

Overall, I really liked Sally Hawkins as Anne Elliot. However I don’t think the cinematography did her performance any great service with the randomly inserted close-ups of her face where she said absolutely nothing for several seconds at a time. I kept expecting her to start addressing the audience like Frances O’Connor’s Fanny Price does in the 1999 version of Mansfield Park (which worked REALLY well in that film, I think). Also, the way they had Anne run hither and thither all over Bath at the end of the film was a little funny. Okay…after watching this version, say another ten times, I might find it hysterically, laugh-out-loud funny…but last night I admit to being totally caught up in Anne’s romantic angst, so I just didn’t care. LOL!

Rupert Penry-Jones as Captain Frederick Wentworth – definitely the highlight of the show. Or, as I told a coworker as we texted back and forth about this movie late last night, “I WANT MY OWN FREDERICK NOW, DANG IT!” (that’s a direct quote, in case you were wondering). Oddly enough, when the camera just paused on Wentworth’s face and he gave a look, I didn’t mind at all (haha). And the very end was just perfect…I could’ve cried (in a completely good way). (Spoiler alert, in case you care…) When Wentworth surprises Anne with a new house for a wedding gift, the look on his face as he watches her joy is just priceless. And then they dance in the yard…oh. My. WORD. Loved it. I realize I’m a complete and utterly hopeless romantic sap, but I don’t care. It was too perfect! 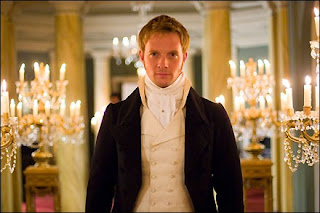 Gah...I just love Rupert Penry-Jones. I think his acting gets unfairly dissed sometimes, just because he's too freakishly beautiful for words. And when he just stares at the camera and emotes - well, I'm not gonna object. Just sayin'. :)
I didn't really talk about Anne's family when I originally blogged about Persuasion, I think I was too caught up Rupert Penry-Jones' fabulousness. However, since this originally aired Anthony Head, who plays Anne's father, Sir Walter Elliot, has also appeared in the television show Merlin as King Uther. I've got to say, the man plays snooty aristocrats quite well.
I've watched this film several times since it originally aired, and my opinion of it has remained pretty consistent - for me, the camera work is the movie's biggest drawback. But the performances, tone, pacing, and look of the film equal a thoroughly enjoyable experience. Worth checking out if you've yet to see it.
Posted by Unknown at 9:19 PM

Oh, Ruth, THANK YOU for this beautiful post. I just happen to love this adaptation of my favourite Ja's novel as much as you did. I hit it off with this blond Wentworth immediately. Someone complains that he is too handsome. TOO? What does that mean? I simply find RPJ perfect in this role. I tried to watch 1995 BBC version after seeing this one on DVD but ...I still prefer this one with all its quirks (quoting you!)
HAPPY EASTER TIME, RUTH!

Ruth, I may have missed this one. It's in my Netflix queue now. Even if I've seen it before, they always stand up to multiple viewings. But methinks I'd have remembered Rupert!

I totally need to watch this. I feel so bad I haven't yet!

@Maria - Oh, you just made my day. So happy to meet someone else who's as much a fan of this film as I am! :) I just can't get through the other film version...puts me to sleep! Happy Easter to you as well!

@Lori - I think you would've remembered RPJ too. :) Hope you enjoy the movie, and Happy Easter to you as well!

@mrsthorntondarcy - Hope you get to see this soon!

Oh, I forgot Anthony Head was in this one. I also forgot about that one guy... what's his name? Sorry, Ciaran Hinds is going to be Capt. Wentworth forever for me. ;)

I've watched this version a couple of times since receiving the DVD two years ago, trying to be objective. But I still don't like it. I still feel they ripped the heart and soul out of the story by absolutely ruining what should be the most tense, most romantic, part of the story---when Frederick overhears Anne and Captain Harville discussing whether men or women love longest when all hope is gone. The 1995 version remains the best to date, in my very humble opinion.

I stand by my original review of it. But I know we can agree to disagree. Now, if they ever did a version with Richard Armitage or Karl Urban as Frederick, I could probably forgive them just about anything.

@heidenkind - You and Kaye would get along in regards to Persuasion preferences. :)

@Kaye - As you say, regarding this we have to agree to disagree, which is cool. :) Something of the heart and soul of the story comes through for me, still, because I find myself getting really emotional when I watch this movie. Go figure. ;-)

Now oh my word, Richard Armitage or Karl Urban in ANY period drama...but especially of the Austen kind? That would be heavenly. :)

Overall, I really liked Sally Hawkins as Anne Elliot. However I don’t think the cinematography did her performance any great service with the randomly inserted close-ups of her face where she said absolutely nothing for several seconds at a time. I kept expecting her to start addressing the audience like Frances O’Connor’s Fanny Price does in the 1999 version of Mansfield Park (which worked REALLY well in that film, I think).

Sally Hawkins' Anne was addressing the audience. She was expressing her current emotional state with her eyes. Like a silent film actor would do.


After watching both the 1995 and 2007 versions, I must honestly say that I prefer both. Yes, they are different in styles. But the leads for both movies are superb. And . . . unfortunately, both movies were unable to deal with the troublesome William Elliot character. He was a weak link in the novel and in both movies.

@Juanita's Journal - Thanks so much for stopping by the blog, I appreciate the comment! I see where you're coming from regarding Sally Hawkins' Anne and the characters tendency to stare...if that is the affect the filmmakers were going for I don't think it translated as well is could have in the final product (compared to silent films). Glad you enjoyed both versions of the story!