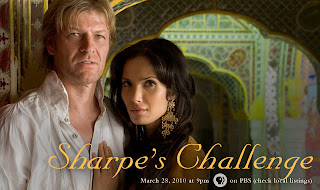 Since the Masterpiece Classic season is about to draw to a close, I really need to catch up on my blogging. *sigh* I'll blame the two Sharpe films - I've never been that excited about the film series to begin with, plus I watched Sharpe's Challenge years ago when it originally premiered on BBC America. However, these films are often fun showcases for favorite and familiar actors, so let's discuss for a bit. Here's the summary of this episode from the PBS website:

War weary and retired, Colonel Richard Sharpe (Sean Bean, The Lord of the Rings) is summoned by the Duke of Wellington to find a missing agent, but he resolutely declines. When he learns the MIA officer is his old friend Sergeant Major Patrick Harper (Daragh O'Malley), fighter and free spirit Sharpe quickly reconsiders, and begins a perilous adventure amidst rebellious forces in British India. Sharpe's seemingly impossible mission: storm an impenetrable fortress, rescue the daughter of a British general and quell the rebellion. With the odds stacked against him, Sharpe confronts shifting allegiances, incompetent leadership within the British troops, the conniving seduction of Madhuvanthi (Padma Lakshmi, Top Chef) and an explosive confrontation with an old foe. Has Sharpe finally found one challenge he won't be able to conquer? Sharpe's Challenge is based on the characters created by novelist Bernard Cornwell.

The Sharpe films have always reminded me of my beloved Hornblower film series starring the even more beloved Ioan Gruffudd in the title role. I've got to say I always preferred the nautical Hornblower films more - Gruffudd trumps Bean (sorry Sean!) and that series quit while it's ahead in my view, while the Sharpe series currently stands at a staggering sixteen films.
I really can't think of an actor better suited to play the rough-and-tumble soldier, honorable, and *of course* a hit with every woman he meets Richard Sharpe than Sean Bean. He's just got the look for it, know what I mean? In this film, he's pulled out of retirement by the Duke of Wellington. This rank-and-file soldier earned an "in" with the illustrious Wellington when he saved the duke's life years earlier. Wellington is played by Hugh Fraser, who is always fun to see. I became a big fan of Fraser after watching him play Captain Hastings opposite David Suchet's Hercule Poirot in the long running mystery series. Sharpe agrees to return to India when he discovers that missing British agent Wellington wants to find is his long-time friend Harper (Daragh O'Malley). Now's as good a time as any to mention the setting, which is one of this movie's strongest points. Colonial India is a setting you don't see a whole lot of in period dramas, and that fact alone makes for a refreshing change of pace. The British attitude toward the native Indian soldiers (and vice-versa) also seems to be pretty realistically and doesn't shy away from the prejudices and racial tensions of the day.
Dodd, the villain of this piece is played by the deliciously yummy Toby Stephens. :) I love it when Stephens plays a romantic hero (as he did so memorably in Jane Eyre), but let's face it, the guy specializes in villains (Prince John in Robin Hood, Gustav Graves in Die Another Day). Stephens has a real knack for making bad appealing, plus he's quite easy on the eyes. Just sayin'. The experience of watching Sean Bean face off against Toby Stephens is enough to make this movie worthwhile on that point alone. *wink*
When this film first aired in 2006, I completely didn't appreciate the fact that it features Lucy Brown as one of the heroines - better known now as Claudia/Jenny in the television show Primeval. I definitely prefer Brown's later role. Here she exists as little more than a romantic option for Sharpe, so there's not much in the script for her to work with.
So that's about it...long time fans of the film series or the novels are sure to enjoy this installment in the series. It's a decent little adventure flick - not great, not bad, I'm just rather ambivalent about the whole series I guess. :) Thoughts?
Posted by Unknown at 3:50 PM

I agree with you--this series is meh. It was okay but it's not something I'm going to make an effort to watch again.

@heidenkind - Yeah, once is enough for me too (though in this case, two viewings separated by four yeras...all for the sake of the blog, haha!!).

My beloved Paul McGann was originally cast as Sharpe and even started filming, but after the second day of shooting, he injured his leg (knee, I think) playing soccer, so they had to recast and chose Sean Bean.

Just think, if Paul hadn't been stupid and gone out to play soccer and been fired from the Sharpe movies, he never would have been cast in the fifth through eighth Hornblower movies, and I might never have created a character named William Ransome!

I don't know if "appealing" is quite the right word for it, but yes! ;) I only watched this one because Toby Stephens was in it, and sadly we don't get to see his character that much. Still - good grief, he does villains well! DAD was atrocious (another movie for the sake of Mr. Stephens - and partially Brosnan) but at least Sharpe's Challenge would've been okay even if TS wasn't in it. Perhaps it wouldn't have been as attractive, but still.

@Kaye - I think you told me about Paul McGann originally being cast as Sharpe but I completely forgot. Honestly it all probably worked out for the best (for his career AND the Ransome Trilogy!). :)

@Traxy - I don't mind Die Another Day, but I can't argue with you it is definitely one of the lesser Bond films. ;) However I find it wildly entertaining, mainly for Brosnan's cheesiness and Toby Stephens as the baddie. :)