Review: The Eyeless by Lance Parkin 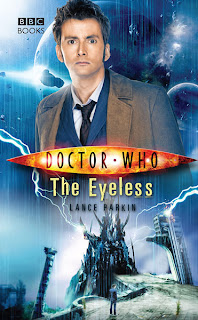 At the heart of the ruined city of Arcopolis is the Fortress. It’s a brutal structure placed here by one of the sides in a devastating intergalactic war that’s long ended. Fifteen years ago, the entire population of the planet was killed in an instant by the weapon housed deep in the heart of the Fortress. Now only the ghosts remain.
The Doctor arrives, and determines to fight his way past the Fortress’s automatic defences and put the weapon beyond use. But he soon discovers he’s not the only person in Arcopolis. What is the true nature of the weapon? Is the planet really haunted? Who are the Eyeless? And what will happen if they get to the weapon before the Doctor?

The Doctor has a fight on his hands. And this time he’s all on his own.

The Eyeless is the first Doctor Who novel I’ve read that features the Doctor in a solo capacity, sans any of his usually ever-present, beloved companions. This lack of a readily available sounding board for the Doctor really changes the tone and dynamic of the story, and it took me a bit longer than normal to really “get into” this novel. But the payoff was worth it. Since the Doctor is traveling alone, there’s no outlet for his manic energy to focus on, no one to listen to his rapid-fire dialogue and brilliant deductions. Parkin has crafted a darker, introspective tale that forces the Doctor to come to terms with not only his “single” state, if you will, but also the painful, buried memory of the fact that he is the last of his race. The tone and pace of The Eyeless is reminiscent of the excellent episode “Midnight” from series four – which, now that I think about it, served as a nice precursor to the direction the Doctor takes after that season finale. For the Doctor, losing friends, or having them simply move on, has reached a point where he *thinks* the pain is greater than the payoff. This book also recalls the later special The Waters of Mars, since both storylines deal with insular groups of people that come to be threatened by an apparently overwhelming and misunderstood outside force. How each group of people in these episodes and this novel deal with the threat presented to them provides a fascinating and chilling look at how tightly focused social dynamics play out under extreme, life-threatening pressure. Though this book had a bit of a slow start, Parkin’s done a solid job exploring the Doctor’s personality and letting the reader catch a glimpse of how his brilliant mind works. This is a worthwhile read for fans of David Tennant’s tenure as the Doctor.
Posted by Unknown at 8:59 PM