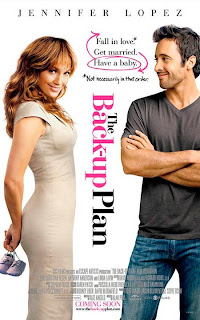 This is going to be a relatively short movie review, since it’s been a week since I went to see The Back-up Plan and just never got around to writing about it. My expectations weren’t too terribly high considering Alex O’Loughlin’s track record. I absolutely love the guy as the vampire detective Mick St. John in the all too short-lived series Moonlight. But then the TV show Three Rivers unceremoniously tanked, and I pray you don’t have friends like I do (here's looking at you, Lori!!!!!) who email you the trailer to movies like Feed (seriously, DO NOT LOOK IT UP UNLESS YOU WANT YOUR RETINAS SCARRED!!). And now apparently he’s in the Hawaii Five-O remake, and seriously isn’t that the one show the world has been waiting to see remade? Seriously. *sigh* But in spite of his rather spotty track record I love the guy and really would like to see his career succeed. I mean look at that movie poster – he’s adorable. And if this film is any indication, from the way he handled the comedy in this movie, O’Loughlin could well be the “new” Matthew McConaughey (think The Wedding Planner or How to Lose a Guy in 10 Days). Here, O'Loughlin gets the chance to prove that he can be really, really funny, and honestly he gets bonus points for successfully pulling off the whole "I'm a farmer/cheese maker" aspect of his role.
Besides being a potential break-out vehicle for O'Loughlin, The Back-up Plan is also a return to form, I think, for Jennifer Lopez. Her romantic comedies are really the only films of hers that I have truly enjoyed, and it’s been ages since she’s appeared in something that was just fun, plain and simple. I can’t remember the last time I’ve seen a movie where I’ve laughed so hard I cried multiple times throughout the film. The movie is just chock-full of outrageous, crazy, laugh-out-loud scenarios. Now, I will say that some people will find some of the humor a bit crass – this is a PG-13 movie so take that rating into consideration if you are a conservative film viewer. Yes, J-Lo and Alex go about the whole get together and make a family thing in a completely backwards way, but that said their fast-track attempt to adjust to the idea of parenthood makes for some comedic gold mixed with a few heart-warming moments, I'm telling you!

As a quick side note, it was great to see Tom Bosley on-screen as the romantic interest for J-Lo’s grandmother, but goodness it was a shock to see him look so old!! I guess it has been a while since his days on Murder, She Wrote, LOL! Anthony Anderson was also hilarious as the playground dad who befriends Alex’s character and imparts his insight into the “joys” of parenting.

I needed to laugh, hard, when I went to see this movie, and it delivered in spades. So, if you've seen The Back-up Plan I'd love to hear what you thought of it! I really hope Alex O'Loughlin gets the opportunity to appear in some more big-screen romantic comedies since he shows a nice comic touch. Plus he's just yummy, just sayin'. :)
Posted by Unknown at 3:28 PM

HA HA! You're welcome! I'm sorry I always feel the need to share the emotional trauma YouTube has inflicted on me with my friends. You are very kind to cap and bold that dire warning about Feed.

@Lori - Ha, yes I felt the warning needed to be shared. Take it seriously, people!!!