Review: Too Close to Home by Lynette Eason 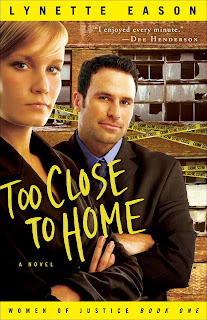 When missing teens begin turning up dead in a small Southern town, the FBI sends in Special Agent Samantha Cash to help crack the case. Her methods are invisible, and she never quits until the case is closed.

Homicide detective Connor Wolfe has his hands full. His relationship with his headstrong daughter is in a tailspin, and the string of unsolved murders has the town demanding answers. Connor is running out of ideas – and time.

Samantha joins Connor in a race against the clock to save the next victim. And the killer starts to get personal.

Too Close to Home ratchets up the suspense with each page even as love blossoms in the face of danger. Read this one with the lights on!

Connor Wolfe is a man consumed by his work as a homicide detective. Catching bad guys is what he was born to do, and it’s a job that’s much easier than trying to repair his fractured relationship with Jenna, the teenage daughter that blames him for her mother’s death four years earlier. In the middle of a high profile investigation seeking a serial offender who is snatching teenage girls that turn up dead several months later, Connor calls in FBI reinforcements. One thing all of the victims have in common is their internet savvy and love of texting, and Samantha Cash is an expert at unraveling the invisible threads of wireless communication. Connor is instantly intrigued by Samantha and admires her intensity and work ethic, but his family baggage and antipathy towards her faith stand in the way of developing a relationship. Just when Connor starts to open up to the idea of faith, the killer’s attacks get personal, and suddenly it’s Samantha and Jenna who are targets. Samantha and Connor find themselves in a race against time to prevent more teenage girls from becoming victims, but can they succeed before the killer removes one of them from the investigation?

Too Close to Home is the first book I’ve read by Eason, and I’m impressed with her ability to deliver a page-turning, realistic plot. Many times suspense novels can be incredibly well-written, but the storyline is just a little too far-fetched to really drive the threat against the characters home. Not so with Connor and Samantha’s story. Missing teens and internet predators fill the news all too often, and with an average town as the novel’s backdrop, Eason delivers a story that’s compelling because the drama has a sadly familiar ring to it. Eason’s strength for careful plotting really shines in this novel. Each event, each threat, each action scene layers on the suspense and will keep you turning pages to find out what happens next. Similar to a television crime show, no scene is wasted, with the added benefit that since the story unfolds in novel form Eason gives the reader more in-depth detail and character development.

Character-wise, I loved reading about Connor’s struggles as a single father, fighting to relate to a rebellious teenage daughter. Occasionally, though, Connor’s voice lacked the strong, masculine presence I look for when reading romantic suspense – some other recent reads have a bit of a better handle on the male point of view IMO. However, I thought Jenna’s teenage rebelliousness was well portrayed. I also really loved Samantha’s relationship with her sister, Jamie, and how she has to work through the guilt and responsibility she’s carried for her sibling for over ten years. Their relationship was a highlight of the novel and I look forward to reading more of Jamie’s story in book #2. The biggest strength of this book is its suspense-filled, precision-crafted plot. With a little polish to male point of view and some fine-tuning to the occasionally clunky dialogue, I only see this series getting better. I look forward to Eason’s next book. She’s a refreshingly realistic voice in romantic suspense!
Posted by Unknown at 8:24 PM

I missed out on the tour for this one! This sounds really good and I'm definitely adding this series to my wishlist!

@Renee - I think you'll enjoy it. There's some rough spots but the storyline and pacing are terrific. Looking forward to book #2!