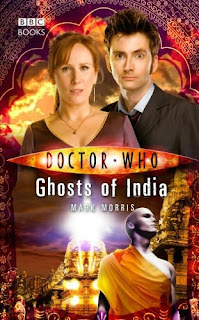 India in 1947 is a country in the grip of chaos – a country torn apart by internal strife. When the Doctor and Donna arrive in Calcutta, they are instantly swept up in violent events.
Barely escaping with their lives, they discover that the city is rife with tales of “half-made men,” who roam the streets at night and steal people away. These creatures, it is said, are as white as salt and have only shadows where their eyes should be.

With help from India’s great spiritual leader, Mohandas “Mahatma” Gandhi, the Doctor and Donna set out to investigate these rumours.

What is the real truth behind the “half-made men”? Why is Gandhi’s role in history under threat? And has an ancient, all-powerful god of destruction really come back to wreak his vengeance upon the Earth?

It’s been a while since I’ve read any Doctor Who novels, but with the arrival of Series 5 and a new Doctor later this week on BBC America, I thought the time was right to delve into some Who-related fiction. Ghosts of India is the first novel I’ve read featuring the Doctor (as portrayed by the inimitable David Tennant) and the irrepressible, no-nonsense Donna (Catherine Tate). The Doctor inadvertently brings Donna to India in 1947, a dangerous time for sight-seeing. With Britain about to withdraw, the country is a veritable powder keg, ready to explode as rival factions jockey for power and position. And of course, the country’s dense population and tense political climate is the perfect cover for an alien intent on human harvesting. I absolutely love the Doctor Who episodes that take place in some historical time period. The only element that makes those episodes better than the norm is when the Doctor gets to interact with actual historical figures. This book succeeds on all counts. The Doctor’s scenes with Gandhi are priceless, especially since it’s so rare to have the Doctor really and truly bowled over by a member of the human race. Speaking of the Doctor, Morris absolutely nails Tennant’s mannerisms and speech patterns. The Doctor’s manic energy and passion are really well captured on the page, as is his relationship with Donna. The best of friends, the Doctor and Donna have a truly unique, special relationship and I was overjoyed to see that Morris captures their friendship, right down to their constant good-natured snarking and sarcasm. Ghosts of India would make an excellent episode of the television show. And in hindsight, having viewed the spectacular finale of series 4 several times, as well as the journey the Doctor’s character takes following those “game changing” events, Morris’ portrayal of the Doctor/Donna relationship and the Doctor’s closing words are especially poignant. This novel fits well within the mythology of the Doctor Who universe, and is definitely one of my favorite novel portrayals of David Tennant’s Doctor. Recommended.
Posted by Unknown at 2:57 PM

I love when the Doctor goes all fanboy on a historical figure and his meeting with Gandhi did not disappoint! Probably my favorite moment from the book.

The first time I read this, I felt that the ending was a bit of a cop-out, but in listening to it as an audiobook a couple weeks ago, I thought it was brilliant. Sort of an "Everybody lives" moment that is so in keeping with the tone of the series.

The Doctor's final words touched me as well. I've enjoyed both of the Mark Morris Doctor Who novels and thought he did an especially good job with this one. I really hope we get more Ten/Donna books at some point, because I love the Doctor/Donna dynamic.

@Ruth - I agree, your take on the ending is spot on...the Doctor needs those "Everybody lives" moments every once in a while to keep going, no?

I think the end got to me especially in light of the S4 finale and then the specials. After all this is the 1st DW book I've read since last year...there's been so much activity on the show that I tend to keep trying to fit everything into that timeline, if that makes sense. And I love it when authors make everything "fit" with MY take on everything. That's just brilliant.

It would be lovely to get more Ten/Donna books...those did seem to get a short shrift, especially considering she and Martha each had one season...and it seems like there's more Martha books? Maybe I'm just making that up...LOL!