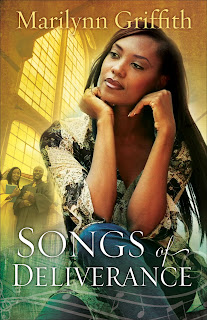 They say time heals all wounds – but sometimes that’s just not enough.

Fifteen years ago, Zeely Wikins and Ron Jenkins were students most people had stopped believing in. Lucky for them, their teacher recognized they were the cream of the crop and just needed the right soil.

Thought they went their separate ways, the past has called them back to the school and the teacher who wouldn’t give up on them. Now they’ll have to decide what love really means – and whether they’re willing to dance to a new tune to get it. But can they rediscover the songs of deliverance that once brought them together? Or will their secrets keep them apart?

In this soul-searching and suspenseful story, Marilynn Griffith invites you to believe in the power of truth, love, and redemption.

I started reading Songs of Deliverance with a major disadvantage. Though I’d been under the impression that this was a standalone novel, the events that fill the pages of Songs are closely tied to Griffith’s preceding book, Rhythms of Grace. That said, having stuck with this book, once I caught on to the rhythm of the story I couldn’t stop turning the pages. This story covers so much more territory than the back cover copy would lead you to believe. Songs is the story of Zeely and Ron, childhood sweethearts torn apart by choices and a past history marked with breathtaking pain and suffering, defined by regrets. Brought back to the school where their story began, by a dying teacher who’d loved them and believed in them in spite of the road of heartache their lives had taken, there’s a chance for a new beginning. But before that is possible, ugly truths must be confronted, and light must illuminate the dark scars that have given voice to the lie that one’s mistakes are irredeemable. Songs is also the story of Grace and Brian, also called back to face their pasts by the same teacher. As a teenager, Grace’s life changed forever the night she was raped, and now, years later, she’s hungry to know the child she gave up for adoption. Brian also has mysteries in his past that need uncovering, But as secrets come to light and truths are revealed, this each of these individuals must choose whether or not God’s grace can make beauty from the ashes of their pasts.

This book opens with a bang, literally – an attack on Grace, a shooting, and then the aftershocks settle in as the trauma of that night shakes the lives of Zeely, Ron, Grace, and Brian to the core. It’s a shocking moment that works as a trigger, bringing each person to a fork in the road where they have to start choosing life or death, and choosing life is a hard choice that comes with its own perils, because in order to fully embrace life and redemption, scars have to be ripped open from decades-old wounds. As I mentioned earlier, not having read the preceding book I started Songs at a disadvantage. This wasn’t helped by the story’s point of view changing constantly. Chapters are devoted to each of the four principle characters, and even a few secondary players get their own spotlight chapter. The constant back-and-forth, with no regular order to the changes, is enough to give a person whiplash. But the story here is so compelling that sticking with it for the payoff is worthwhile.

I can’t think of the last time I read a novel where the brokenness of the characters, the heartache they experience, their journey towards wholeness left me broken open as well. There’s a raw, aching, refreshing authenticity to the faith found within the pages of this book. I could see where the spiritual thread of this story could be too heavy for some readers, but there’s no other way in my view for Griffith to resolve the issues facing her characters without honest, desperate faith she gives voice to in these pages. This isn’t a comfortable read – Griffith tackles the results of rape, abuse, and abortion, to name a few, and the result of lies made and kept for years, and secrets buried for generations to preserve an image or hold on to a prejudice. A valid argument could be made, I suppose, that the storyline teeters on the edge of soap-opera. But while that may have kept me engrossed in the novel, what I’ll take away from this book is the inspiring, raw and honest authenticity of each character’s faith. Songs of Deliverance is a beautifully-rendered story of the beauty that can come from brokenness, and of God’s never-failing redemptive power.
Posted by Unknown at 7:35 PM