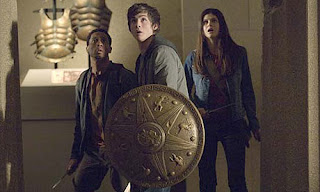 So I went to see Percy Jackson & the Olympians: The Lightning Thief last night, and I've got to say you're probably much better off seeing this movie if you haven't read the books. Just for starters, in the first movie Percy is like 12, and in this movie he's what, 16 or maybe even 17? Totally changes the character's story arc. I really don't think the script writers read much more than the back cover copy of the novel - the movie is a very, very loose adaptation of Rick Riordan's story. The book's not what I would call classic literature by any stretch, but the movie really rather dumbs down the storyline thanks to generous rewrites and omissions or rearranging of characters and/or events.

However, that said, I didn't hate this movie - you just have to take it for what it is, just escapist entertainment. Sean Bean absolutely cracked me up as Zeus - he enjoyed over dramatizing every line a little too much, LOL! :) Kevin McKidd was an extremely odd choice to play Percy's dad, Poseidon, but he worked well opposite Logan Lerman as Percy. I wasn't sure about Lerman when the movie started, but by the end he'd won me over. I could definitely see him as the older Percy, if the movies were going to bother to follow the timeline of the books, so he works. Alexandra Daddario worked as Annabeth - much better than she works as Kate in my new favorite show, White Collar. Seriously, Kate needs to GO...but that's a whole other blog post. ;-) Brandon T. Jackson was a pretty perfect Grover - of the three leads, he probably ended up being my favorite. Jackson had some great comic scenes.

Pierce Brosnan was absolutely (and, I'm convinced, completely unintentionally) hilarious as the centaur Chiron. I kept thinking must have taken this role, viewing it as his chance to play the wise wizard - and since Gandalf and Dumbledore are already taken care of, he's stuck with playing a hairy horse-man. Poor Pierce. :-P Uma Thurman as Medusa was another bit of random celebrity stunt-casting. Definitely not Thurman's strongest role (haha). And I have no idea why Rosario Dawson was in this movie playing Persephone. My memory of the Persephone story is rather hazy, but I don't remember her being so, um...slutty?? Not to mention that she's a non-entity in the book, but whatever. My least favorite actor in the movie has to be Jake Abel as Luke - lame, lame, lame. If you're going to rewrite the book and amp-up his role in the story, for goodness' sake please get an actor that can play threatening instead of petulant and whiny. *rolls eyes*

Enough about the actors, since the acting is rather hit-or-miss and the script can be pretty lame, it leaves A LOT to be desired. This movie's strongest point is the special effects, some of them are quite awesome. The Fury, though under-represented, was fantastically creepy, and the Minotaur looked terrific. Chris Columbus definitely had some great new and improved special effects technology to play with since his Harry Potter days. The scenes where Percy controls the water were also handled really well IMO. I also liked the way the gods transitioned from their godlike form & size to their human disguises...those transitions were pretty seamless. Seeing this movie for the special effects alone made the whole thing worthwhile, some of the scenes were that cool and fun to see.

Speaking of watching something fun, seeing the Parthenon wrecked was a pretty random surprise, considering that a visit to Nashville is not even mentioned in the book. I don't need to go to the movies for a nice shot of I-24, I know that stretch of road like the back of my hand. Not to mention that I have never, ever seen Centennial Park so full of happy smiling families and kids. The moment was a little Twilight Zone-ish, just sayin'. ;-) If the theater we were in last night was any indication, the representation of Nashville was a tad fantasy-landish. LOL!

So yeah, that's about all I've got to say about this movie. It's fun, but having really liked the books I have to acknowledge that there are a TON of missed opportunities. Boo Chris Columbus! :-P But if you're looking for some escapist fun, this might just fit the bill. The pacing is great, the three leads are fun to watch play off each other, and the special effects can be pretty spectacular. If you're a real fan of the books I'd be curious to hear your thoughts...
Posted by Unknown at 5:49 PM

I saw it today, having never even heard of the books, and enjoyed it very much. I thought it more entertaining than the HP movies. But I'll admit I went to see it because Brosnan, Bean and McKidd were in it. :-)

I have read the books and thought from seeing the trailers that it differed from the book. Pierce looked hilarious though :) Thanks for the review!

Do you recommend the books? The movie has looked really good in all the commercials I have seen, and what I can discern of the premise seems really awesome. (I skipped most of your review so I don't spoil myself.)

PS I thought that was Sean Bean! Yay Boromir!

Ruth, I forgot to mention that the packed theater I was in applauded at the end of the movie, so we weren't the only one's who enjoyed it. And for those thinking of taking little kids, the five or six year old boy sitting next to me hid his face against his mom's side a number of times, and I could hear her reassuring him. I didn't think Pierce Brosnan was hilarious, or that Sean Bean overplayed his lines, and I was thrilled to see Kevin McKidd on the big screen. But you know what I totally missed until you mentioned it? That it was "Kate" from WC playing Annabeth!

@Lori - I am so glad you enjoyed the movie! I really did like it, but I was more torn about my opinion than I expected, given that I've really enjoyed the books in the series that I've read thus far.

Oh, and should say that even though I interpreted a more humorous take on Bean and Brosnan in this movie, I was really happy to see them in this type of fun flick. The cast definitely had a good balance of up-and-coming and tried-and-true acting talent.

@Muse - You're welcome. :) Yes, it's pretty different from the books!! And Pierce was a lot of fun as a centaur!

@Jamie - I THOROUGHLY recommend the books. They are so much fun. I love the way Riordan riffs on all the stories of the Greek gods and goddesses - it's quite entertaining to see them translated into the modern world. :)

Ruth, having just read this series and seeing this film, I completely agree with your review! Once again, it's like you've taken the thoughts out of my head and put them into much better words. :)

I kept thinking, "Hey, where's Ares?" and several other characters that were completely left out. Then there were those non-existant scenes stuck in there... but oh well, I still enjoyed the film and was glad I went.

I wonder if they aren't planning on making all 5 books into movies since, like you said, Percy was 12 at the beginning of the books... not driving an old truck at 16 or 17. It didn't mention anything about "the prophecy"... so who knows?

@Nat - SO glad to hear your thoughts, Nat! With some distance between me & this viewing of the film, I can say I enjoyed it - I've had time to get over the surprise/disappointment with how so much of the story was rewritten. In a way, if I'm being really honest, I wouldn't be disappointed if they didn't make more movies - the books are so much richer, know what I mean? But taken by itself, the movies would at least be some fun, family-friendly entertainment, right?