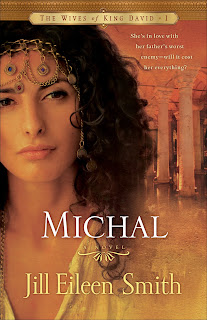 The daughter of King Saul, Michal lives a life of privilege – but one that is haunted by her father’s unpredictable moods and competition from her beautiful older sister. As a girl, Michael quickly falls for the handsome young harpist, David. But soon after their romance begins, David must flee for his life, leaving Michal at her father’s mercy in the prison that is King Saul’s palace.

Will Michal ever be reunited with David? Or is she doomed to remain separated from him forever?

Against the backdrop of opulent palace life, raging war, and daring desert escapes, Jill Eileen Smith takes you on an emotional journey as Michal deals with love, loss, and personal transformation as the first wife of King David.

With her debut novel, Jill Eileen Smith explores the tumultuous life of Michal, daughter of King Saul and the first wife of David. Honestly, Michal is a character that I never really gave much thought to before. It’s too easy to fall into the trap of thinking of the people that populate the pages of scripture as flat characters, rather than as the wonderful, flawed, fully-rounded human beings they actually were, filled with fears and hopes. Though Michal’s life has been reduced to mention in only a handful of verses, she witnessed an incredible amount of history and heartbreak. The way Smith brings Michal to life, from her early years as a young princess in Saul’s court, in love with David the simple shepherd, to the unfathomable tragedy she witnessed as Saul’s family fell from power, absolutely captivated me from the first page.

Smith’s narrative closely follows the Biblical account of David’s life and rise to power found in 1 and 2 Samuel. In many cases, she incorporates some of the actual dialogue from the scriptures which adds further authenticity to the novel. Her research and passion for the time period clearly shines through in her vivid descriptions of palace life. It was easy to imagine myself in that world, walking alongside Michal and David, drinking in the sights, sounds, and smells of ancient Israel. The book covers decades in Michal’s life, often with jumps of one to six years between chapters. Those transitions can be a little abrupt, but overall they did not detract from my enjoyment of the story or my complete immersion into Michal’s world. And although the focus of this novel is Michal, David also emerges as a fascinating and complex man. Smith gives readers a window into the personal, family side of David, while not neglecting David the king and worshipper so well known in the pages of the Bible. I wanted to smack him when he started accumulating multiple wives. Through Michal’s role as first – and childless – wife, Smith gives a very human face to the toll such a lifestyle must have taken on women during that time.

I really appreciate how Smith depicted the many cultural and social standards a woman in Michal’s position dealt with seem so foreign today. Seeing Saul’s descent into madness from the perspective of a daughter was absolutely terrifying, especially since as a woman she was wholly subject to his dictates as her father and king. I cannot imagine the courage it took to help David escape Saul’s wrath in the early days of their marriage, and then to endure being given to another man when Saul declared her marriage to David void. It’s easy to understand Michal’s struggles with anger and bitterness, and how she clung to her dream of being declared David’s queen as her salvation. In a culture that placed a premium on a woman’s ability to provide her husband with children, Michal’s struggles with anger, fear, and bitterness over the uncertainty of her position at court are heartbreaking. Her journey towards redemption, and a personal relationship with David’s beloved God after enduring so much heartbreak and horror was beautiful to witness. Michal does not get your typical happy ending, but it’s the right ending for her story, offering the hope and restoration that only a relationship with God can supply to a life torn asunder by circumstance. Very well done – I look forward to the sequels!
Posted by Unknown at 10:37 PM

If you enjoyed other books by Jill Eileen Smith, you'll love her latest novel in the Wives of the Patriarchs series: Rachel. Jill is hosting a terrific giveaway in celebration of the book's release. Details available here. The giveaway ends February 15th so enter soon for your chance to win!