Review: Nothing but Trouble by Susan May Warren 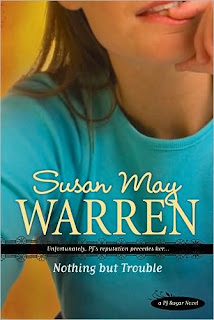 * After traveling the country for ten years and hoping to shake free from the trail of disaster that’s become her life, she needs a fresh start.

* The last person she wants to see when she heads home for her sister’s wedding is Boone – her former flame and the reason she left town.

* Her best friend’s husband absolutely did not commit the first murder Kellogg, Minnesota, has seen in more than a decade.

What PJ doesn’t know is that when she starts digging for evidence, she’ll uncover much more than she bargained for – a deadly conspiracy, a knack for investigation, and maybe, just maybe, that fresh start she’s been longing for.

Ten years ago PJ Sugar left her small hometown of Kellogg, Minnesota, in disgrace, and has been running from her past ever since. After an unexpected call from her sister for help, PJ does the one thing she thought was impossible – returns to the scene of her “crimes,” the town she fled after earning the nickname “nothing but trouble” and being accused of setting fire to the country club. From the moment she sets foot in Kellogg for her sister’s wedding, everywhere PJ turns it seems that her failures and shortcomings are dredged up, crushing her hopes for a fresh start. She was always the wild child, frustrating her mother and leaving her best friend to cope with becoming a single parent. But perhaps the most painful – and dangerous – memories are wrapped up in the form of handsome, blue-eyed bad boy-turned-cop Boone, her former flame. Boone’s betrayal is the main reason she kept running, and his magnetic pull even ten years later is the primary test of PJ’s resolve to prove she’s genuinely changed.

PJ Sugar is a great heroine – fun, feisty, and daring, she’s no shy wallflower. A relatively new believer, she’s desperate to prove she’s finally making some good choices and will no longer disappoint people. Her drive to prove her worthiness to others and to God is extremely well-drawn and relatable. The harder she tries to fit in, the more she fails, but when she starts to realize that maybe, just maybe, God can use her redeemed, messy, unorthodox self in spit e of her best efforts does PJ start to loosen her grip on the past and walk into a future full of promise. Warren always does an excellent job incorporating a subtle spiritual thread into her stories, and PJ’s is no exception – it works because Warren doesn’t hammer you over the head with a message, she presents faith as lived out by her very real characters.

Susan May Warren has long been one of my favorite authors, but it’s been a while since I’ve picked up one of her novels (my TBR stack is out of control!). From the first, Nothing but Trouble was a great reminder of why I love Warren’s writing. The dialogue hums with life, and the plot grabs you from the first page and never lets go. The characters, from PJ to her mother to Boone, are multi-faceted and wonderfully real. Warren’s characters aren’t cookie cutter, flat creations – they’re messy and real and fun. Speaking of Boone, Warren excels at writing swoon-worthy heroes, and in this novel she gives us not one, but two charismatic leads to vie for PJ’s affections. I can’t wait to see how that one plays out (I’m pulling for Jeremy, the mysterious private investigator). I loved how Warren gives a nod to her time in Russia as a missionary. The unexpected culture shock PJ encounters with her sister’s in-laws provides fodder for some of the book’s most comical scenes. Part chick lit, part cozy mystery, Nothing but Trouble is an expertly plotted tale of romance, redemption, and grace.

You are a great writer, my friend.

What Liv said. You are one of the best reviewers I've ever read and you've once again convinced me I Must Read This Book!

Wow! I'm stunned. Thank you so much for your thorough and oh-so-fabulous review - even I want to read the books. :)

Truly, thanks so much for your care and taking the time to read my books and share about them on your blog.