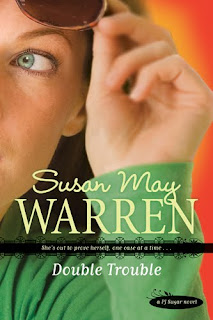 “I’m on the case, Jeremy. A great PI follows her instincts.”

PJ Sugar has finally found something she’s good at. Now she’s trying not to mess it up. Her first official case as a private investigator – well, technically a PI’s assistant – is house-sitting for a witness in protective custody. No danger involved, assures her boss Jeremy Kane, much to PJ’s disappointment.

At least PJ can take the next ten days to figure out the rest of her life…especially whether or not she should accept Detective Boone Buckam’s marriage proposal. But one break-in by a late-night prowler is enough to put Boone’s request on hold and send PJ’s sleuthing skills into overdrive. Clearly this witness is hiding something…and it may cost PJ her life.

After returning to her hometown after ten years on the run, and solving a major crime to boot, PJ Sugar is at long last ready to settle down and build a life for herself. She’s working as an assistant to Jeremy Kane, private investigator. It’s a dream job that feeds her soul-deep desire to make a difference in the lives of others, an opportunity to prove that she’s moved beyond her past. Settling into the new job is complicated by her old sweetheart Boone, who’s ready to settle down and pressing for a permanent commitment. PJ’s first solo assignment is house-sitting for the key witness in a major criminal trial. What should be a quiet gig becomes complicated when it becomes clear that their witness in protective custody is being targeted – and with PJ standing in for her, suddenly her life is on the line. Throw into the mix an elderly neighbor in need of help, and PJ’s nose for trouble has once again gotten her in way too deep. PJ must put her overactive imagination and all her sleuthing skills to work to uncover the bad guys – then, if she survives, she can figure out the kind of future she wants, a choice symbolized by the affections of two very different men.

I’m really glad I read the first two PJ Sugar books back-to-back. PJ’s story isn’t limited to standalone adventures – having the momentum that comes from reading her first two adventures back-to-back, it’s easy to see Warren’s superb characterization. In book one, PJ had to face her fear of overcoming her past, of living out a faith that would enable her to overcome the label “nothing but trouble” that earned her such notoriety. Double Trouble takes PJ a step further, diving headfirst into her new life, battling frustration and despair when getting it right seems like an unattainable goal. The idea God can work through our imperfections - in spite of them - and that accepting grace and trusting that His providence is sufficient is powerfully portrayed. The spiritual truths resonate because Warren’s characters are so wonderfully, achingly well-drawn and relatable.

I also loved how Warren explores the idea of choosing between good and better throughout the book. Both of PJ’s romantic choices are classic Warren heroes, each swoon-worthy in his own right. PJ’s romantic dilemma is so hard because both options are genuinely good guys, but in this volume Warren starts to develop critical differences between Boone and Jeremy and the futures they represent. While Boone’s affection for PJ is genuine, he represents PJ’s past, and his view of her is filtered through their shared experiences. Jeremy’s another story – he represents a future uninhibited by memories of PJ’s past exploits. He loves her, trouble-making tendencies and all, but most importantly believes in her now and in her potential. Through PJ’s character, Warren forces readers to confront the issue of trusting God – not settling for the good, but daring to dream and reach for an as-yet unknown future that He’ll walk one through each step of the way, if only we’ll invite Him on the journey. Double Trouble contains all of the elements that made PJ’s first adventure a success – snappy dialogue, well-drawn characters, and a page-turning plot. It ups the ante with more intense action, a better mystery, and a compelling spiritual thread that, if you let it, will encourage and inspire you to embrace God’s grace and provision. I can’t wait for book three!

Click to read my review of Nothing but Trouble.

Click to get info on the Double Trouble contest!

I SOOOOOOO want to read this!

@Juju - Thanks so much for visiting my blog! Hope you get to read Double Trouble soon - I can't wait for the 3rd book myself. :)