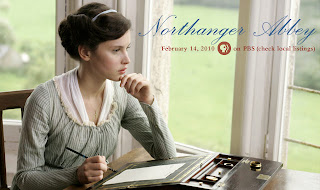 Just a reminder, if you haven't seen the latest film adaptation of Jane Austen's Northanger Abbey, PBS is airing an encore presentation tonight on Masterpiece Classic. I thoroughly recommend this film, it's so much fun - plus, JJ Feild plays the hero! *swoon* :) Here's a bit about the story from the PBS website:
Catherine Morland (Felicity Jones, Meadowlands) has an ordinary life and a feverish imagination. When she gets invited to Bath, Catherine is immersed in a world of elaborate balls and handsome men. When one suitor takes her to his family estate, Northanger Abbey, Catherine becomes mired in a world of fact and fantasy. Is there a dark mystery behind the locked doors of Northanger Abbey? Why has her budding romance suddenly been cut short? Also starring JJ Feild (The Secret Life of Mrs. Beeton), Andrew Davies adapts Austen's gentle parody of gothic fiction.
Posted by Unknown at 11:19 AM

I really loved this one -- I thought they did an excellent job of capturing Catherine's imagination without making the film seem silly. There's a fine line there and it thought this adaptation played it perfectly.

@Ruth - I couldn't have said it better. This film is the perfect balance of the comedy and drama required to make it work.

Woot! Gonna set my DVR on that!

Question: I am a Shameful Bookperson and haven't read NA yet. Is the story pretty easy to follow?

@Jamie - Oh, definitely! This movie does a great job of translating the story to screen, very easy to follow.

I read Northanger Abbey fairly recently and I'm so excited to see this movie! :)

I loved it! I really like how they did the book scenes. I was wondering exactly how they would capture Catherine's imagination. The characters seemed so perfect to me. Isabella and Eleanor were pretty much exactly as I imagined them to be and Catherine was the perfect sweet/naive girl as she was in the book. Of course, it was very condensed, but parts of the book are really dragged out, like all of the visits to the pump-room. I loved how creepy General Tilney was. The mystery of Northanger Abbey was great.

@Jennifer - Yay, so glad you enjoyed it! I also really liked how they visualized Catherine's imagination at work - lots of fun. :)