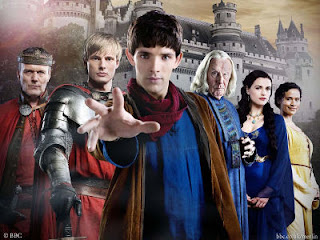 Good news for fans of Merlin (the first season of which aired on NBC last summer) - SyFy has acquired the rights to air the first TWO seasons of the show, starting in April. All I've got to say is, FINALLY. Merlin will be a MUCH better fit at SyFy than at it was at NBC. Incidentally, the first season of Merlin releases on DVD April 20th.
Posted by Unknown at 3:39 PM

Email ThisBlogThis!Share to TwitterShare to FacebookShare to Pinterest
Labels: Merlin

Hooray! Me so happy!

@heidenkind - I had a feeling this post would make you happy. :)