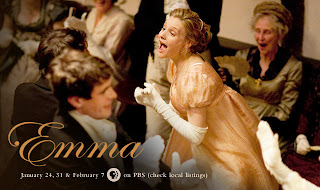 Well, in case ya'll couldn't tell last week, I was a little busy with reading and book reviewing, so the final two Emma reviews never happened. I mean to rectify that situation directly. :) Here is the episode two summary from the PBS website:

Emma teases Mr. Knightley about Jane, but he remains tight-lipped. Meanwhile, Frank and Emma plan a ball, and Emma wonders whether she might be in love with him. With her matchmaking officially abandoned, Emma feels cooped up and bored. Mr. Knightley suggests a day trip to Box Hill for a change of scene. He also tells Emma that he suspects Frank and Jane are secretly in love. Emma rebuffs the suggestion — she can personally vouch for Frank's indifference to Jane.

I have to say, I'm not a fan of how PBS divided this program so it would cover three weeks' worth of Masterpiece Classic time. To get two hours the first week, and then only a hour the next (really, only 45-50 minutes) just left me feeling a little ripped off. The show is too good to watch in such "tiny" segments, LOL! Needless to say, this program will be enjoyed many times over when my DVDs arrive from Amazon (currently it's only $21.99!).

This segment of Emma explores our heroine's misconception that she's in love with Frank Churchill (played by Rupert Evans). How this plays out on-screen is a great example, I think, of how well Sandy Welch's script and Romola Garai's performance work well to give this incarnation of Emma a little more depth, spending a little more time exploring why she acts the way she does, and how she perceives the circumstances playing out in her sphere of influence. I love how Garai dances between Emma's propensity for self-centeredness and her slowly awakening care and compassion for those around her, such as Harriet (Louise Dylan). Speaking of Harriet, I've been pretty pleased with Dylan's performance. She's a relative newcomer (see her IMDB page), but with appearances in Merlin and Lewis, and now this, she could be well on her way to building a solid resume.

My favorite introduction in this episode is the infamous Mrs. Elton - I actually think I screamed when she walked on-screen. Mrs. Elton is played by Christina Cole. Not only is she a fantastic actress in my opinion, but she has the market cornered in playing classic shrews. In addition to the role of Mrs. Elton, she's played Caroline Bingley in Lost in Austen and Blanche Ingram in Jane Eyre (not to mention noticable guest spots in shows like Doctor Who and Poirot). Cole is a perfect match to Blake Ritson's icy and pretentious Mr. Elton, and her take on Mrs. Elton provides an excellent foil to Emma, who is left positively stuttering with rage and frustration at her impudence. When Mrs. Elton first appears in church, Mr. E.'s introduction of her was hilarious - I loved how Ritson deadpanned his delivery of expounding on one of his favorite scriptures, "let deceitful lips be made dumb." That was just so unexpected, but so appropriate, I loved it!

I mentioned earlier the whole Emma/Frank Churchill dynamic - I think it plays out really, really well in this adaptation. I loved Emma's rather dewy-eyed infatuation with Frank. Garai plays it in a way that strikes me as very honest, and I think underscores the fact that while Emma thinks she can run everyone else's lives, she is completely clueless when it comes to knowing her own heart. Churchill completely takes her for a ride, but I have just the tiniest bit of sympathy for her because Garai lets one see that Emma's affections could be in peril. She's a control freak, yes, but I like her. :)

Of course the highlight of this program is the way the Knightley/Emma relationship develops. There's more time to see events unfold here, versus in the 90 minute or so feature films that have been Austen-film staples for the last ten-plus years. Jonny Lee Miller's take on Mr. Knightley has been absolutely FANTASTIC. My favorite moment in this episode comes at the Highbury ball. Not only does Emma get to witness Knightley's chivalry (when he rescues Harriet from being snubbed by Elton), but she acknowledges that where Mr. Elton was concerned, Knightley was 100% correct. That's major progress, right people?! :) And then there's the dance. Excuse me while a swoon for a second. ;) To my knowledge, this is the first Emma adaptation that doesn't preface the dance with the exchange that Emma and Knightley aren't "so like brother and sister that dancing would be improper" (or something like that, just quoting from memory here). THANK YOU, Sandy Welch, for skipping that quote. It serves to "freshen" the moment, since all the story beats are so well-known, plus it doesn't throw up in one's face that Knightley is like twice Emma's age (or close to it). I have no problem with age differences in romantic pairings, don't get me wrong - I'm just tired of having it mentioned in Emma films because it always seems to come off rather awkwardly to my ears.

All that to say - the look Knightley gives Emma when she says she'll dance with him, if only he'll ask - that pause, that look, is to die for. Well played, Jonny Lee Miller, well played. In that moment, Miller lets you see just how much Knightley cares for Emma. There's no frustration with immaturity, there's only love, affection, and a belief in their possible future that's lovely to see. This Knightley is intense and determined, and I love it!! I just have to point out, though, the hilarity to be found in one of his solo scenes (after the ball, when he visualizes dancing with Emma). That moment is such a rip-off of the Darcy-watching-Elizabeth-play-the-piano-scene-and-then-daydreaming-about-it moment from Pride and Prejudice that it's not even funny. Well, it is funny, especially when you consider that he's imagining watching Emma dance when he was dancing with her...the total disregard to perspective cracked me up. ;)

I could go on and on, and mention Knightley's smack-down of Mrs. Elton regarding the as-yet-undetermined Mrs. Knightley being the only woman who would manage his social affairs, or Knightley's thinly veiled jealousy and concern about Frank's relationship with Emma, but I suppose I'll stop now. :) So tell me, at what point did Jonnny Lee Miller win you over? Because I refuse to entertain the possibility that he didn't. ;)
Posted by Unknown at 4:24 PM

I totally noticed that scene where Mr. Knightley pictures _himself_ dancing with Emma. The lack of perspective there was laughable, but it was pretty easy to look over.

Thanks for all of your reviews. I've really enjoyed reading your blog.

(Oh, and he won me over from the beginning. :D)

@Jennifer - Thank you so much for your comment, so glad you are enjoying my ol' blog. :)

"Because I refuse to entertain the possibility that he didn't [win you over]."

Who doesn't "I heart JLM"? He is, imo, the best Knightley ever! Again, an excellent review Ruth!

I really liked the second half of Emma--I watched it all together on the DVR, and I'm happy I did. That moment when Knightly and Emma are dancing and he's staring longingly into her eyes... I was like, "Rawr," but it's still funny because Emma is completely oblivious.

I also love Mrs. Elton. I don't know how Emma can stand to be around her. :P

@mrsthorntondarcy - I am inclined to agree with you, though I do quite like Jeremy Northam & Mark Strong's portrayals of Knightley as well. But JLM took it to another level. :) Thanks for the comment! Oh and thanks for the award too!