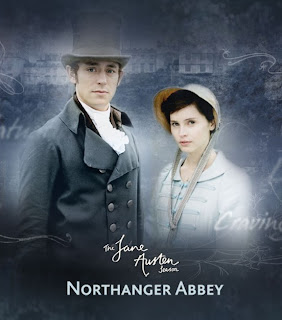 Since Northanger Abbey was rebroadcast last week on Masterpiece Classic, I thought it might be time to pull out my DVD and revisit the film and my initial impressions of it. I originally reviewed the film in January 2008, when it aired as part of the Jane Austen season on Masterpiece. So without further ado, here's my original post on the movie:

"Perhaps after all it is possible to read too many novels."— Henry Tilney in Northanger Abbey

Time to rehash Northanger Abbey, and no surprise here, but I LOVED it. It's got everything going for it - a smart script (courtesy of the inimitable Andrew Davies), excellent direction and pacing, and a spot-on, practically perfect cast all giving sparkling performances. This is the first film adaptation of this story that I've seen - and while I have nothing to compare it to movie-wise, I have a feeling that it is leaps and bounds better than the previous BBC version.

At the moment I'm feeling too lazy to write a decent summary of the story, so thanks to Kaye for letting me borrow her version.

The daughter of a country clergyman, Catherine Morland has a passion for gothic romance novels and a vivid imagination. She gets the opportunity to go to Bath for the season with family friends. While in Bath, she makes the acquaintance of the Thorpe family, specifically Isabella, who is engaged to Catherine’s brother, and John. Isabella teaches Catherine the fine art of flirtation, and soon John is showing romantic interest in Catherine.

Catherine, however, isn’t interested in the wild John, but in the quiet Henry Tilney. Henry’s father, General Tilney, under the misinformation that Catherine is wealthy, invites Catherine to come spend some time at their ancestral home, Northanger Abbey. The Abbey answers all of Catherine’s gothic imaginings; and as soon as she arrives, the fun begins. 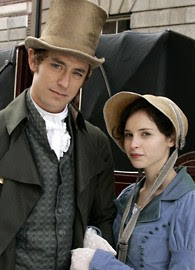 Felicity Jones delivers a wonderful performance as the highly imaginative Catherine. Her wide-eyed ingenue is wholly believable (and, wonder of wonders, I didn't find her annoying...LOL). The scenes where her imagination gets caught up in some outlandish, Gothic romance are hilarious and oh so much fun to watch.
Catherine's friend, the flirtatious Isabella Thorpe, is played by Carey Mulligan - she's an actress to watch IMO. She played Kitty Bennett in the 2005 version of Pride and Prejudice, as well as appearing in Bleak House and the forthcoming My Boy Jack (co-starring Daniel Radcliffe, to air on Masterpiece Theatre later this year). She reminds me a bit of Romola Garai (most recently seen in Atonement), who I tend to like, but occassionally gets on my nerves by coming off as rather vapid. I like Mulligan...she always seems to have a great deal of spunk and sparkle in her performances.
Our hero, the noble Henry Tilney, is played by JJ Feild. I love JJ (yeah we're on a first name basis like that...LOL...in my dreams, I know, I know...) and thought he was perfectly cast for this role. He struck a nice balance between the serious and the teasing as regards his relationship with Catherine. JJ's got a slightly nerdy edge to him, but that just makes him all the more endearing, doesn't it? He's also going to be an actor to watch...he's appeared in The Railway Children (made quite an impression on me even then, LOL!), Poirot: Death on the Nile, The Secret Life of Mrs. Beeton, and Ruby in the Smoke.
The director, Jon Jones (also directed Mrs. Beeton) is to be applauded for his work - the pacing of the film was excellent. I loved the costumes and sets - the shots of Northanger Abbey were wonderful, with a deliciously creepy feel. The camera work and lighting all succeeded in striking the right balance between Catherine's imagination and reality - the Abbey scenes and just enough of a suspicious feel that Catherine's imaginings don't seen entirely unfounded. And I loved the score & main theme by Charlie Mole - he also scored Mrs. Beeton, as well as An Ideal Husband and The Importance of Being Earnest. His work succeeds in striking the right balance between suspense and the comic elements of the story.
My one very slight quibble is with the ending...it seemed a tad abrupt. Of course, that's probably due to the restriction of a ninety-minute running time. Also, I would've much rather ended on a picture of Henry and Catherine, instead of old man Tilney, but that's just a personal preference (LOL). Other than that, which I really wouldn't classify as a complaint at all, I thought this film was just about as perfect as can be. It strikes just the right tone and pace in bringing to life Austen's gentle parody of the Gothic fiction so popular in her time.
The DVD of Northanger Abbey is available for purchase here.
***I will say this, my opinion of Romola Garai as an actress has improved somewhat since I wrote this post back in 2008! ;-)
Posted by Unknown at 4:40 PM

I have this recorded on my DVR...debating weather I should read the book first. I do know what the plot is so maybe it would be ok to watch first :)

@Muse - I say go for it. I hate to think of JJ Feild sitting in limbo on the DVR, being unappreciated. ;)

I have yet to watch last month's Emma. Must get to that!

Again, I've read the book but haven't seen the series. I must watch it!

@mrsthorntondarcy - Hope you get to see this film soon, I think you'll really like it!

@Jennifer - So glad you enjoyed this one! I rewatched it on DVD for the first time in probably a year - I'd forgotten how much fun the movie is. :)