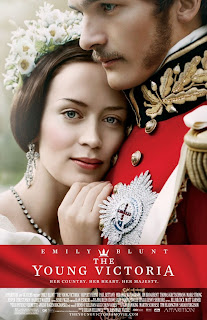 I have been waiting probably about a year to see The Young Victoria. It finally opened around here on Christmas Day, and I went to see it with two friends on New Year's Eve. It was well worth the wait. It's costume drama and spectacle at its finest. :) When I was in college I went through this phase where I was really interested in Victoria and Albert. This was most likely spurred by the broadcast of the Victoria & Albert miniseries in 2001. That miniseries is a much more comprehensive look at Victoria's reign, and stars the aptly named Victoria Hamilton as the Queen (she's appeared in everything from Pride and Prejudice as Mrs. Forster to Lark Rise to Candleford) and Jonathan Firth (brother of Colin Firth!) as Prince Albert. However, for a shorter but equally enthralling glimpse at the early years of Victoria's reign, The Young Victoria can't be beat. :)

Emily Blunt gives, I think, one of the best performances of her relatively short career, transitioning easily from the teenage princess to young monarch and bride. Not being too far removed from the actual age Victoria was at the various points depicted in the film probably helped, too. Blunt is by turns spunky, vulnerable, and perfectly regal. Victoria's childhood is really incomprehensible to view, by today's standards or any other, really. Coddled in the extreme and sheltered from all outside influences by her mother the Duchess of Kent (played here by Miranda Richardson) and her mother's confident/probable lover Sir John Conroy (played by the delish Mark Strong *wink*), Victoria was raised in a bubble and it's really quite a testament to her character that she turned out as well as she did IMO. As the only heir of her uncle, William (wonderfully played here by the talented Jim Broadbent), Conroy and her mother made numerous futile attempts to get Victoria to sign papers authorizing a regency should the king die before she comes of age. Thankfully, the young princess withstood the tremendous pressure being brought to bear against her. I've got to say, the role of Conroy is probably the most distasteful bad guys I've seen my beloved Mark Strong play. The man is presented as so utterly amoral, so politically calculating and cold-hearted, the scenes showing his attempts to manipulate Victoria are rather chilling.

Rupert Friend's performance as Prince Albert was probably the surprise of the movie for me. I didn't know the guy had it in him, acting-wise. (Anyone think he's a dead ringer for Orlando Bloom?) He first gained notice in the 2005 version of Pride and Prejudice where he played Wickham. I have to confess, I placed him in a pretty-face-but-no-substance acting "box," and goodness I was wrong. The man has some serious potential. He and Blunt have terrific on-screen chemistry, which certainly helps and is needed when portraying a classic love story like Victoria & Albert's. This film drove home the point once again what a miracle, really, their love story was considering the restrictions and manuevering that their lives endured. The were pawns in the chess game of European politics, and there's a great little scene in this film that takes place shortly after Victoria and Albert first meet, where he urges her to find a husband who will play the politics game with her. And indeed that's what the pair of them did eventually - joined forces, mastered the rules of the game, and became formidable players in English and European politics.

Besides Mark Strong, another old favorite of mine makes a fantastic appearance in this movie - Paul Bettany does a fantastic job playing Lord Melbourne, Victoria's first prime minister. Melbourne was apparently quite a character, obviously adept at manipulating people in order to see his ends met. It's interesting to see how this works negatively when a young and very loyal Queen Victoria refuses to accept new election results that see Melbourne thrown from power. This leads to the first really tumultuous period of her reign when she falls drastically out of favor with the British people. It's a harsh lesson, and her subsequent marriage to Albert sees his influence helping her learn to better walk a political tightrope. One of my favorite scenes in the movie is when Albert confronts Melbourne about his rather condescending attitude towards him - not only is it historically interesting, but it's a very well-played moment between Friend and Bettany (the former really holding his own against the latter). This is followed by one of Bettany's strongest scenes in the film, when he admits that Albert could prove to be a valuable ally and partner in Victoria's reign. For a character like Melbourne, such a moment was humbling I'm sure, and Bettany played the scene really, really well.

The Young Victoria is sure to be a lock come Oscar nomination time for costumes and set design. Every little thing about the movie just looks spectacular, it's a positive visual feast for the eyes. Speaking of feasts, the banquet scene early in the film celebrating King William's birthday is an amazing spectacle. The richness and opulence in that scene alone is mind-blowing, even more so when you think of the traditions and discipline and planning that would have gone into such an event. I've also got to give a nod to the gorgeous score by composer Ilan Eshkeri. He's responsible for Stardust, one of my favorite film scores. And while TYV doesn't have quite the unique themes and flourishes appropriate to a fantasy film, it's a beautiful work nonetheless.

This is a movie that definitely leaves you wanting more - more story, more of Victoria and Albert's lives. I love their love story, and this movie more than delivers beautiful, heart-stopping look at the beginning of their legendary love affair. Emily Blunt and Rupert Friend both come out of this movie winners, delivering strong, memorable performances. This is particularly the case for Friend - Albert was, I think, really a Renaissance man, and a man of character and deeply held moral convictions. In many ways he is responsible for the advancements for which the Victorian Age is known. For Friend to be able to portray that in such a compelling way speaks well of his talent and acting future. Oh, this reminds me - another of my favorite moments in the movie is when we get to see Albert ever-so-gently engineering a tentative reconciliation between Victoria and her mother. Really, after the way she's treated by her mother it would be easy to understand if Victoria never wanted to see her again. But this effort on Albert's part, and seeing Victoria and her mother come to terms with each other is quite well done and moving. It was a powerful reminder to me of how much easier it is to hold on to grudges and wrongs, but the strength it can take to just come to terms with the past is another thing entirely.

Two books I highly recommend if you're interested in learning more about Victoria and her family are Victoria's Daughters by Jerrold M. Packard and Queen Victoria by Lytton Strachey. Packard's book is especially interesting because you get a look at how Victoria engineered her children's marriages and gained the moniker "Grandmother of Europe." For someone who so resented being a manipulated "chess piece" in political dealings, she and Albert apparently had no qualms about doing the same thing to their children, sometimes with quite tragic results. It's a fascinating book.

The Young Victoria is a wonderful film, beautifully executed on all levels, and well worth seeing whether you're interested in the history or just in the mood for a great love story. :)
Posted by Unknown at 8:02 PM

I was interested in seeing this movie, too, but the reviewers on At the Movies said it was dull and that Emily Blunt wasn't good in the role of Victoria. But then they also both said to skip Sherlock Holmes, so... clearly they don't know what they're talking about! :)

Lucky you, Ruth. I can just imagine how spectacular this movie may be on a huge screen. It hasn't been released in Italy ( and probably it won't be) and I had to get the DVD on line -it came out in England soon after the distribution in theatres.I just saw it on my TV screen and loved it, what if I could see it at the cinema? Another really great review, Ruth, but my opinion on Rupert Friend is slightly different: he didn't quite "catch" my attention, leaving me rather indifferent, instead. I posted about Young Victoria some time ago. Thanks for sharing.

Nice review! Can't wait to see it! I have always been interested in this true life love story!

Every movie and tv show that you post on here I love or want to see LOL! We have the same great taste! I CANNOT wait to see this! Thanks for sharing!

@heidenkind - Well, those At the Movies people clearly don't know what they're talking about. *wink*

@Maria - Oh, the spectacle of the costumes and palace settings was a glorious thing to see on the big screen! I can't believe the movie came out in England almost a year ago yet still hasn't been released in Italy! I'll have to look up your review of the movie. I think Rupert Friend has a lot of potential, but for me he's definitely got to be choosing the right vehicles for it...

@phylly3 - Thank you so much for stopping by & commenting! Hope you get to see the movie soon!

@Renee - I agree, I think we do share rather similar tastes, LOL! Hope you get to see the movie soon!

Ruth, I have to agree this was a great role for Rupert Friend. You are also right that he has to choose the right role...remember when we wanted to see Cheri but it never showed here? I rented it and it was horrible. The movie just dragged on and never went anywhere...so disappointing!

So Cheri was a disappointment, hmm? I'd wondered about that...very sad. Sounds like one of those roles where Rupert was cast for his looks. *sigh*

I think it was part an issue with script and direction but I also think Rupert and Michelle Pfieffer didn't have quite enough chemistry to overcome those issues. Very sad b/c I had hoped for more.

Well, here's to hoping that Rupert Friend's next projects include some gems like The Young Victoria. I like when he shows his mature hero side. :)

Well I've finally seen this movie and I agree completely with your notes on it, Ruth. Particularly about Rupert Friend. I'd seen Friend in two other roles, P&P and a nice quiet movie called Mrs. Palfrey at the Claremont (with Joan Plowright, I recommend it), and didn't think he had it in him either. But the role of Albert seems made for his slightly stiff, reserved acting style. He was perfectly convincing as a man of that time and station. It was also great to see Bettany as Melbourne. He's an old favorite of mine. Gosh, did I just write "old." LOL!

@Lori - I'm so happy you've finally gotten to see The Young Victoria & that you enjoyed it too! I seem to remember hearing about the Mrs. Palfrey film, I will have to try and find a copy to check it out. And Paul Bettany is an "old" favorite of mine as well, LOL!