Review: Silent on the Moor by Deanna Raybourn 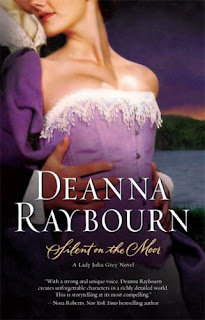 Despite his admonitions to stay away, Lady Julia arrives in Yorkshire to find Brisbane as remote and maddeningly attractive as ever. Cloistered together, they share the moldering house with the proud but impoverished remnants of an ancient family: the sort that keeps their bloodline pure and their secrets close. Lady Allenby and her daughters, dependent upon Brisbane and devastated by their fall in society, seem adrift on the moor winds, powerless to change their fortunes. But poison does not discriminate between the classes…

A mystery unfolds from the rotten heart of Grimsgrave, one Lady Julia may have to solve alone, as Brisbane appears inextricably tangled in its heinous twists and turns. But blood will out, and before spring touches the craggy northern landscape, Lady Julia will have uncovered a long-buried legacy of malevolence and evil.

How is it possible that Deanna Raybourn’s third Julia Grey novel is even better and more thoroughly enjoyable than the first two in the series? The mind boggles at the possibility, but it’s true – in my book Raybourn has achieved the rare feat of crafting characters and stories so engaging that each installment is more enthralling and satisfying than the last. Where the second book in the series, Silent in the Sanctuary, gave readers a more self-assured Lady Julia, now more than ever she wants and isn’t afraid to flout every convention society holds dear in order to live life on her own terms. Having reached the tipping point in her maddening on again, off again romance with Nicholas Brisbane, Julia decides to take matters into her own hands and force a resolution or walk away from him forever. Accompanied by siblings Portia and Valerius, she descends on Brisbane’s newly-acquired estate, appalled to find Grimsgrave in disrepair, the house occupied by the mysterious Allenby ladies with ties to Brisbane’s past, and Brisbane himself shockingly cold towards her. Never one to take no for an answer, Julia settles in for the duration, determined to break through the barriers Brisbane’s installed around his heart. What she doesn’t bargain on is the revelation of Nicholas's painful past, coupled with the discovery of horrifying secrets Grimsgrave manor has sheltered for years.

The biggest draw of this series isn’t the mysteries themselves (though I do think those have improved with each successive book), but Raybourn’s unique and engaging characters. It’s been so much fun to watch Julia embrace her unorthodox March family heritage, and grow into an independent, unconventional, wickedly funny and sarcastic heroine. That would perhaps be enough, but Julia’s wonderfully realized family of eccentrics and rebels tips the scales in the character development department from excellent to brilliant. Julia’s relationships with the various members of the March clan play a big role in what makes visiting her world so much fun, and such a sheer joy to read about. Perhaps the most exciting aspect of this third Julia Grey novel is that finally, at long last, Raybourn gives us some answers regarding the frustrating yet ever-appealing Nicholas Brisbane’s past. Brisbane's past has always been closely guarded, shrouded in secrecy, but with Julia more determined than ever to break down his defenses we finally get to learn the man's secrets. It's a mark of just how much I love these characters that learning their secrets doesn't make them any less interesting - rather, all the revelations about Nicholas's character make me love him and his relationship with Julia all the more.

The atmosphere of the moor is the perfect setting for a story where long buried family secrets come to light and isolation fosters insane schemes for revenge. The setting seems to owe much inspiration to stories like The Hound of the Baskervilles and most especially, Wuthering Heights (some villagers are even named Earnshaw – loved that!). The mood and the long-festering revenge schemes all put one in mind of Ms. Bronte, only with Raybourn’s own unique and colorful spin. Her books have proven to be highly addictive; the only downside to this is that one tends to read them far too quickly. I find myself wanting to savor my time with Julia and Nicholas and the friends that people their world – but I fly through the pages of Raybourn’s novels at lightspeed (there’s worse problems, right? *wink*). Nicholas and Julia's story has been one of the best romances I've read in recent memory, each scene positively crackling with romantic tension. I only hope this isn't the end of Nicholas and Julia's adventures, as they're one of the most fascinating - and fun - pair of detectives you'd ever hope to come across. Ms. Raybourn's next book release can't come soon enough to suit me!

Click to read my reviews of the first two Julia Grey novels: Silent in the Grave and Silent in the Sanctuary. Oh, and in case you were wondering – after reading this installment of Nicholas and Julia’s romance, the verdict is in – Toby Stephens IS Brisbane in my book, hands down. Now we just need to get the BBC behind the idea of adapting these wonderfully entertaining books... :)
Posted by Unknown at 3:34 PM

Hi Ruth, Killer cover! I foresee a Books-a-Million stampede:) Great post as usual. This has nothing to do with Julia Grey though I have read Silent in the Grave. This is to lament the fact that my local video store here in the big woods has never heard of Jeremy Brett/Sherlock Holmes!! Can you imagine? Couldn't wait for you to share my shock:)So alas, will have to wait for the new Holmes. But then there's always Amazon!

@Laura - Oh, I hope you get to read Sanctuary & Moor sometime soon. I have absolutely DEVOURED this series. I left a comment on Deanna Raybourn's Facebook page letting her know, and she responded that a 4th Julia Grey novel is coming out in October. I am SOOOO happy about this!

On a sadder note, I am so bummed about the lack of Jeremy Brett/Holmes availability in your area. That's tragic. :-/ There's always Netflix and Amazon, right? :) If you ever feel like indulging in a random DVD purchase, I have to recommend this volume: http://www.amazon.com/Adventures-Sherlock-Holmes-Scandal-Solitary/dp/0788602047/ref=sr_1_3?ie=UTF8&s=dvd&qid=1262919990&sr=1-3

Those four eps are classics!

Hi, Ruth -- Just discovered your blog today; I adore Deanna Raybourn's books. As a matter of fact, I just posted on my blog yesterday that she was having an online chat last night. The fourth book is Dark Road to Darjeeling.

Come on over to my blog anytime and visit and let's talk books!

@Joanne - So glad you found my blog, and thanks for the comment! It's great to meet another Raybourn fan. :) I cannot wait to read the upcoming 4th Julia/Brisbane book!