Robin Hood 3.12: Something Worth Fighting For, part 1 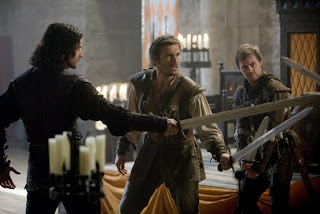 Well...I'm sure no one has noticed that I never got around to blogging about the conclusion - of season 3 and the show itself - of Robin Hood. However, because I am a COMPLETIST (*grin*) and the DVDs of season 3 just released on Tuesday, I thought I'd finally get around to checking this item off the blogging to-do list. This season was so hit-or-miss it was rather hard to get up the motivation, so it was extra easy for me to be distracted by the holidays.

Anyway - the last time I blogged about my favorite outlaws, Guy (Richard Armitage) and Robin (Jonas Armstrong) had reached a somewhat uneasy truce, bonded over the knowledge that Guy's mother and Robin's father had an affair that resulted in a heretofore unknown brother, the oh-so-conveniently named Archer (Clive Standen). Considering that the announcement of the show's cancellation was made after the season finished airing in the UK, but before it began on BBC America, it's even easier than it should be to recognize Archer as the heir apparent to the lead of the show, a cocky, self-assured mash-up of Robin and Guy's personalities. While I think the showrunners/scriptwriters completely killed this show due to lack of focus, lack of a plan, Clive Standen is enough of an Errol Flynn clone that I would've definitely continued to watch the show should it have produced a fourth season. Oh well, perhaps Clive will move on to more interesting roles (there was a rumor that he was in the running to star in the fourth Pirates film).

Let me back up for a second - so, the basic set up for this storyline is that King Richard (who was LAME, if you've seen the season 2 finale) is "supposedly" returning to England, and Prince John & his minions are planning a hostile takeover. Robin and Guy decide that they must take Nottingham Castle and imprison Sheriff Isabella (Lara Pulver). This is make it or break it time for Isabella, as she realizes if she doesn't deliver the men Prince John needs for his army he'll dispose of her as easily as he does all of his other enemies. In and of itself this isn't an awful set up for a climatic battle, (can you sense the "but" coming? LOL) BUT there's a few missed opportunties here in my view.

One: the return of Kate's (Joanne Froggatt) mother. Isabella blackmails her into tricking Kate that Robin still loves her. Kate, because she's an IDIOT, falls for it. And the fact that Kate's mother has suddenly, out of the blue lost all of her anti-Robin bias just adds insult to injury. I mean she hugged Robin in order to plant Isabella's evidence on him - and he didn't think that was freaky and insincere? Of course I should just acknowledge Robin's legendary stupidity about women, but this my friends is a new low. Also, for as much as I like Clive Standen because of his uncanny ability to channel Errol Flynn, his character arc here is quite dicey, even by this show's standards. Episode 11 did a fine job of establishing that Archer has a real mercenary streak, but since he's Robin's half brother, of course there's a heart of gold buried in there somewhere, right? :) So that makes his about-face in this episode a little puzzling. He goes from working for Isabella to turning outlaw as soon as he sees Kate willing to die for her principles (typing that last bit made me gag just a little, I can't lie). What is with the men on this show and KATE?! It's so WRONG!! Talking about Kate reminds me of another thing that bugged me about this episode - Tuck (David Harewood). How annoyingly sanctimonious can a character get, yeesh! His bright idea is having a sit-in with the men of the village to stop Isabella's supply train to Prince John from leaving the castle - a SIT-IN?! Seriously?! That was lame. Thankfully it only lasted for about three minutes.

One of my all-time favorite characters on the show bites the dust in this episode - Allan (Joe Armstrong), who was criminally under-used this season. There was a time, mind you, when Allan's death would've positively devastated me. But this season has been such a roller coaster of highs and lows that I really didn't care. The only thing that did bother me, though, is that he had to die all on his own, after Robin and his band of fickle men accept some rumor that he was working with Isabella, rather than pay attention to the fact that he'd been suffering through all of season 3 living in the woods with the gang. Would he do that if he was a double agent? I think not, just sayin'...Allan, you deserved a better end, methinks.

I realize this post is mostly a gripfest, but I figure the show's canceled, I might as well blow off some steam about how frustrating it's been to watch one of my all-time favorite shows just fizzle out. Not that this season has been all bad (see episode 9), but overall it's ended up more about missed opportunities than what I would've preferred. However, I'll end this episode commentary by reiterating what a dream come true it's been for Guy to finally, finally see the proverbial light and work with Robin instead of against him. Oh, what this show could've been if they'd made Richard Armitage the new lead. What a dream come true that would've been! *sigh* :)

I did not read this post due to me never watching the show! Ah, I know right?! lol. I have netflixed it though and am going to watch season 1 tonight! Yay :-) Love your blog.

I love RH and your reviews, of course, Ruth. Though my favourite RH series was the second there were some good moments in the third too.
BTW, I've linked this review to my latest post.
http://flyhigh-by-learnonline.blogspot.com/2010/01/what-are-you-looking-for-ra-unusual-ra.html
Have a nice weekend!
MG

@Marcia - Thanks! My favorite RH season was 2 as well. Though 3 had moments sprinkled throughout that reminded me of why I loved the show. :)