Robin Hood 3.13: Something Worth Fighting For, part two 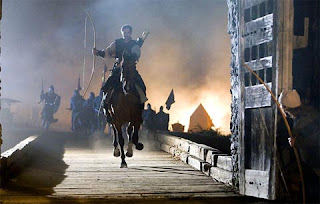 I honestly meant to get a post up on the Robin Hood finale Thursday or Friday, but I thought I was getting sick, and what with one thing or another it never happened. Where the first half of "Something Worth Fighting For" reminded me of many of the reasons I've been frustrated by the direction the show took in season 3, part two reminded me of everything I've ever loved about Robin Hood. It made me positively nostalgic, and I have to admit, I cried a bit at the end.

I neglected to mention in my previous post that we saw the return of the Sheriff - the real Sheriff, the supposed-to-be-dead Sheriff that all fans of the show know and love (played by Keith Allen). It's tempting to complain about the fact that Sheriff Vaisey disappeared for six episodes, with no logical explanation for why he faked his death or how he's managed to raise an army, with no one around Nottingham getting wind of the fact that he was alive. Speaking of the army thing - how did no one notice Vaisey & crew hauling freaking trebuchets across the countryside? Seriously, I would think it would be kind of hard to sneak up on someone with that kind of weaponry in tow. Anyway, seeing Allen back on-screen was a good reminder of the fact that no matter how interesting (or not, depending on your point of view) Isabella's (Lara Pulver) presence shook up Guy and Robin, she pales in comparison to the real Sheriff as the show's central baddie.

Guy (Richard Armitage) and Robin (Jonas Armstrong) made this episode, and as far as endings go, and as wrenching as it was to witness, I have to admit that the two one-time enemies ended very well, all things considered. Let's talk about Guy first, shall we? :) My hope for Guy's character, from season 1, was that he'd discover his inner good guy and turn heroic (and when Armstrong announced he was leaving the show, I wanted Richard Armitage to take over the lead!). But considering my dearly hoped-for dream scenario was not meant to be, I've got to give Armitage credit for once again taking Guy's scenes to a whole new level of emotional insight. It would've been so easy for Guy to abandon the beseiged outlaws, but instead he recognizes the fight as his moment to work towards redeeming the direction his life had taken thus far. He even has a moment of twisted brotherly consideration for Isabella, providing her with poison so she can kill herself before those she's wronged would try to harm her (that doesn't work out so well). The final confrontation, resulting in Guy's brilliantly played death scene, was fantastic because it was so focused on the principle players, especially Guy, Robin, and the Sheriff, since they are three of the main reasons the show worked as well as it did. If Guy had to die during this show's run, I'm glad he died as he did - fighting whole-heartedly for Robin & the people. And his last words, about losing the love of his life, but dying a free man - very classy Guy, and well played as always, Richard. :)

This final hour was also a fantastic send-off for Robin. The show has really come full circle, from the first episode in the courtyard where Robin stood alone against the Sheriff, to this finale where he's once again fighting the Sheriff, only this time he's surrounded by the people he's sacrificed so much to protect. It's LONG past due, but Robin & crew finally, finally get to see some action out of the villagers. Thankfully, even before he was poisoned, Robin really backed off his interaction with Kate (Joanne Froggatt). Words cannot describe how glad I am that Armstrong's last episode as Robin wasn't too polluted by Kate's presence. Robin's final conversation with Guy provided a bit of a reset for his romantic life, a reminder that there was only one woman for Robin. Speaking of Marian (Lucy Griffiths), part of me can't believe that the showrunners went for the whole "vision-of-beloved-dead-character" returns angle, but after the whole Kate debacle I was just relieved to see Marian again. She's completely forgiven for all of her too stupid to live moments during season 2. Armstrong and Griffiths at least had actual chemistry and affection for each other in their scenes, and their last moment together is even more poignant considering the show was ultimately not renewed. 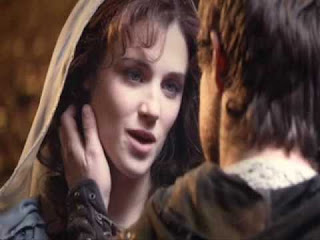 Little John (Gordon Kennedy) and Much (Sam Troughton) both get some nice scenes in this episode. Little John gets to show off his strength in the tunnels, which is more than Kennedy's gotten to do for much of this season. And Much finally shows that he can operate outside Robin's shadow. He acts like a warrior instead of a mouse for once, and we finally get to see that there's a reason he survived the Crusades - he can actually fight effectively. That type of scene was LONG overdue. I have a sneaking suspicion that Kate would've turned into a love interest for Archer (Clive Standen) in season 4, but the final look she exchanges with Much makes me hope that the showrunners would've developed the Much/Kate angle. I think I could've stood that. :)

As far as Archer goes, I really am rather sorry that we didn't get to see more of Clive Standen. He fits the swashbuckling nature of the role probably better than Armstrong and yes, even Armitage, could. Archer would have proven a charismatic and capable leader, methinks. With the deaths of much of the original cast, and a nod to the actual historical timeline (Richard has been captured by Leopold of Austria, leaving the outlaws on their own a bit longer), the show was perfectly prepped for a fresh beginning. As much a I hate to say it, the show could've had a decent future beyond the departures of Robin, Guy, the Sheriff, and Isabella. But at least it's not a completely depressing ending for the show - Robin's battle against the Sheriff and fantastic reconciliation with Guy were just one chapter in the outlaws' story. And this chapter, all things considered, gave the characters I've grown to love over the last three years an ending I'm pleased with. Long live the outlaws!
Posted by Unknown at 4:30 PM

Great review! :) What I liked about it was that it felt like such a natural ending to the whole show, and to renew it after that would've been a joke. The main protagonists and antagonists all dead? Anything coming afterwards would've just been a lousy spin-off. They blew up Nottingham as well, so it felt as if everything ended, the show came to a natural conclusion. You still had the sense of things carrying on (with the rest of the outlaws still fighting), so you knew they were carrying on what they started with Robin, but to see them do it without Robin, Marian, the Sheriff and Guy? Ick no. (Robin Hood without three of the pivotal characters from the legend? A clue: No! ;)) I was quite relieved to hear the show wasn't renewed for a 4th season! Let Robin and the others rest in peace.

This finale was so compelling and touching. But I can't say I was pleased with the end the writers designed for Guy. He was killed by his treacherous sister and his disrespectful former master without really fighting. His last words are unforgettable and moving, of course, but ... I've written about this last episode after watching it at
http://flyhigh-by-learnonline.blogspot.com/2009/06/i-lived-in-shame-but-thanks-to-you-i.html

@Traxy - I agree. The last episode felt like more of a natural ending for the show than I ever would've expected.

@Maria - I totally get where you're coming from. However - as much as I hate that his sister & the Sheriff got the best of him in the end, in a way it was fitting. After all he'd done, even though he'd changed, how long could he continue to call the shots & dodge the consequences of his past actions. So tragic, poor Guy!

I have been doing a Season 3 rewatch myself now that the dvds have been released. I have the last 2 episodes left and haven't been too excited to see them. It's such a bittersweet ending! A lot of things I liked about it, yet several things (as you put so well) that were just down right annoying. However, reading your reviews of part 1 and 2 have made me feel like they'll be less of an obligation to watch. :)
If season 4 had gone through, I really hope Kate would've ended up with Much rather than Archer! That poor guy needed a break... and Archer needed his own Marian, which is definitely not Kate! :)

@Nat - I completely agree with you about a potential season 4 - Kate DEFINITELY needed to end up with Much. He "grew up" alot just over the course of the last 2 episodes! She really needed to give him a chance!! And Archer deserved WAY better than Kate, he needed a classier, less prone to be annoying love interest. :)

I need to catch up on your blog, I'll be interested to read your perspective - part 2 is so much more worthwhile IMO than part 1 of this finale, but bittersweet as you say.

I skipped over all your Robin Hood season 3 reviews since I hadn't watched the season yet (except for the first two episodes - Kate annoyed me so much with her first one that I stopped watching). But I just discovered the show was on instant play on Netflix, and with the December show lull I had time to watch it. And of course I looked up your old posts and read your reviews after I finished each episode. :)

Must admit, I cried a little at the end too! Mostly when Robin was saying goodbye to Much. I'm glad they ended it, though. Would have been too weird continuing with only two members of the original cast remaining.

@Katie - Hey, thanks for going back and checking out my reviews!! I love knowing that someone did that! :) Kate really played a huge role in killing this show, didn't she? *sigh* Glad to know you too were moved to shed a little tear as the show ended - for all season 3's ups and downs, occasionally they did a great job reminding one of how good the show could be.