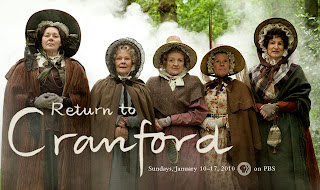 My intention to blog about the return of Masterpiece Classic in a timely fashion went up in smoke (obviously). Blame the long-awaited (and awesome) return of Chuck and 24 on the last two Sundays. But I do intend to catch up. :) Here's the brief synopsis of episode one of Return to Cranford from the Masterpiece website:

New life is charmingly apparent in Cranford as Matty Jenkyns enjoys sharing her home with Tilly, the daughter of her maid Martha and carpenter Jem Hearne. Familiar faces including Miss Pole, Mrs. Forrester and Mrs. Jamieson surround Miss Matty in a loving community.

Some new faces have arrived as well — Mrs. Bell, her daughter Peggy and son Edward. Mr. Buxton and his son William have returned to town after years away. Young William eagerly aspires to be an engineer, while his father is grieving the loss of his wife.

The railway has crept closer to Cranford, but has been halted several miles outside the village. For it to move any further, Lady Ludlow would have to sell part of her land. Captain Brown is determined to make progress for the railway, but meets resistance from the village residents.

An unexpected and alarming shift signals yet more change in store for Cranford. Can Matty and the women of Cranford muster support for what inevitably awaits?

The original Cranford was a stand-out miniseries for the way in which it documented and relished the triumphs and tragedies of everyday life. Unlike many shows that keep characters around forever, for fear of losing an audience, no one is "safe" in Cranford, because changed, partings, and death are as much a constant of life as births, marriages, and the promise of new beginnings.

The heart of Cranford is Miss Matty Jenkyns, wonderfully played by Judi Dench, and her close circle of friends - Mrs. Jamieson (Barbara Flynn), Mrs. Forrester (Julia McKenzie), Miss Pole (Imelda Staunton), and Miss Tomkinson (Deborah Findlay). These women hold the traditions of village life near and dear to their hearts, but when Cranford is "threatened" by change - in the form of the highly contentious railway plans seen in the first series - they must decide if the bonds of friendship and the values forged in Cranford can survive the progress of industry that's changing the country.

This installment of Cranford contains a good balance of beloved, familiar characters (see above) and several new faces for the women of Cranford to interact with in their own special ways. I absolutely loved seeing Miss Matty play grandmother to her beloved maid Martha's (Claudie Blakley) first child. After all the heartbreak Miss Matty endured in the first series of Cranford, it's wonderful to see her so happy - for a while, anyway. Because it seems that in Cranford, happiness is all to often tempered with a healthy dose of heartbreak. The scene when Martha passes away giving birth to her stillborn second child absolutely broke my heart. And witnessing the women of the village come together to prepare her body for burial brought tears to my eyes. I was reminded of my grandmothers, and others, who over the course of their lives have lost so many who were near and dear to them - and I wonder and marvel at the strength they found to keep going. That's just one of the reasons I think Cranford is such a powerful little show, because it taps into the tried-and-true emotions and experiences of life that are timeless. Everything changes, yet some things stay the same, you know?

Another familiar face to Cranford fans is Lady Ludlow, played with an icy strength and dignity by the marvelous Francesca Annis. Can I just tell you, I had no idea Annis could play someone at death's door quite so well. The great tragedy of Lady Ludlow's character was always her refusal to see that her son, Septimus (Rory Kinnear) was such a freaking loser. All things considered, it's probably best she passed away before he returned to wreck her estate. Septimus's selfishness has grave ramifications for another favorite character - young Harry Gregson (Alex Etel), who benefited from the mentorship and generosity of Lady Ludlow's now-deceased estate manager. Harry's innocence and sense of responsibility towards Cranford and his inheritance makes him an easy mark for Septimus's machinations, and he stands to lose most of his promised inheritance unless his only advocate, Miss Galindo (Emma Fielding) can help. Whether or not they will be successful remains to be seen.

The romantic in me loved the Cinderella-esque romance that blooms between newcomers William Buxton, an aspiring engineer played by Tom Hiddleston, and Peggy Bell, played by Jodie Wittaker, who is constantly dumped on by her needy, controlling mother and pretentious brother. Hiddleston is a Masterpiece veteran, having played in Miss Austen Regrets and the Wallander mystery series, as the character Martinsson. I can't decide if I like him because he's a good actor, or because he's a dead ringer for an old favorite of mine - Sam West. *wink* I'm loving watching their romance play out.

I was quite pleased to see the return of Miss Matty's dear friend Mary Smith (Lisa Dillon). Mary's now engaged to some guy who owns a button factory, apparently. What I love about her character is that she's a sort of bridge between the past, and the traditions Miss Matty and her generation hold dear, and the future. It's Mary's support that helps Miss Matty muster the courage to reconsider her point of view on the advisability of the railroad entering the idyllic Cranford. I also loved little touches like seeing the return of Mrs. Forrester's pajama-wearing cow (Julia McKenzie's humor in this role is wonderful to see all the way around). Imelda Staunton is also absolutely hilarious as the gossipy, somewhat pretentious Miss Pole, especially once she acquires a rather exotic pet. :) There are also a few other familiar faces that I won't go into detail about here. This show is quite literally bursting at the seams with wonderful characters and interwoven storylines.

My review of part two will be coming shortly. So, if you watched Return to Cranford, did you enjoy it? Do you prefer the previous miniseries to this one? Chime in with your thoughts in the comments! :)
Posted by Unknown at 9:44 AM

Oh you love Chuck too!?! My husband and I have been anxiously awaiting its return. Chuck is AWESOME :) I have Cranford recorded on my DVR and just started watching it today...it looks good so far!

I enjoyed "Return to Cranford" but I prefer the original to the sequel. RtC seems a bit rushed because they fit so much into 2 episodes. I was left thinking, "What about so-and-so?" I didn't care for the "all the sudden in love" thing between William and Peggy in the first part, but the second part made up for it and I loved their challenged romance. My favorite character is Miss Poll whose facial expressions are hilarious! Martha's death broke my heart too... I was like, "Why!?" It reminded me of the shock I felt when Allan was killed out of the blue in RH because I didn't expect Martha to go. In general I did like RtC because you can't beat that cast or a good period drama!

It is a good period drama, happily crowded of wonderful actors that make their best. I can say I loved it as much as the first series. Thanks for this detailed and very personal review.
Have a nice weekend, Ruth!

@Muse - Oh my, yes I do love Chuck! I thought this past week's episode (#4) was just fantastic! Glad you are enjoying Cranford so far!

@Nat - I can totally see myself getting slightly bugged by the "rushed" feel of RTC, just because of time constraints. But all things considered, and despite the absence of some characters I loved in the original, I'm pretty please thus far with how the BBC continued the story. And I agree with you - no matter what I may quibble about in a period drama, they can't be beat for entertainment value!

@Maria - Thank you! Hope you have a great weekend as well!