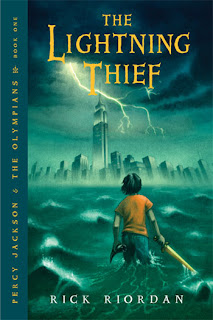 Percy Jackson is about to be kicked out of boarding school…again. And that’s the least of his troubles. Lately, mythological monsters and the gods of Mount Olympus seem to be walking straight out of the pages of Percy’s Greek mythology textbook and into his life. And worse, he’s angered a few of them. Zeus’s master lightning bolt has been stolen, and Percy is the prime suspect.

Now Percy and his friends have just ten days to find and return Zeus’s stolen property and bring peace to warring Mount Olympus. But to succeed on his quest, Percy will have to do more than catch the true thief: he must come to terms with the father who abandoned him; solve the riddle of the Oracle, which warns him of betrayal by a friend; and unravel a treachery more powerful than the gods themselves.

Once upon a time, I used to love reading the myths detailing the adventures of the Greek and Roman gods and goddesses, and the exploits of heroes like Perseus and Theseus. Rick Riordan takes a unique approach to the old stories by updating the legends and placing them squarely in 21st-century America with his Percy Jackson & the Olympians series. The new Olympus (found by taking the elevator to the 600th floor of the Empire State Building, no less) relocated to America because the gods and goddesses, birthed in ancient Greece, the “cradle of Western Civilization,” must follow those ideals and principles wherever they exist the strongest in the world.

The Lightning Thief is the closest book I’ve read that’s come to capturing the charm, humor, and unbridled creativity found within the Harry Potter series. Comparisons are inevitable, and Riordan’s hero, Percy Jackson, owes much to Harry Potter. Both story arcs involve a troubled orphan discovering his magical heritage (wizard/half-blood son of a god), who goes to a special school (Hogwarts/half-blood summer camp), acquires some friends (a brainy, plucky girl and a loyal, but somewhat goofy best friend), and must save his world from destruction. But what sets Percy’s adventures apart is his voice, replete with a wry sense of humor and a healthy dash of sarcasm, and the way Riordan has placed age-old figures like Zeus and Poseidon in the modern-day world. Seeing the way the mythology now functions in a world of television, cell phones, and all other modern conveniences is hilarious and wildly entertaining. Mortals are blinded to the activities of the gods around them, making for some alternately funny and dangerous misunderstandings. It’s wildly funny but appropriate that Ares, the god of war, would masquerade as a threatening biker in California, and that Cerberus, the threatening three-headed dog guarding the entrance to the Underworld, would respond so well to modern-day obedience school techniques, just to name a few of the modern and ancient world mash-ups. Touches like these set The Lightning Thief apart, because the total integration of the real and mythological worlds is so fully-realized.

The Lightning Thief is an excellent first chapter in Percy’s quest to become a hero worthy of his noble paternal heritage. I loved seeing the way Riordan made the mythological and modern-day worlds collide, like when one of the Furies masquerades as a math teacher or Percy’s sword is disguised as a ballpoint pen. Camp Half-Blood, where the children of the gods get their training (if they survive monster attacks to adolescence), is a fun little microcosm of what makes this story work. The modern attitudes of all the kids, and how they each express different traits inherited from their immortal parent (and constantly clash with each other) puts a really fun spin on the school/camp angle. Percy’s first quest is action-packed from start to finish, and the novel has this perfect balance of humor and intensity that makes it a real page-turner. There are some well-planted hints of the overall threat Percy will surely face by the end of the series, and like the Potter books I suspect each installment will take Percy one step closer to realizing his potential as a full-fledged hero. I’m definitely looking forward to reading the next installment in Percy’s adventures.
Posted by Unknown at 4:17 PM

@Liv - It was a very fun read! Though let me tell you, having finished this book I watched the movie trailer again, and boy does it look like they've rewritten and rearranged the story! Craziness!!

Hi, Ruth -- My daughter just ate this series up! She adored each and every book -- looks like I should give one a try. (sigh) So many books, so little time.....

Have you read The Oracle at (of?) Delphi by Victoria Laurie? That's also a middle-grade book that takes ancient legends and infuses them with post-WWII-era setting. I thought it was pretty good.

Thank you for the review, Ruth! I was just thinking, "I need to find a new entertaining series to read." I became interested in these books after finding out the movie is coming out soon, but your review sealed the deal and I will have to check them out.

If you like children's fantasy novels, such as HP (a good book is a good book, despite the age target, in my opinion) then you should look into the "Fablehaven" series. I love it! More simple than HP, but entertaining.

@Nat - I wanted to read this series after hearing about the movie as well. I'm almost halfway through book 2, and am loving it just as much as the 1st. However, based on the trailer it looks like the movie supplies plenty of rewrites (oh, Hollywood...). :)

I've never heard of the Fablehaven series, I'll have to keep an eye out for it. And I completely agree, a good book is a good book, no matter what the target age.

@heidenkind - Thanks for that book recommendation, I'm intrigued!