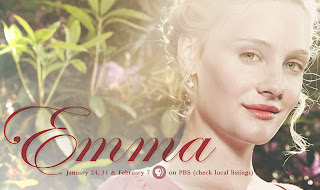 This new adaptation of Jane Austen's Emma is, by many, the most anticipated title of the 2010 Masterpiece Classics season. Packed with well-known British acting talent, and with a script by Sandy Welch (who also adapted North & South and Jane Eyre), this new Emma has lots of potential - and I, for one, did not come away disappointed. :) Here's the summary of episode 1 from the PBS website:

Rich, independent and kind spirited, Emma Woodhouse has no interest in marriage herself, but is inspired by matchmaking for those around her. Once she has married off her close companions, she settles on the pretty Harriet Smith to fashion into her new playmate and ally. She persuades Harriet that she is too good for her suitor, the farmer Robert Martin, and encourages her to set her sights higher. But close family friend Mr. Knightley warns Emma that her meddling will cause great pain. Undaunted, Emma continues her efforts on Harriet's behalf.

Meanwhile, Emma is intrigued by the mysterious and elusive Frank Churchill, whom she hopes to meet at a party. Frank does not arrive, but instead Emma becomes the subject of unwanted attention from the vicar, Mr. Elton.

A few weeks later, village gossip focuses on the arrival of young Jane Fairfax and a large piano that she has been sent by a mystery admirer. Emma refuses to believe that Mr. Knightley could be the secret admirer.

When I heard another version of Emma was in the works, I confess to feeling less than excited - after all, Emma has been done many times before, and done well (I'm referring to the Gwyneth Paltrow and Kate Beckinsale versions). However, with a runtime of nearly four hours, we're happily treated to much more expansive treatment of Austen's story. The first portion of this miniseries opens with a prologue revealing the childhood of three of the principle players - Emma, Jane Fairfax, and Frank Churchill - and how the events that occurred during their respective childhoods set each person on the path towards becoming the character seen in the novel.

Of course the star of the piece is Emma and all her machinations, played here by Romola Garai. I've been a fan of Garai's work since she played Gwendolen Harleth in Daniel Deronda. She just looks like an Emma, know what I mean? Garai's got the looks, personality, and vivaciousness to pull off the role, and her performance is full of energy and life. I liked the way this presentation balances Emma's busybody qualities with quieter moments, little hints of self-reflection that make you think that perhaps Emma is not quite as self-satisfied and assured as she would like the world to believe. She's a bit more sympathetically portrayed than she has been in previous films, methinks.

Michael Gambon plays Mr. Woodhouse, Emma's father, and I think his take on the character has got to be the finest that I've ever seen. Mr. Woodhouse is such a fussy, needy character that it's easy for him to be portrayed strictly as comic relief. Here, Mr. Woodhouse is fussy and needy and constantly worried, but Gambon's performance adds some depth and real, almost tragic poignancy to the role. I also enjoyed seeing the interaction between Mr. Woodhouse and Emma, who I've always thought was a rather surprising caretaker. Garai's Emma may get a bit frustrated with her father, but her genuine regard and care for her anxiety-prone parent is abundantly apparent. Emma's never quite so self-absorbed that she loses patience with her father, and perhaps that is Austen's hidden saving grace that she imbued such duty and regard in a character she described as a "heroine whom no one but myself will much like."

I was quite pleased to see Jodhi May again, playing Emma's beloved Miss Taylor, her greatest matchmaking "success." May is probably best known for her performance as Alice Munro in The Last of the Mohicans, but she also made noteworthy appearances in films like Daniel Deronda and Defiance. Her quiet and elegant screen presence is the perfect foil to balance out Emma's energy and feverish matchmaking schemes. Blake Ritson is ideally cast as the pretentious curate, Mr. Elton. No stranger to Masterpiece viewers, he played Edmund in the 2007 version of Mansfield Park (a production that left MUCH to be desired, LOL) and one of the prisoners in the supberb film God on Trial. Ritson has this remote, aloof presence that's well suited to play a curate with aspirations to marry very, very well. The scene between Elton and Emma when he proposes, and all her schemes for marrying him and Harriet, is really quite funny. Another familiar face plays Highbury's most mysterious bachelor, Frank Churchill - actor Rupert Evans. Evans played Frederick Hale in the absolutely fantastic North & South, and Zander in ShakespeaRe-Told's modern take on A Midsummer Night's Dream. He's got the looks and personality in spades to carry off the rakish Frank Churchill role, and it's abundantly easy to see how Emma so quickly falls under his spell. :)

Now I've saved my favorite part for last - Jonny Lee Miller as Mr. Knightley. :) I absolutely fell in love with Miller after seeing his take on the character of Edmund Bertram in the much-debated 1999 version of Mansfield Park. I for one love that movie, and the last five minutes or so - sheer romantic heaven. :) Anyway, I don't think one can argue that it beats the 2007 version of Mansfield by a mile. Miller's casting was the first thing to really interest me in this production of Emma, and thankfully so far he's not disappointed me. This production of Emma really plays up the sparring between Knightley and Emma, and in this episode, during their scenes together, the sparks really fly. As much as I love Jeremy Northam and Mark Strong's takes on the Knightley character, I've got to say Miller probably gives the most intense, energetic performance of the three. I think one gets a better sense of Knightley's battle over his feelings for Emma and frustrations with her superficial pasttimes. This Knightley clearly not only wants better for Emma because he's known her basically since birth, but because he believes in her potential - and he also struggles with his attraction to her. And I'm all for more romantic tension, don't you know. :)

This epsiode of ends when Emma is faced with the horrifying realization that Mr. Knightley may have romantic intentions towards Jane Fairfax - and that would be an incomprehensible reality. So far I'm thoroughly pleased with the pacing, scripting, and acting that fills this latest adaptation of Emma. Definitely looking forward to seeing how the rest of this version unfolds. So, what did everyone else think? Part two airs Sunday night! :)

I'm not reading this review because I haven't read the book yet. But I wanted to suggest you check out http://community.livejournal.com/essentialbooks (I hope I typed that right). I'm starting a review site there. :) Just casual. I am probably posting my first "review" there tonight or so (it'll be Jane Eyre). Just in case you're interested.

So, Ruth, you are allready in love with my Mr Knightley? It took me longer, actually. I started "noticing" him at the ball (episode 3) then I totally fell for him. Thanks for your detailed and very personal review. Enjoy tonight episode!

@Jamie - Thanks for commenting, and get to reading Emma! j/k Thanks for the link, I will check it out asap - Jane Eyre is one of my favorites.

I'll get this via Netflix in a couple of weeks. I'm a fan of Garai (mainly from Amazing Grace) and Jodhi May (I've seen her in LOTM, DD, and A Clear Day). Enjoyed your review, and am looking forward to it even more.

I really liked your review of Emma. You have described very well al the characters ands have almost the same impressions I did, especially towards Jonny Lee Miller, my favourite Mr K of all time!

@Lori - I hope you enjoy it! You'll have to come back & share your thoughts when you've had a chance to view it. :)

@mrsthorntondarcy - Thanks for the comment! (Love your name BTW, LOL!) Jonny Lee Miller is definitely this adaptations strongest point, IMO!

It was okay. I didn't like it as much as you did--it felt really long-ish and the beginning was kind of pedantic. I do love Johnny Lee Miller, and when he and Emma start arguing it's very fun and entertaining. I haven't watched this week's installment yet.

@heidenkind - I can kinda relate to what you're saying, because when the show 1st started I had to make a conscious effort to NOT compare it to previous Emmas. The story beats are so, so well known by this point it takes effort (for me, anyway) to not be completely dismissive of yet another version - make sense?

I do think the Emma/Knightley conversations/arguments are some of the strongest scenes - they can be very, very funny. :)

I have been recording MPT and haven't gotten to see Emma yet. But cannot wait to sit down and just take my time with it. Interesting cast!

@Jenny - Oh, I hope you enjoy Emma! I need to get my post about part 2 up asap...maybe talk about some of the new(er) faces in the cast.