Review: Love at Any Cost by Julie Lessman 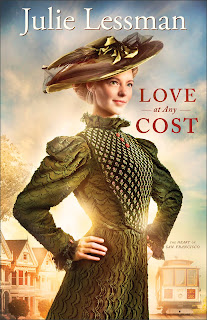 In the summer of 1902, Cassidy McClare packs her bags and heads west from Humble, Texas, to the glittering lights of San Francisco, hoping a summer with her beloved aunt and cousins will help her forget the man who jilted her when her father's oil wells ran dry, and the family fortunes disappeared along with the once-plentiful liquid gold. Determined to forswear men, Cassie decides to focus on her fledgling teaching career and her hopes of obtaining a position in the school her Aunt Cait dreams of opening, serving the poor and disadvantaged women of the Barbary Coast. But the moment Cassie steps off the train, her resolve is tested when she collides head-long into the arms of the most dashing, hazel-eyed rogue she's ever seen.

Jamie MacKenna escaped his Barbary Coast roots through hard work, lucky breaks, and sheer force of will, determined to make a name for himself that will erase the shame of his antecedents and allow him to provide his mother and sister with everything life has denied them -- including a life-changing surgery that promises to correct the debilitating hip injury that keeps her nearly bedridden, an injury Jamie blames himself for allowing to occur.When Jamie collides with the Texas spitfire he's sure all his problems are over -- not only is Cassie beautiful, but as an heiress and cousin of his closest friends, marriage to her would allow him to provide for his family and secure his future. Reluctant to risk her heart, Cassie finds herself hard-pressed to withstand Jamie's ardent pursuit -- but when Jamie learns of her family's reversal of fortunes, he's ill-equipped to deal with the stunning realization that the playboy has lost his hear to the pauper princess. If they have any hope of a happily-ever-after, two wounded, misguided souls will have to trust their hearts and futures to the pen of a God who longs to write a love story for them both beyond their wildest dreams.

Moving from Boston to the glamour of turn-of-the-century San Francisco, where the glittering homes of Nob Hill compete with the squalor of the Barbary Coast, Julie Lessman introduces the McClares, a family every bit as passionate and full of life as the O'Connors who made her name. Cassie McClare is something of an anomaly when compared to her beloved wealthy cousins. I loved Cassie's unique, spitfire qualities, but the over-reliance of "country" vernacular as a means of distinguishing her from her cousins quickly become cloying and repetitive cliches. "Thunderation!," "sweet Texas tea!," "low-down polecat," and "pretty boy this-or-that" quickly move from endowing Cassie with a loveable quirk to frankly annoying and over-used verbal cues by the novel's end. While she's more comfortable in jeans and boots than the corsets and gowns attendant with being a member of the San Francisco elite, she is nevertheless determined to immerse herself in her cousins' world, focusing on her faith and fledgling teaching career instead of "pretty boys" who steal kisses with breathless promises and then break your heart.Despite hailing from the less-than-savory Barbary Coast, Jamie has never encountered a woman as straightforward and determined to withstand his considerable charms as Cassie. And when his pride meets her prejudice, sparks fly from the page!

I love the organic way in which Lessman weaves faith into the storyline -- it's very present while never pedantic, a delicate balance to achieve in fiction of this ilk. Her characters leap from the page with a freshness and vitality that is very contemporary, while managing to remain true to the time period in which the story is set. But what sets Lessman's brand of storytelling apart is the frank honesty with which she approaches matters of faith, passion, and desire. The plot has all the twists and turns of a deliciously soapy drama, but the action is grounded by relatable characters who struggle with trust, faith, and what it means to live as a believer in a refreshingly honest manner, proving the timelessness of Lessman's thesis -- that a love story written by God, with the author inextricably woven throughout the relationship, is the most passionate love affair of all.

Running parallel to Cassie and Jamie's tumultuous story is the that of the widowed Aunt Cait and her brother-in-law, the rakish Logan McClare. Engaged until the revelation that Logan betrayed her with another woman, Cait went on to marry his brother, and following her husband's death determines to honor his memory by continuing his work to clean up the Coast and open a women's school. But when Logan determines to win anew the heart of his youthful love, Cait finds her own resolve sorely tested, and she joins her niece in struggling to cope with feelings for men who have more faith in themselves than their Maker. I love how Lessman always has a storyline involving an older, mature couple in her novels, proving that passion rekindled is every bit as heart-stoppingly swoon-worthy as the travails and triumphs of the younger set. :) Given the revelations about Logan at the end of this novel, I cannot wait to see his and Cait's story continued in the sequel!

While reading Love at Any Cost I couldn't help but think that Jamie's good looks and bravado were reminiscent of Clark Gable's character in one of my favorite classic films, 1936's San Francisco, colliding with a transplanted Doris Day as Calamity Jane, the country girl transformed in the 1953 film of the same name. It's no coincidence that Lessman's novel evokes the glamour of classic Hollywood, as she pens stories with a Technicolor flair and a wholehearted belief in love's transformative power, with one addendum -- that the best love stories are those that stem from a passionately shared faith. Replete with a host of well-drawn characters and a healthy dash of period detail, Love at Any Cost is a thoroughly entertaining, energetic introduction to the McClares, replete with Lessman's sparkling wit and passionate romance. I cannot wait for the next installment!

Cassidy McClare is a spunky Texas oil heiress without a fortune who would just as soon hogtie a man as look at him. Jilted by a fortune hunter, Cassidy travels west hoping a summer visit with her wealthy cousins in San Francisco will help her forget her heartache. But no sooner is she settled into beautiful California than Jamie McKenna, a handsome pauper looking to marry well, captures her heart. Can love prevail when Jamie discovers that Cassidy is poorer than he is? And can Cassidy ever learn to fully trust her heart to a man?

Bestselling author Julie Lessman brings the delectable Gilded Age to life in this sumptuous new series. Join your favorite romantic storyteller as she moves to the hills of San Francisco for more romance, passion, and surprising revelations.

*Thanks to Revell for the review opportunity.
Posted by Unknown at 12:56 PM

Another great review, Ruth! I am quite anxious to read the rest of these books and hope that Julie continues to delight reader's with her wonderful stories - these character's are so full of spunk and possibilities and that alone keeps me glued to the pages. :)