Review: Fear in the Sunlight by Nicola Upson 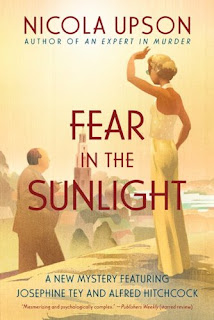 British mystery writer Josephine Tey and a select group of friends descend upon the Welsh resort village of Portmeirion in the summer of 1936 with a two-fold purpose -- one, to celebrate Josephine's milestone fortieth birthday, and two, to meet famed filmmaker Alfred Hitchcock and his wife, Alma, to consider their offer to turn Josephine's novel, A Shilling for Candles, into their next film. Between Tey and the Hitchcocks, Portmeirion has attracted a glittering and varied clientele, but one that for all its seeming privilege stands at the precipice of profound change. Facing middle age, Josephine is preoccupied with analyzing her feelings for one-time lover Marta, while the Hitchcocks, having reached the pinnacle of success in the British film industry, face the decision of whether or not to try their fortunes in the glittering American mecca of Hollywood. But personal turmoil is quickly forgotten when two women in the party are found brutally slain, bringing to light a hidden web of family secrets and long-festering hatreds, casting a bitter pall over the once-sunny party. The advent of "fear in the sunlight...where it is so unexpected" reveals the machinations of a criminal mind so depraved as to test even the mettle of the Master of Suspense...

When I was given the opportunity to review this title, I was thrilled with the chance -- murder in the glamorous pre-war 1930s, featuring one of my favorite filmmakers at the height of his powers? A heady proposition indeed. While I have only a passing knowledge of Tey, having yet to read one of her novels, I have thoroughly enjoyed other contemporary authors' ventures in casting authors as sleuths (i.e., Stephanie Barron's Jane Austen mysteries). As a long-time lover of the cozy mystery perfected by Agatha Christie, I expected something of that ilk from this novel -- an atmospheric outing with a healthy dose of history, wherein a famous author matches wits with a killer -- something akin to a real-life (and younger) Miss Marple. What Fear in the Sunlight delivers instead is something substantially less than expected -- atmospheric, yes, but more of a psychological treatise than a period mystery, with a sprawling cast of characters, where Tey's presence is so anecdotal to the plot as to be completely superfluous.

When Tey isn't debating whether or not to agree to Hitchcock's film proposal, she's struggling to define her relationship with Marta (who, it must be mentioned, is already IN a relationship with another "mutual" friend -- what. a. mess.). It's interesting to note that Tey's famous love of privacy and single status (her fiance died in the first World War) seems to have led to the assumption that she must have indulged in same-sex affairs -- and the assumption here, of something undocumented and of a highly private nature, is troubling. Literally every other character fares better than Tey here, particularly her close friend, police inspector Archie Penrose, and the Hitchcocks themselves, as well as the Draycott family, the latter of which figures largely in the horrors that unfold. Penrose is an interesting character whose intelligence and sense of justice would make a compelling lead -- one wonders why, with Tey so nominally "involved" in the crime at Portmeirion, that this isn't simply a mystery featuring Penrose and his experiences. That said, the expansive case of characters featured here is wildly confusing at first blush, and it takes about a fourth of the novel before the narrative begins to coalesce, where a darkly disturbing picture of poisonous family secrets begins to emerge, seeds planted decades earlier that grimly flower in the most incongruous of locales.

Following a painfully slow start, Fear in the Sunlight manages to gel into a page-turning mystery that plays with the idea of the the reader as voyeur, and what, if any, responsibility does the watcher bear in what unfolds -- much like Hitchcock did in his many films. Upson spins a heady web of messy family secrets, only barely glossed by a coating of Hollywood glamour -- a sheen that quickly vanishes as bitter rivalries and dangerous obsessions come to light (not to mention the stomach-turning descriptions of crime scenes). If Tey was dropped from the novel and the narrative's oft-times meandering exploration of fear and voyeurism was trimmed and tightened, allowing Penrose to take center stage and increased character development among those actually involved in the crimes, Fear in the Sunlight had the potential to be a stellar period mystery. As is, for all its flashes of interesting psychological insight or neat plot twists, I'm left wishing for what could have been rather than what was, hoping that someday, Penrose gets his own novel.

"Fear of the dark is natural, we all have it, but fear in the sunlight...where it is so unexpected -- that is interesting." -- Alfred Hitchcock

Summer 1936. Mystery writer Josephine Tey joins her friends in the resort village of Portmeirion, Wales, to celebrate her fortieth birthday. Alfred Hitchcock and his wife, Alma Reville, are there to sign a deal to film Josephine's novel, A Shilling for Candles. But things get out of hand when one of Hollywood's leading actresses is brutally slashed to death in a cemetery near the village. The following day, as fear and suspicion take over in a setting where nothing -- and no one -- is quite what it seems, Chief Inspector Archie Penrose becomes increasingly unsatisfied with the way the investigation is ultimately resolved. Several years later, another horrific murder, again linked to a Hitchcock movie, drives Penrose back to the scene of the original crime to uncover the shocking truth.

Thanks to TLC Book Tours for the review opportunity.
Posted by Unknown at 11:18 AM

Josephine Tey plus Alfred Hitchcock sounds like a great concept, but it sounds like this novel isn't exactly gripping. I do have the first one in the series from the library.

Since you've actually read Tey, I'd love to know what you think of this series. I've heard the first two books in this series are pretty well-thought of, but it seems like opinion starts to divide with the third. I thought the Hitchcock portions of this story were terrific...Tey was such a non-factor, though.

I also think the book was a slow start (http://manoflabook.com/wp/?p=8186) and also didn't know it was part of a series.

Darn, I'm sorry you didn't love this one as much as you'd hoped to, but thanks for being a part of the tour.

@heathertlc - Ya win some, ya lose some, right? ;) Seriously though, I am always glad to try a new author, and this book did inspire me to seek out the Hitchcock film that is talked about (which I'd never seen before -- Young and Innocent).