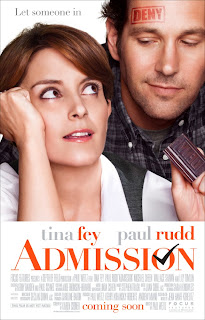 A few weeks ago Liz and Kaye and I were in the mood for some lighter movie-going fare, and so we settled on a matinee showing of Admission. Based on the previews I expected a straight romantic comedy. And while the film contains several laugh-out-loud moments, the comedic elements of the script take a backseat to the story's unexpectedly poignant exploration of coming to terms with life when it disappoints or shocks or sends you reeling. The humor is subtler, the storyline and themes more serious than I expected -- but I absolutely fell in love with this movie's quiet heart and charm. If one is going to label it a "romantic comedy," Admission fits the bill in the term's loosest sense -- which is, I suspect, why it has such middling reviews. But I'd argue that a more apt descriptor would perhaps be a thinking person's comedy, as this movie grapples with questions of love, loss, fulfillment, and purpose in a very genuine manner.

Based on the novel of the same name by Jean Hanff Korelitz (which I've not yet read), Admission centers on the life and career of Princeton University admissions officer Portia Nathan (Tina Fey). Portia is in line for promotion to the head of admissions, and with Princeton's recent slip to second in rankings the upcoming recruitment season is her chance to shine. Portia is a classic Type A personality -- driven and dedicated, she lives to excel at the job she's given her life to. But unlike her colleagues, when it comes to the applications that cross her desk she actually sees the students, taking the hopes and dreams and work that went into the applications quite literally. I loved how the applications come to life when Portia reads them, the imagined student "appearing" in her office to plead their case. It's a visual device that could have easily been overused, but the film manages to use to just often enough to underscore the heart beneath Portia's desire to live life according to her plan. 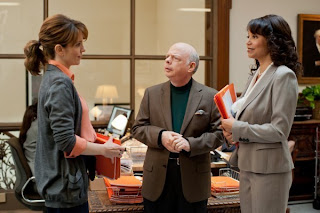 But as the saying goes, the best laid plans oft go awry, and Portia faces her world unraveling on multiple personal and professional fronts. Her long-time professor boyfriend, Mark (Michael Sheen) breaks up with her DURING the annual faculty lunch she hates to co-host, leaving her for his pregnant (surprise!) girlfriend (double surprise!) and fellow professor, the delightfully witchy Helen (Sonya Walger). Sheen is absolutely HILARIOUS as Mark, delightfully awkward as he finds himself living a life he never wanted -- i.e., one with kids. Getting unceremoniously dumped in so public a fashion is the first blow, and while the awkward dance her colleagues undergo -- the whole "do we/don't we" say anything, do we address the proverbial elephant in the room?? -- is played for laughs, it underscores the very real threat Portia faces (and Fey portrays with such sensitivity) -- how does a control freak survive when one's life spirals into chaos?

Meanwhile, Portia's job proves more difficult than usual as John Pressman (Paul Rudd), the head of a unconventional college readying its first graduating class, hounds her into visiting his school to meet a student he feels would be exceptional Princeton material -- Jeremiah (Nat Wolff), who turns out to be the very definition of eccentric. But John has an ulterior motive -- an acquaintance of one of Portia's college friends, he's aware of a secret Portia's kept hidden for nearly twenty years -- the child she gave up for adoption. He's sure that Portia is Jeremiah's biological mother, and equally sure in his conviction that Jeremiah needs familial roots and the straight-laced admissions officer desperately needs loosening up. 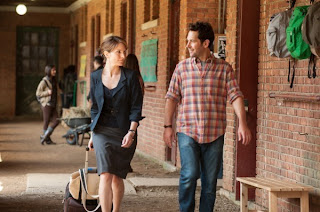 Now, no matter how well-intentioned John may have been in his single-minded quest to reunite biological mother and child, the manner in which in goes about this is, of course, RIDDLED with ethical issues to say the least. He's extremely thoughtless at the very least. But that aside, as a means of forcing Portia to confront the past she's tried so hard to escape -- namely, her prickly relationship with her mother -- it's a masterstroke. Motherhood is a role Portia seems to have assiduously avoided thanks to her issues with her own upbringing (her mother being a radical feminist who repeatedly told Portia she was the product of a one-night stand).

For his part, John has just as many issues regarding his family and future to work through as Portia, though he comes at them from the opposite perspective -- where Portia is conservative, straight-laced, and grounded, John is a free-thinking, devil-may-care liberal determined to go wherever the wind (often quite literally) takes him. The conflict there is in his travels John takes it upon himself to adopt Nelson (Travaris Spears), the orphaned son of friends he made while doing relief work overseas. John is determined to raise his son without the trappings of wealth and eccentricity (to say the least) that he dealt with as a child -- the only catch being that Nelson desperately wants roots and a sense of normalcy, qualities he see's in Portia's "boring" life. 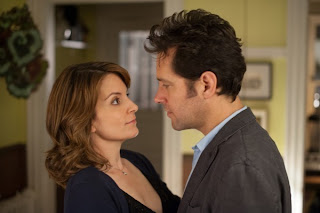 One of the most refreshing aspects of Admission lies in how both Portia and John have to overcome a multitude of past baggage and mistakes for their chance at a happy ending -- in most films of this ilk, the balance toward change always seems weighed toward the female lead, no? Here, both of them have been hurt, both have made mistakes, both have fought with everything in them to escape the self-described stigma of their parents' choices. And while this film doesn't offer easy answers or the perfect happy ending, wrapped and tied with a beautiful bow, I found its ending not only refreshingly realistic but also saturated with grace -- forgiveness and the hope of second and third and fourth chances -- as Portia and John explore their fledgling relationship and experience a renewed relationship with their mothers (especially on Portia's side). Wounds aren't forgotten or glossed over, but rather acknowledged, and those moments of raw honesty hold the promise of forgiveness and healing.

Tina Fey and Paul Rudd are fantastic together with a thoroughly appealing on-screen chemistry (seriously, there's one moment in the film when John calls Portia "exquisite -- you. will. DIE). I just loved Fey here -- she just embodies everything you want a smart and intelligent Hollywood leading lady to be, you know? The supporting cast shines with Wallace Shawn as Clarence (nevermind that the man has a film career that spans over three decades, he will always and forever be Vizzini from The Princess Bride) and Gloria Reuben as Corrine, Portia's professional rival and hilarious office frenemy. But best of all is Lily Tomlin as Susannah, Portia's ex-hippie mother. People, she was absolutely hilarious and stole nearly every scene she appeared in (especially the whole drunk-dialing Portia while riding a bicycle).

This movie was a surprising charmer -- and if you're in the mood for some thought-provoking, subtly humorous movie-going fare Admission is well worth the ticket price or rental. If you've seen (or read the novel) it I'd love to hear your thoughts!
Posted by Unknown at 4:07 PM

I heard the book was really really good.

Great review! I'd really like to see this one. I haven't read the book either, but a review I read made me want to. Sigh. My tbr pile just keeps growing!

Also, I noticed that the trailers for this made it seem just like a rom-com, as you said. And the review of the book mentioned that it isn't really. It seems like another case of Love Happens. Have you seen that movie? The trailers made it seem like a fun comedy but while it was definitely a great movie, comedy isn't the genre I'd file it under. The people who make trailers obviously need to actually watch the movie or something, so they can do a better job! ;)

@Kara - Thanks! I haven't seen Love Happens, but I remember when it came out it seemed like it was getting knocked for not being funny enough or something like that. I'd kinda like to check it out now, thanks for the rec! :)