Review: The Assassin and the Underworld by Sarah J. Maas 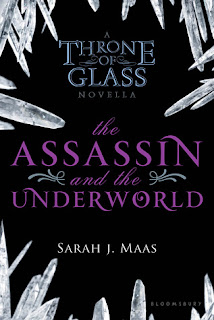 After a summer in veritable exile, training with the Mute Master and his Silent Assassins in their desert fortress, Celaena Sardothien is at last free to return to the Assassin's Keep and resume her place as Arobynn's second, Adarlin's Assassin -- if she chooses. She determines to buy her freedom from the King of the Assassins, but her bold plan to flaunt her newly-won freedom are overshadowed by Arobynn's apparent regret for the beating that preceded her desert summer. Arobynn is curiously repentant, plying the luxury-loving Celaena with gifts and offering her a plum assignment she can't refuse -- one that promises to strike a lasting blow against the heart of an institution she finds abhorrent. Tasked with assassinating a man bent on betraying fellow countrymen attempting to free slaves, Celaena throws herself into her work -- but all is not as it seems, and at the heart of this seemingly straightforward assignment lies a betrayal that even Rifthold's greatest assassin may not survive.

I am fast becoming completely addicted to the world of Maas's Throne of Glass series, and this third prequel novella to her series debut is perhaps her best yet. I love the character of Celaena -- she is such a paradox -- a strong-willed, capable killer and a lover of all things luxurious, coldly calculating and willfully tempestuous. She's a deceptively mature heroine, as her killer skill set masks her youth. But over the course of three novellas its become increasingly apparent that Celaena is headed for a steep learning curve (particularly where her dishy fellow assassin Sam is concerned), and that's why I relish her questions in this installment, her struggle to come to terms with her future, with how to cope and adapt to events beyond her control.

The Assassin and the Underworld is the richest installment of Celaena's adventures yet, granting the reader fascinating glimpses into the culture of Celaena's world. From the lavish pageantry of "bidding" on first-time courtesans (*shiver*) to the musical culture and nightlife of Adarlan, Maas is developing a richly-textured world that mixes the intensity of The Hunger Games with the romantic trappings of a fairy tale. I'm more eager than ever to continue exploring Celaena's world. Bravo, Ms. Maas.

When the King of the Assassins gives Celaena Sardothien a special assignment that will help fight slavery in the kingdom, she jumps at the chance to strike a blow against an evil practice. The misson is a dark and deadly affair which takes Celaena from the rooftops of the city to the bottom of the sewer–and she doesn’t like what she finds there.
Posted by Unknown at 11:28 AM