Review: Look to the East by Maureen Lang 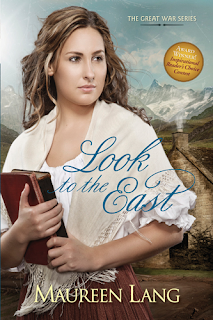 Raised by a loving adopted family, Julitte Toussaint nevertheless struggles with her identity and place in Briecourt, a small town bitterly divided by a decades-old feud pitting Toussaint against de Colville. But in the first weeks of the conflict that would come to be known as the Great War, Toussaint and de Colville alike find themselves bidding farewell to fathers, sons, and brothers, called upon by a common love of country to fight the encroaching menace of the German army. Despite sharing a common enemy and worry for imperiled loved ones, the bitter partisanship that divides the town continues to rage unabated -- until the fateful day the war comes home to Briecourt in the form of German soldiers. And thus the citizens of Briecourt are faced with a greater threat than the prejudices that have for so long divided neighbor against neighbor -- soldiers who demand obedience, who commandeer supplies, and seek to keep a frightened populace under control with an iron hand.

The occupation becomes something more than simple survival when Julitte stumbles upon the town's greatest secret -- hidden refugees, including wealthy, handsome Belgian businessman Charles Lassone, caught behind enemy lines before he was able to return to his homeland and join his countrymen in their fight against Germany. The attraction between them is immediate, giving Julitte hope of not only a future following the war but of a life free from the shadow of her past. However, Charles isn't content to sit out the war in hiding, and bolstered by his love for Julitte and inspired by her faith in a God who would have a plan for even his dissolute life, he determines to escape Briecourt and join the Allies. But in a town physically occupied by the enemy and spiritually divided by a poisonous prejudice, Charles's risky bid for freedom threatens to destroy more than his hope for a future with Julitte...

Maureen Lang's The Great War series has been on my radar for quite some time. She's one of the first inspirational-market authors in my experience to explore the rich history of the first World War, which is a natural extension of my fascination with the second World War, as the roots of that later conflict were first birthed in the horror of the trenches. And thanks to the popularity of Edwardian era set programs such as Downton Abbey and most recently, Mr. Selfridge, Lang's fiction set during this time period is surely poised for fans new and old alike to discover her evocative, poignant portrait of ordinary people struggling to survive extraordinary times.

While the passage of time is a bit too fluid for my liking -- the novel covers approximately two years, but the actual passage of time is only remarked on in the haziest of terms -- Lang's setting and depiction of the struggles of an occupied people are one of the novel's greatest strengths. I was powerfully reminded of a recent miniseries I discovered -- Monsignor Renard, a Masterpiece production detailing the travails of a French town under Nazi occupation. In both book and film the terrific strain the townspeople were forced to endure, the overwhelming force brought to bear to keep a subjugated people in line are powerfully told -- the means not always involving outright brutality, but more often than not psychological warfare, instilling in the conquered a paralyzing fear of action -- anything to avoid reprisals. The suspicion Julitte's best friend, Ori, faces for collaboration is a particularly effective illustration of the manner in which the occupiers could break a people's will -- by tearing the fabric of trust between family and friends. The long-standing feud Lang puts in play adds another layer of conflict, as the lack of any true community in Julitte's hometown is the first front in the war she and her neighbors must wage if they are to survive.

I loved Julitte and Charles's romance -- achingly sweet, replete with stolen glances and dreamed-of kisses, but stitched through with a refreshingly genuine, honest exploration of spiritual matters and the importance (initially on Julitte's side alone) of a shared faith. Charles is a particularly well-drawn hero, as his struggle to define himself outside the parameters of his family's name and wealth and the accompanying life of privilege he so enjoys is sorely tested by the advent of war and its rapid destruction of his high-minded ideals regarding the conflict. The stark reality of probable, imminent death forces Charles to confront not only what he believes about patriotism but himself and his goals and purpose in life -- heretofore directionless without the grounding of the faith his sister and Julitte so fervently share. And while I loved Julitte's gentle spirit and quiet faith, one aspect of her characterization was troubling -- the to my mind unnecessary inclusion of the townspeople's belief that she is some sort of miracle-worker. It wasn't explored in great enough depth to really substantively further ostracize Julitte (any moreso than her status as adopted Toussaint, child of a leper colony). That aside, Julitte's struggle to reconcile the tenets of her faith with the evil and hardship she encounters under German occupation is among the freshest, most honest illustrations of a believer grappling with the unthinkable in fiction of this ilk.

Look to the East is a fascinating glimpse into a world at war and its impact on the lives of a handful of ordinary citizens called to make extraordinary sacrifices. Lang's research is stellar, transporting readers to a world under siege, where an entire way of life undergoes irrevocable change in the crucible of war. With clear, articulate prose and a deft hand weaving matters of faith, doubt, and identity throughout, through Julitte and Charles's experiences Lang weaves a rich tapestry detailing the French wartime experience. For that matter, it is so refreshing to read war-set fiction that focuses wholly on the everyday European's experience (while Charles is half-American, it is an incidental plot point) -- so often American authors focus on the wartime experiences of Americans (understandably so). I fell in love with the history and Lang's well-drawn characterizations -- with a tighter, more clearly articulated timeline and a more focused plot climax (Julitte's Greek grandfather is a poorly-conceived deus ex machina in an otherwise carefully-meted story arc), I have high hopes for my future experiences delving into Lang's crisp prose and lovingly-crafted, relatable characters.

The small village of Briecourt may be isolated from early battles of World War I, but a century-old feud between the de Colvilles and Toussaints rages in the streets. Despite being adopted as a child, Julitte Toussaint endures the scorn of the de Colvilles more than most, given the folklore surrounding her heritage.

Then everything changes the day the German army sweeps in to occupy Briecourt, trapping a handful of outsiders behind enemy lines, including Belgian entrepreneur Charles Lassone. When Julitte discovers Charles hiding in the church basement, an unexpected and dangerous love blossoms between them.

But heroes aren't made in cellars. Eager to join the Allied forces -- and prove himself worthy of Julitte's love -- Charles convinces the de Colvilles and the Toussaints to finally work together to smuggle him out.

Yet with the life of every villager on the line, who can be trusted? And when the line between ally and enemy is blurred, will faith and courage be enough to sustain them all?
Posted by Unknown at 7:33 PM

I remember reading this book a few years ago and loving the history (which I thought was the best part) but not really clicking with the characters unfortunately and thus I never continued with the series.

@Bookworm1858 - The history is just fascinating here, isn't it? I definitely want to continue the series but it may be a while as I have to catch up on some current review commitments. :)