I'd almost forgotten about this project, and then these photos surfaced: 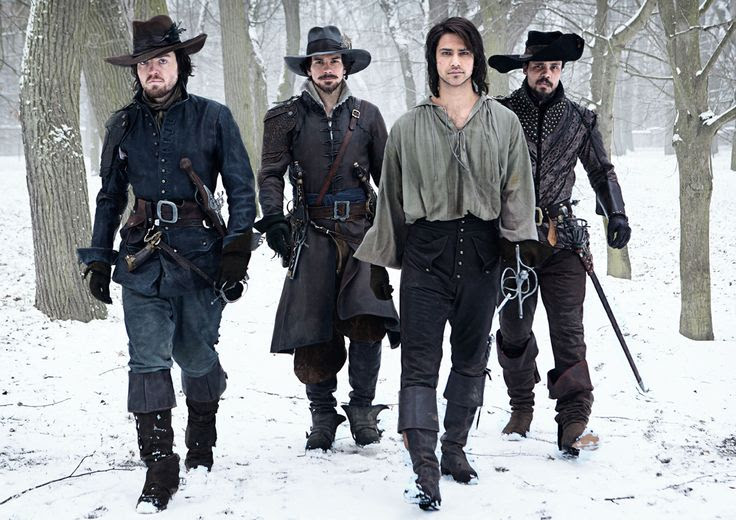 Here's the info about the show from the press release accompanying the photos:

BBC AMERICA has released the very first photos for The Musketeers, their new 10-part action drama set for 2014.

Created by My Week with Marilyn‘s Adrian Hodges, Musketeers takes the characters from Alexandre Dumas‘ classic novel and puts them on the chaotic, lawless streets of 17th century Paris, where soldiers Athos, Aramis and Porthos serve as Louis XIII’s personal bodyguards. They meet and befriend D’Artagan, a skilled fighter who is dead-set on achieving justice for his father’s death. Luke Pasqualino (Skins, The Borgias) stars as D’Artagnan, with Tom Burke (The Hour) as Athos, Santiago Cabrera (Heroes) as Aramis and Howard Charles as Porthos. (The Hour‘s Peter Capaldi, Tamla Kari, Maimie McCoy, and Hugo Speer round out the ensemble.)

You had me at Santiago Cabrera.

I'd forgotten about this one also, Ruth - so glad it's finally coming true. Hope when this one comes to an end it won't shatter us like Merlin or Robin Hood do. Here's to hoping! :)

MORE Musketeers? Not that I won't watch, of course. ;)

I'm excited for this one! The Three Musketeers is such a great story. It will be interesting to see how closely they stay to the book. I hope they don't stay too closely when it comes to Constance.

Yay for the Musketeers! Can't wait!

@Karrie - Me too! I wouldn't be surprised if this is pretty "revisionist," along the lines of how Robin Hood or Merlin was made...and I'm totally okay with that. :)

Hot hot hot! I think I need to check out these new cute Musketeers.