Review: Wings of a Dream by Anne Mateer 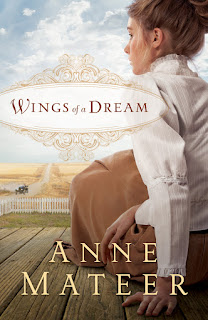 Rebekah Hendricks dreams of a life far beyond her family's farm in Oklahoma, and when dashing aviator Arthur Samson promises adventure in the big city, she is quick to believe he's the man she's meant to marry.

While she waits for the end of the Great War and Arthur's return, her mother's sister falls ill. Rebekah seizes the opportunity to travel to Texas and care for Aunt Adabelle, sure that her glamorous and exciting life is about to start.

But the Spanish flu epidemic changes everything. Faced with her aunt's sickness, Arthur's indecisiveness, and four children who have no one else to care for them, Rebekah discovers she must choose between her desire to escape the type of life she's always led and the unexpected love that just might change the dream of her heart.

Rebekah Hendricks wants nothing more than to escape her mundane Oklahoma farm existence. When a handsome flyer turns her head with promises of excitement and adventure, she's sure he's the man she is meant to marry who will save her from a conventional life. But the Great War still rages in Europe, and with her aviator training at an army camp in Texas, Rebekah jumps at the chance to travel to her aunt's home in Texas, sure the time spent tending her ailing relative will be but a brief stop on her road to adventure. But nothing in Rebekah's sheltered life has prepared her for what she faces when she arrives. The dreaded Spanish flu is ripping through the small farming community, leaving scores of grieving family and friends in its wake. When her aunt succumbs to the flu, Rebekah is left as the reluctant caretaker of her aunt's charges -- the four young Gresham children, left orphaned by the death of their mother in childbirth while their father fights in Europe. As the children and community wend their way into her heart, Rebekah is faced with an unexpected realization when the life she's always scorned becomes the dream she can't bear to live without. But is she brave enough to surrender her dreams to God's plan?

With her debut offering Anne Mateer focuses on an aspect of history that I have seen little (if ever) addressed in fiction -- the World War I American homefront and the horrific and devasting impact of the Spanish Influenza epidemic. Wartime homefront stories always intrigue me as I think too often books and films about either of the two World Wars focus heavily on the overseas action. But as Mateer so deftly illustrates here, the shadow of war cast a heavy pall over every aspect of homefront life, from rationing ("Hooverizing") meal plans to empty places at dinner tables and the fragile hope that loved ones would return unscathed. The ruinous impact of the Spanish flu and the fear and sorrow an outbreak left in its wake is one of the strongest aspects of the novel. Mateer really shines when bringing to life the stress and dangers associated with this epidemic -- in an age of vaccines and advanced medical care it is hard to fathom the utter devastation of this outbreak, but Mateer recreates the emotional toll of this epoch in America's history with aplomb.

As a heroine Rebekah has much to recommend her -- despite the occasional lap into rather excessive levels of immaturity she has a strong sense of right and wrong and responsibility to family and those less fortunate than herself. In many respects a child herself, merely on the cusp of womanhood, Rebekah has a lot of growing up to do in this novel -- though she doesn't yet realize it, her quest for adventure is really a journey of self-discovery, and a powerful reminder that life is lived best when one surrenders to God's leading. Rebekah possesses a lot of spunk, often overshadowed by her immaturity, a point driven home by the first-person narration. First person narration and I can be rather hit-or-miss, and personally I would have preferred third-person, and greater insight into secondary characters such as the children's father, Frank, or Irene, Rebekah's first friend in town. With first-person, Rebekah's internal dialogue and propensity for rashness and immaturity got a bit repetitive, slowing the narrative. Mateer has a knack for creating a compelling supporting cast, and I hope that in future novels characters of Frank and Irene's ilk will receive more "screentime."

My favorite aspect of this debut was Rebekah's atypical romance. Her realization that the greatest adventure is in a life well-lived, surrounded by loved ones, is powerfully brought to fruitition. Wings of a Dream is an engaging, promising debut and I look forward to Mateer's next offering. Her affinity for exploring less "publicized" aspects of history intrigues me and marks her as an author to watch.
Posted by Unknown at 2:39 PM

I read this and really enjoyed it. I wasn't sure I could relate to such a young heroine but I had no problem. She seemed very realistic, with her age-appropriate reactions in the romance department! And the historical details and setting were great. I know I'll be reading Anne's next book.

Thank you, Ruth. I appreciate your thoughtful review. I know first person isn't for everyone (even my sister took issue with me on that!), but I'm glad that you were able to enjoy the story anyway. Those less "publicized" aspects of history are my absolute favorite to explore. :)

@Anne - Thanks for stopping by, my friend! I look forward to your next book...and no worries on first person, I know it is good to stretch myself reading-wise every once in a while. :)

@Holly - Hope you enjoy it! I love the fact that Anne has a passion for history that one doesn't often see in fiction. :)