Review: The Bridegrooms by Allison Pittman 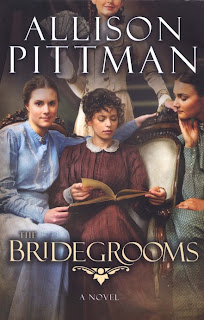 Tragedy hit the Allenhouse family on a hot summer night in Ohio when a mother of four vanished. Eight-yeara-old Vada virtually grew up overnight and raised her three younger sisters while her father lost himself in his medical practice in the basement of their home.

Now Vada is a grown woman, still making her home with her father and sisters. Her days are spent serving as an errand girl for Cleveland's fledgling amateur orchestra; her evenings with Garrison Walker, her devoted, if seemingly passionless, beau.

Dizzying change occurs the day the Brooklyn Bridegrooms come to town to play the Cleveland Spiders and a line drive wallops the head of a spectator. The fan is whisked to the Allenhouse parlor, and questions swirl about the anonymous, unconscious man.

Suddenly, the subdued house is filled with visitors, from a flirtatious would-be sportswriter to the Bridegrooms' handsome star hitter to the guilt-ridden ballplayer who should have caught the stray shot. The medical case brings Dr. Allenhouse a frustration and helplessness he hasn't felt since his wife's disappearance. Vada's sisters are giddy at the bevy of possible suitors. And Vada's life is awakened amid the super-charged atmosphere of romantic opportunity.

Allison Pittman follows up Stealing Home, her first baseball-themed novel, with The Bridegrooms and the story of one week that changes the lives of the Allenhouse sisters forever. Left bereft of their mother’s care as children, when the woman chased the promise of excitement and romance with a handsome stranger, the girls and their loving, if prickly, father have made an art of survival. The eldest, Vada, has especially sacrificed much in order to step into her mother’s shoes at the tender age of eight – as the de facto mother figure, she has sacrificed a lifetime of girlish dreams in the name of responsibility. The arrival of a dashing star baseball player and a wounded spectator bring a bevy of heretofore unimagined romantic possibilities to the Allenhouse home, leaving Vada questioning her future. Is true romance the giddy feelings elicited by a handsome stranger, or the constant – if boring – faithfulness of a long-time local suitor? Startlingly different yet fully realized, Vada and her sisters only commonalities are blood and a desire to be loved for who they are. The journeys they take to realize the hope of romance are as varied as their personalities, and therein lies the charm and power of The Bridegrooms.

With The Bridegrooms, Pittman proves that her gift for rendering small town Americana and all its accompanying charm on the page is unparalleled. From the excitement surrounding an amateur orchestra’s performance to the thrill of a baseball game to sister Hazel’s involvement in the burgeoning women’s suffrage movement, Pittman captures the heartbeat of small town, turn-of-the-century life. I loved how Pittman explores the ramifications of the mother’s abandonment on her daughters' lives – this is not an issue I can recall seeing often explored in Christian historical fiction, and I applaud her for the raw honesty with which she explores the fallout vis-à-vis the daughters’ relationships with their father, each other, and how they view themselves. Each sister’s personality, hopes, and dreams are unique and well-drawn, bringing to life the mores and conventions of a forgotten era and reminding the reader with startling clarity that the more things change, the more one constant – human nature – remains predictably unpredictable.

The heart of the novel is an examination of romance and romantic ideals – it is perhaps ironic to find such an honest exploration of such in a story whose appeal lies largely in its nostalgic charm. Against a backdrop that a 21st-century reader such as myself is too often tempted to idealize, Pittman balances her charming depiction of the minutiae of the era with an unflinchingly honest look at four very different women and their heartbreakingly honest desire to love and be loved. Whether you see yourself in one or all of the Allenhouse sisters doesn’t matter, for each woman’s journey is a sheer delight to watch unfold. Youngest Lisette’s obsession with the trappings of status nearly blinds her to the true treasure of unfettered adoration, while Hazel’s good nature masks a fear of rejection that leaves her hiding behind letters, hoping her spirit will capture a man’s heart where she fears her looks fall short. Althea, silenced by her mother’s abandonment, is the steadiest and most loyal sister, but she must decide if her faith can speak louder than the fears that keep her silent.

And then there is the centerpiece of the novel – the gloriously conflicted Vada, caught between her dreams and her reality. Through Vada, Pittman reminds readers of the blunt truth of the fact that emotions can lie, and true romance is not simply a giddy feeling or a handsome face (that’s nice, not gonna lie), but a decision made anew every day and walked out in attitude and action. Vada’s beau Garrison may *seem* staid and boring, at first blush not fitting the ideal hero of a romance – but his faithfulness and loyalty will melt your heart. In each character’s story, Pittman reminds us that true romance SHOWS UP every day, no matter how one feels or is tempted to respond in a fit of pique. The love that each Allenhouse sister discovers during the tumultuous week the Brooklyn Bridegrooms come to town mirrors the faithfulness of a God who longs to meet us where we are and will catch us when we fall. Pittman’s tale is rich in nostalgia and timeless in the truths it reveals about our desire to be known and loved, and that love lies often where one least expects it – right in front of our eyes.

Suggested film pairings: In the Good Old Summertime and Take Me Out to the Ball Game -- but only if you like classic musicals. *wink*
Posted by Unknown at 3:18 PM