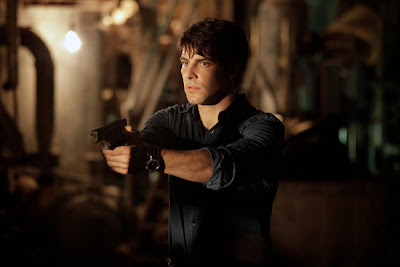 Grimm's third episode, BeeWare, draws its inspiration from a more obscure Grimm story ("The Queen Bee") and interestingly enough a 1955 Joan Crawford film, from which the show borrowed its opening quote -- "She'll sting you one day. Oh, ever so gently, so you hardly even feel it. 'Til you fall dead." It was a bold move, in my opinion, to delve into more obscure Brothers Grimm territory in only the show's third episode -- but the resulting product more than compensated for any doubts I may have had by delivering a wonderfully intriguing, deliciously creepy hour.
The episode opens with a group of presumed strangers boarding a streetcar, where the lamest flash mob I've ever seen on film breaks into a rousing rendition o the "YMCA." When the dance is over, a well-dressed professional woman lies dead with a large puncture wound in her neck, all signs pointing to anaphylactic shock. An autopsy finds ridiculously high levels of bee venom in her blood -- the only questions remaining, how was it administered and who wanted her dead? The victim, a lawyer for a prominent local firm, was working on a case that shut down a "family-owned" paper mill company. While Hank (Russell Hornsby) and Nick (David Giuntoli) interview the flash mob witness pool, one of the members -- who all suspiciously have the same story (lemmings, much?) -- is so edgy he can no longer hide his identity and morphs into a giant bee-like insect.
What's fascinating to watch play out in this episode is the relation of the bees to Nick and their role in the Grimm universe. Monroe (Silas Weir Mitchell) explains that the bees are mellifers, messengers in the world of fantastical creatures that Nick is now seeing every where he turns. The mellifers only have one natural enemy -- the hexenbiests. This raises an interesting question -- why are all three hexenbiests in this episode lawyers? Is that their only job in the "real" world? The mellifer/hexenbiest animosity also raise a VERY interesting dilemma for Nick, one I hope and expect will play an ever larger role in his life now that he's aware of his calling as a "Grimm." As his aunt instructed him in the first two episodes of the series, he's supposed to hunt down the bad creatures -- but what happens when creature on creature "warfare" counters the law Nick as a police officer has sworn to uphold? 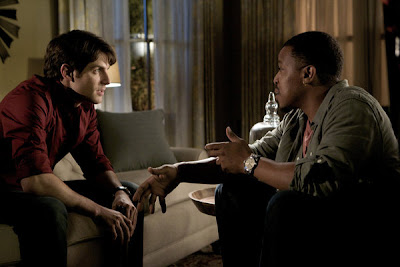 This concern comes into play when Nick discovers that the final lawyer who worked on the paper mill case is Adalind Schade (Claire Coffee), the hexenbiest who attempted to kill his aunt in episode one. In the short amount of time he's been aware of his Grimm powers, Nick's come to realize that hexenbiests aren't creatures to feel any sympathy for -- but his job calls for him to protect Adalind, in spite of the fact that the mellifers are actually on his side. The scene where she baits him with this knowledge, essentially blackmailing him into protecting her, contains a nice amount of tension -- especially since Nick isn't well-versed enough in the Grimm world to know or understand what the mellifers are trying to warn him about/protect him from.
Speaking of Adalind, I am more curious than ever about the hexenbiests' relationship with Nick's boss, police Captain Renard (Sasha Roiz). If Renard is wholly invested in the fairy tale world, why hasn't he made a move against Nick? Is he hoping to turn him, running a bigger game, or is something else at stake, a secret that has yet to be revealed? Theories? :)
The buddy chemistry between Nick and Monroe is a highlight of this episode. Mitchell is just hilarious and I'm loving his very dry sense of humor. It was especially funny to see the "dog jokes" play out, as Nick bribes Monroe to employ his blutbad sense of smell with a bottle of Bordeaux. Monroe's all offended until he realizes he has something to gain. *wink* I'm really getting curious about his backstory -- for someone who comes from a long line of Grimm haters, one gets the feeling he's really enjoying his "work" with Nick though he'd probably die before admitting it. It was also nice to see Nick's girlfriend Juliette (Bitsie Tulloch) have something more to do than just welcome Nick home -- she doctors Hank's bee stings and offers some veterinary insight into the habits of bees. It was a limited scene but a welcome expansion of her role.
Grimm has quickly become one of my favorite new shows of the fall season, all the more so because I didn't expect to like it as much as I do AT ALL. The fairy tale/police procedural mash-up is just genius so far in the show's run. The Oregon settings are lush and almost otherworldly at times, the perfect backdrop for fairy tale monsters to come to life. I am loving the excellence with which each episode is filmed and the shots are framed, very reminscent of film noir -- intense and absorbing but thus far not *too* creepy. :) But most of all, the cast is clicking unbelievably well -- especially Nick and Monroe. The humor sets the show apart, and coupled with an intoxicating, suspenseful atmosphere -- well, with fairy tales turned on their heads what's not to love?
Posted by Unknown at 2:32 PM

I am enjoying the overall series very much, but I think this was my least favorite episode. It was just a bit... meh.

@Charity - When I intitially watched this episode when it was broadcast, "meh" was more my reaction too -- I think it was the obscure story references. But when watching it again, I got more into the mythology I felt the show was trying to set up -- and the Eddie scenes, oh they were definitely worth a rewatch! :) Not the best of the series thus far, though, I definitely agree with you there!

Well, Renard means fox in French, and we know he speaks French, so... any fairy tales with foxes in them? :)

I really liked this episode, too. I loved that all the bee people wore yellow. The art direction on this show is killer.

@heidenkind - The art direction on this show definitely needs some Emmy recognition next year. It is so so good.

EXCELLENT call on Renard meaning fox in French...WHY DIDN'T I THINK OF THAT??? :P Hmmm...must give this some thought...