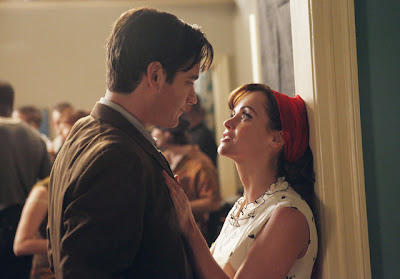 ﻿Pan Am's seventh episode was an interesting mix, facing the racial tensions of the 1960s head-on through Laura's (Margot Robbie) eyes, while underscoring the fact that these characters -- in this case the stewardesses -- continue to LOSE THEIR FRIGGIN' MINDS when it comes to men. *sigh*
We're at the point in the show where supporting characters make welcome second appearances -- in this case, Mike the reporter (Colin Donnell) who was charmed by Maggie (Christina Ricci) on the Berlin flight. That was an unexpected but welcome moment of continuity in a freshman drama. Apparently they have a little somethin' somethin' going on -- and I've gotta say given Maggie's rather bohemian, free-wheeling character I am not really surprised. :P In Maggie's case, such shenanigans make some sense -- when it comes to the Cameron sisters, however, that's another story (or so I thought based on their introduction). But given the fact that apparently a current show *has* to have characters sleep around to be relevant/edgy/whatever, I shouldn't be surprised, right? I'm glad this show doesn't stray into terribly explicit territory -- but the lack of relational morals, I guess you could say, is a frustration in a show that otherwise I've really grown to love over the last few weeks. (Rant over.)
Since Laura moved in with Maggie, it's apparent she's become something of a wild child, getting completely sloshed at a debriefing party where the guests of honor are the last flight's passengers -- a group of sailors very, VERY happy to be on leave. In a brief flashback to the beginning of the flight, the girls are playing truth or dare, and Laura reveals she posed nude for the photographer assigned to do a magazine story on Pan Am stewardesses. (Seriously, HOW STUPID IS THIS WOMAN?? Like these pics are not going to back to haunt her -- what a DUMMY!) Laura's this weird mix of wildness and naivete -- the latter particularly evident in her interactions with Joe (Gaius Charles), the lone black sailor on the flight. The two made a connection, but Laura's not quite at ease because of his race. She doesn't confront her feelings until Joe is beaten up just for being seen in public with her. This is a huge wake-up call for Laura, and probably her best moment on the show -- until she decides he should be her "first." Girl, you've known him for ALL OF TWO DAYS. Does no woman on this show worry about getting pregnant? That aside, Joe was a real charmer, and I wouldn't mind seeing him make a return appearance. 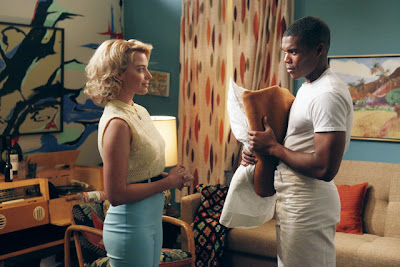 ﻿Meanwhile, Kate's (Kelli Garner) relationship with her Yugoslavian boyfriend Niko (Goran Visnjic) is about to go completely south. When she learns that he's about to leave for home, worried for his safety she calls Richard (Jeremy Davidson) for help. When he sends the CIA to her apartment in an effort to forcibly turn him into a US asset, Kate is horrified (they drag him out wearing a HOOD! oh the drama!). The Kate and Niko storyline is pure soap opera but gosh I have to admit that that in this episode I loved it. She's the frustrated but noble idealist, he's the wounded lover facing near-certain death...the type of drama (tinged with big implications -- personal turmoil highlighting larger political issues of the time) this show does really fairly well. I look forward to Visnjic's return to the show, should Pan Am continue to find its legs ratings-wise.

Besides the spy storyline, my favorite moment of this episode came courtesy of Colette (Karine Vanasse) and Dean (Mike Vogel). After (hopefully) coming to his senses regarding Ginny, Dean and Colette share a really sweet moment during the sailors' flight. During the truth-or-dare game, Colette revealed that she's always dreamed of flying -- and later during a shared moment alone together in the cockpit, Dean lets Colette take Ted's (Michael Mosley) seat and turns the controls over to the co-pilot's control. The look on Colette's face is just priceless -- Dean needs to realize what a gem she is ASAP. Thus far, Colette is by far my favorite of the stewardesses. Vanasse is a terrific actress, able to convey such depth of emotion with a simple look or half smile, and character-wise Colette seems the -- wisest, perhaps is the word I'm looking for.

Going forward, I would really love more Colette centered stories -- she really hasn't been featured since the Berlin episode. Plus, she has the potential to redeem Dean in my eyes from the whole Ginny mess. :P I also really want to see Ted's character featured more prominently -- he's rather been in the background since the Rangoon episode. It's interesting that I felt Laura made Ted more responsible, etc., while she's gotten wilder as the show has progressed. Also -- now that Kate's had her heart broken and woken up to the harsh realities of spying, I hope she'll be given missions with greater stakes -- and that she'll handle them with some aplomb. The Niko relationship has accelerated her maturation, a bit too fast perhaps, but nonetheless needed in the long-term. Looking forward to the show's next flight! :)
Posted by Unknown at 4:23 PM

This episode was my favorite! I loved Joe and like you I hope he makes a return. I also love the potential for a Dean/Colette relationship...why can't people ever see what's staring them right in the face?! LOL! Have you heard anything about this show getting picked up for a whole season? *Fingers crossed*

I loved this episode, especially the Kate and Niko scene at the end. Hopefully it does get picked up for a full season.

Laura struck me as incredibly dumb in this episode -- I didn't live in that era and even I know the danger she posed to Joe simply to be seen in public with him. This isn't about tolerance, Laura -- this is about caring enough for him not to get the snot beat out of him! Also, I'm annoyed that the writers keep hinting at these little romances between stewardesses and captains and then shoving both characters into bed with other people. It ruins it, so I cannot really root for the cuter couples to get together.

Overall, I'm enjoying "Pan Am," I just wish it wasn't as cavalier with its leading ladies sexuality.

@Renee - Seriously. Though I do wish that given the obvious Dean/Colette attraction that Dean hadn't jumped into bed with Ginny. Stupid. :P As far as a full season goes -- not yet, though last week (I think) ABC ordered an additional five scripts -- keeping my fingers crossed!

@Charity - I get where you're coming from -- but I read Laura as more naive than just stupid. I feel like she's been so sheltered (mom seemed super controlling) that her disconnect between real life and consequences is going to require a steep learning curve...of course who knows how all this will play out as the show continues.

Anyways...I completely agree with your last statement...the cavalier attitude towards relationships over these last 2-3 episodes is the main sour note regarding the show, as far as I'm concered... *sigh*

I haven't read this post yet because I'm about two or three episodes behind on Pan Am! But I just wanted to respond to your comment on my blog. :)

Yes, I love those gorgeous covers! Actually, that's what inspired the contest I entered, and the prizes include a copy of one of those books. I love the Emma one. :) Also, they're continuing the Threads series with three new embroidered books coming out next year. They're so beautiful- you can see them here (http://www.feelingstitchy.com/2011/11/more-embroidered-book-covers-to-look.html).

@Kristin - Sorry it has taken me so long to respond to this, I thought I had (but my e-mail inbox overflows!). Thanks for sharing the link about the new Threads covers -- they are gorgeous too!